Coming To A Kindle Near You…

Several years ago, for Valentine's Day, I wrote a short story originally titled "Stupid Cupid." Full of promise, I sent it off to a romance magazine, and waited.

Eventually, it got all moldy and stinky on my laptop so I wrapped it in Saran wrap, stuck it in a folder, and waited some more like a good little unrepresented author.

I've done the same thing with my novel, except for the occasional attempt to entice an agent to represent my work. Then I got a Kindle

for Christmas, and you know what? I love it. I downloaded The Hunger Games

on Christmas morning. I liked that book so much that I downloaded the second one

in the series one night after I got home from work. Upon finishing that one, I bought the final book in the series

. That was at about two am. And all three times, I never left my house. Which was good, because I was wearing mt PJ's and smelled a little like horse.

And here is what I have to say about eBooks.

I love them. I love my Kindle. I love the cover with the light

Mr.SD bought me. I love the fact that I don't need book marks. I enjoy having more than one book in the same compact book-like package. And apparently, I'm not the only one who likes it.

Let me emphasize one sentence of that small paragraph: E-book versions of the top six books outsold the print versions last week.

Now, believe me when I tell you that I know paper books will never be obsolete. For one thing I won’t be taking my Kindle

into the pool. I'm not stupid. Plus I like to drink a little while I'm floating around so sometimes gravity gets the best of me. Plus, although you can lend Kindle books to other Kindle owners, it's not quite the same as passing a paperback copy of Water For Elephants

around. On the other hand, I have no idea where my copy of Water For Elephants

is, which would be eliminated via Kindle lending, since they get loaned out for two weeks then come back to your account, as if by magic. And I don’t see a small herd of rainbow color unicorns thundering in my direction with little book bags around their soft and fluffy rainbow colored necks, returning my stack of Sara Gruen

Water for Elephants: A Novel

Anyway, all that was pretty much off the track I wanted to be on. But when I tell you the rest of it, it'll make more sense:

I got tired of waiting for someone else to publish my short story, so I published it myself. On Amazon. I know, I know: What kind of crazy ass would choose to ditch the middle man and publish their work on the biggest grossing sales site on the internet. Silly, I know. But what the hell…

The first copy I sold was to myself, because I wanted to make sure it was formatted correctly. Apparently, I goofed up the paragraph indentation, so you'll have to excuse that. Then again, if you're a frequent reader of this blog, you're used to poor spelling and typos anyway.

By the way, you do not have to own a Kindle to read it. There is a free app available for downlaod to PC's. iPhones/pods/pads and Android based phones and tablets. In other words, you don't need a Kindle to read Kindle books.

So, for your consideration, available for the low, low price of .99 cents, is my charming little short, Splitting The Difference. I hope you like it. And if you do, I'd appreciate it if you’d tell your friends.

This is kind of a test, but more about that later...
Posted by Lisa Deon at 3:04 PM No comments:

Once More, With Feeling

The Christmas Carriage season went well, with the exception of a couple of nights with a lot of snow. If people paying for a totally frivolous form of entertainment can be used as an economic indicator, then things are picking up.

It's a strange occupation I have; some nights I'm so bored, cold, sore or crabby it's all I can do to not growl at the people in my carriage. Other nights we have front row seats to "Weird Shit Window On The World."

For example: I was on a ride passing North Gate and I noticed two guys unloading one of the ugliest loveseats I've ever seen out of the back of a pickup. This caught my attention only because the North Gate of Temple Square is not a typical place to unload furniture. Then they unloaded what looked to be the base of a motorized scooter. Now, being that we travel at a whopping four miles per hour, we get to see a lot of stuff, and much of it, I don’t give a second thought to. This was one of those instances, until Carriage driver Kar later mentioned the motorized loveseat zipping down the road at warp speed. 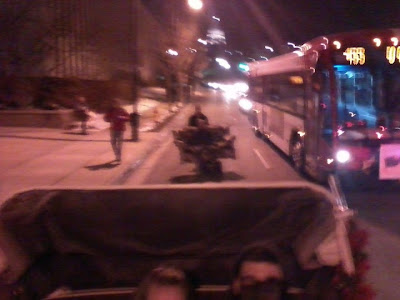 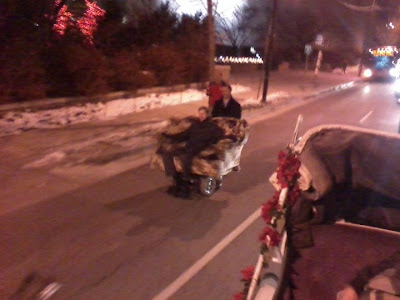 Ok, it was warp speed for a couch. They usually don’t go from 0-7 in two minutes. They usually go from 0 to 0. At least all the ones I've ever owned.

Then, of course, there was the Barking Dog From Hell experience. A bunch of us were stopped at the light on North Temple and Main street, with traffic stack up like pre-teens waiting for the doors to open at a general admission seating Justin Bieber concert. A little dog in a car two lanes over noticed the horses and started barking, barking, barking. The owners, as usual with annoying dogs that bark continuously, thought it was cute, so they rolled down their windows. enabling the rest of us captured in traffic to enjoy the festive sounds of Sir Barksalot.

The stoplight, by the way, for whatever reason, was not functioning properly, so we sat there for a while, and finally I yelled to the barking dog people, "Doesn’t he know any other songs?"

So I demonstrated for them by barking "Jingle Bells." Behind me, Crazy Shelley joined in. We sang one chorus, then we changed to a Salsa beat. Shelley sang the words this time, and I barked in appropriate places.

At long last the light changed. But not before we taught that dog a new song.
Posted by Lisa Deon at 2:35 PM 2 comments:

Labels: Christmas would be so much easier if they's take the whole "Holiday" thing out of it..., Workin' For The Man
Newer Posts Older Posts Home
Subscribe to: Posts (Atom)