The Birds, Without Bees

I love educating people. I'd be a teacher if it wasn't for the fact that I intensely dislike other people's children. But I've been known to spend long units of time blathering on about horses, food, the weather, Southern Utah's Red Rock country…well, you get the picture.

So it was no surprise that while taking some teenagers around Temple Square I stopped to show them a well known resident. Salt Lake City is home to a nesting pair of
Peregrine Falcons. In my family we do some casual bird watching so I'm familiar with numerous breeds. Plus being that I work outside pretty much next to the Joseph Smith Memorial Building, where the birds have a nesting box, I've seen them and their offspring swooping around downtown. On this particular evening I came around the corner from North Temple onto State Street and happened to notice one of the falcons perched on the top of the front corner of the apartment building across the street. Stopping the carriage opposite the building I pointed the bird out to the occupants and said,

"It's sitting up there, possibly waiting for an unsuspecting bird to fly by, then it will dive down and make a meal out of it."

Because in theory that's the type of behavior they should be doing.

As we're watching the Peregrine, another bird flies into the vicinity.

"Maybe it'll attack that bird," I tell them.

The second bird flaps over, and lands next to the Peregrine. Then we all watch as it hops on the first bird's back, has its way with it, then flies off.

As they say, timing is everything.

You can watch the nesting pair of falcons from the comfort of your computer. That works well for me, because I'm not a big fan of heights.

One More For The Road

Don't you just hate it when you run past a blog you follow and it's same old crap as was there the last time you visited?

The problem as I see it is this: I haven't really been driving carriage much lately, and with the exception of having my horse, Dreamer's, teeth floated a few weeks back, not much equine related has been going on.

And, contrary to public opinion, that is what the whole "Slave Driver" name is about.

We did get one more "Rental Cat" (also known as a Foster). His name is Opi and he's older, a male and foreign (Siamese). He's not as dog friendly as Zita was, but that whole Dog/Cat relationship bordered on very weird anyway. 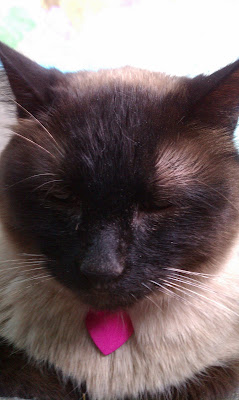 Opi will be the last foster for either a while, or ever. My mother is coming to live with us, so the whole cat operation is coming to an end. Which is okay with Mr. Slave Driver, because although he is not totally opposed to cats, he is not exactly enamored with the smell of their litter box.

I've been writing my newest work-in-progress; It's a romantic comedy called Another You. Here's the first part of the synopsis/elevator pitch:

Gun shy after two failed marriages, Sammie Fallon finally meets a man who's intelligent, handsome, loyal, energetic, hard working and attentive to her moods. She thinks he's great; her friends all like him, and if it wasn't for one tiny thing, he'd be perfect for her:

She suspects he might be the reincarnation of her dead dog.

Jack McCune was a player, always making time with the girls but never getting emotionally invested. When a tragic accident almost kills Jack, and takes the life of a girl he was dating, he realizes he didn’t even bother to learn her last name. Wracked with survivors guilt, and able to being a new lease on life, Jack vows to find the girl of his dreams and become a devoted, loving companion.

I've also been dinking around with my website. I bought my domain last year but haven't had a chance to find a host and put it online. So if you have a minute go over to LisaDeon.com and let me know what you think. It's still rough around the edges, but that's what DIY gets. And don't bother clicking on the "My Alter Ego" link. It'll just bring you right back here.

And if one more person buys a copy of my short, Splitting The Difference, I'll actually get paid. Not enough to buy that RV I covet, but I get a footlong from Subway.
Posted by Lisa Deon at 1:49 PM 2 comments: