Wrestling With Pigs and MIRL


The pig I am currently wrestling with is, of course, my novel.

Oh, not the content. That's done. I think I've even gotten most of the typos, punctuation errors, grammar boogers and formatting issues within the document fixed, because that's how good I am I have some fabulous friends willing to read my book yet another time and point out all the stuff I have messed up. The "pig" part is uploading it to Create Space and then having the automatic review wizard inform me that, once again, it won't fit within the margins established by the template. Even though I have diligently (and I rarely do anything with any sort of diligence; usually the most you can hope for from me is a half-assed attempt at making something look like I meticulously followed the directions when in fact I've really been watching cartoons in my head the entire time) followed the formatting directions and used the template so it would all fit within the accepted parameters.

Nope. Just not doing it.

Part of the problem might be due to me adding stuff. Not to the story: I've cut close to 5000 words since I began the self publishing journey back in February. No, I've decided to add the first chapter of the sequel to the end as a teaser. So that added another eleven or so pages, which apparently makes a big difference, according to the Create Space Wizard. And quite frankly I'm getting a little tired of this wizard being all bossy and shit. I'm not a Druid, enrolled  at Hogworts, or a member of the Klan. I should not have to take orders from some snarky, know-it-all Wizard.

Anyway, I'll work it out. Maybe. I can sometimes manage to beat stuff into submission.

The MIRL part of today's title has to do with a stalker fellow Blogger. Most of the folks who have been stopping by my blog for years don't interact with me (I'm looking at you, Cambridge, Massachusetts). Once in a while some of  you people even post comments. Occasionally you people even use a name other than "Anonymous". "Dreaming"  is one of those people, and a few weeks ago Dreaming and Mr. Dreaming visited Utah. I, being the tour guide that I am, left suggestions of stuff they could do while in town. One of the things they decided to do was take a carriage ride around Temple Square with me and Charlie horse. We had a great time, and it was fun to Meet In Real Life. The only other Confessions Blog reader I've met in person has been Mackenzie, and she ended up coming to work for us. I don't think Dreaming is going to give up her awesome home and move to Utah, but she's welcome to visit any time.

You should stop by her blog. She has a beautiful Aussie named Tucker she recently tortured by sending him to the groomer. I think he looks fabulous, but I know my dear departed Border collie, Cowboy, would have felt the same way if we ever did something as foofy as sending him to the groomer. Like formatting for Create Space, wrestling all that unruly hair into submission is not for the faint of heart.

I received my proofs today. Proofs, also known as ARCs (Advanced Reader Copies) exist for the sole purpose of finding errors. So I have five books which will be marked up by people whose only job is to find mistakes. Like going out of your way to point out when someone f*cks up. So, in other words, a perfect job for me; except I wrote the book, so I've read the book so often that I don't actually see the words anymore. I have them printed on my heart. Anyway, what this means is my novel is one.step.closer to publication. And while I have driven around downtown and Salt Lake City in a carriage so may times that I know the feel of the street to the point that I avoid pot holes by habit, I have never been down the publication road before. 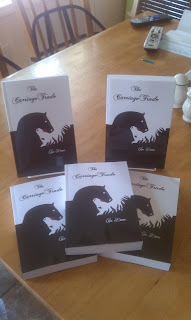 Hang on, dear reader. I'm predicting it will be an interesting ride.
Posted by Lisa Deon at 6:47 PM 3 comments:

We Interrupt Your Web Surfing To Bring You This Special Report... 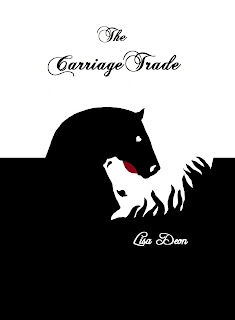 Have you missed me? I've been off, playing with both real and imaginary people. And I do have something to show for it... The Kid graduates in two weeks. Two weeks after that she leaves for Army basic training and then off to AIT (Advanced Individual Training), and then four days after that is the release date for my novel, The Carriage Trade.

How do you get to a "Happily Ever After" when you can't remember where it began?

Carlin "Carlos" Farley's life is an open book. Unfortunately, she can't remember most of it.   She's losing her barn manager, Bill, the guy who's been running her horse drawn carriage business while she's been in extended care recovering from  an accident. Bill has always been there for her, in fact they've grown up together, but now he wants to pursue the career he put on hold and Carlin's resigned to the idea that he's leaving her.


Bill Fantazma is the kind of guy who always tries to do the right thing. But sometimes doing the right thing is not the right thing to do. He's been in charge of Carlin's care and the business he helped acquire for her, and has accepted the accident and her subsequent brain damage as a chance for a "do-over", since his previous actions to attract her affection were less than honorable.


Richard Cooper appears the answer to their business problems. Knowledgeable about horses, willing to step in and take over the barn manager position, helpful and solicitous to Carlin, he's not put off by her sometimes bizarre and quirky behavior.
But when Richard sees an opportunity to move in and draw Carlin's affection, Bill realizes just what she means to him and must made a decision; come clean about their past and risk her anger, or step away and allow Richard to have a romantic relationship with the woman Bill has loved all of his life.


It's a romance she can't remember and he can never forget.

I've been to a lot of workshops and classes and stuff that's supposed to make me a gooder better writer. Brighter, faster, sleeker, etc. Whatever. I still use too many words, but you knew that anyway, right? I had an offer from a small publishing company, but after reviewing several things (the re-writes, for example, and running the numbers, plus they didn't want the sequel...)  I've decided to go it alone. Plus I always knew what I wanted my cover to look like. Being that I am a bit spoiled, do not play well with others, and like to always get my way, it's probably for the best. Plus, if I fail miserably, I will have no one to blame but myself. And I can cure that by adding a little extra alcohol into my daily regimen, and POOF! No more blame.

My personal "branding", as the big kids like to call it, runs several directions. First, everything I write naturally has horses in it. That's just who I am. Second, my covers will be stark black and while with just a dash of color. Why? Because I designed them and I'm not all that good of an artist. Plus if people like the theme enough, I can offer the design on products for purchase. An example is the coffee cup I had made through Wal-Mart: 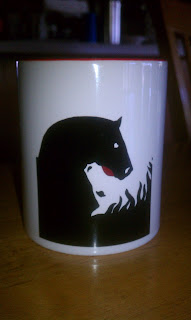 I love my coffee cup.

Anyway, The Carriage Trade is in the final preparations for  release, and I'm shooting for June 15. It will be available as a trade paperback (Kindle Select)  and eBook. After the first 90 days it will be available on all other eBook platforms via Smashwords. I will of course add the links and if anyone wants to do a blog interview I will be happy to oblige.

Visit my website, feel free to friend me on  https://www.facebook.com/LisaDeon  and I am also on Twitter under the same name.

Updates to follow as necessary. I now return you to your regularly scheduled internet surfing...
Posted by Lisa Deon at 9:57 AM No comments: