The Christmas craziness is almost over for me. Two more nights of work and then I can get back to finishing The Re-education of the One Trick Pony. In between gearing up for the Sundance Film Festival, that is. So for now, I've included the following link to a radio panel I participated in about  romance. Have a listen over at:
http://ontherightsideradio.com/happy-new-year2/o
Posted by Lisa Deon at 12:09 PM No comments:

How To Build A Better Mousetrap


Well, not really. As a carriage driver, I rarely need a mousetrap on my carriage. Inside the barn, however, is a whole 'nother story.

Wease and I watched a You Tube video of a driver in NYC who was being illegally detained by some random RARA a-hole. I yelled at my computer monitor with such vehemence that I thought I was going to work myself into a major stroke. So at one point, I shut it off so save me months in a vegetative state and eventual plug pulling.

But I digress... The thing that caught my attention on the video was the way the driver was cradling an umbrella in the crook of her elbow while driving. This is a tricky and cumbersome practice. But it gave me an idea. 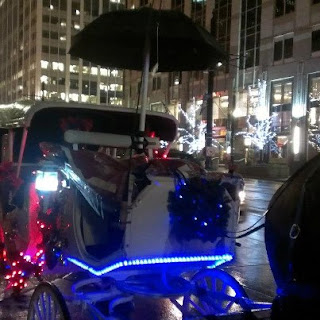 So I posted photos of my super-fantastic bumbershoot apparatus on Facebook and was immediately asked by another driver how I rigged it up. So, here is a pictorial do-it-yourself: 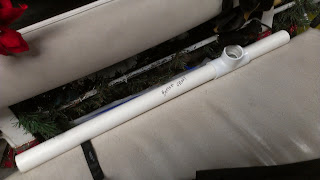 1 1/4 inch PVC and a "T" of the same size. You'll need a
piece long enough to use for bottom brace and an upright. 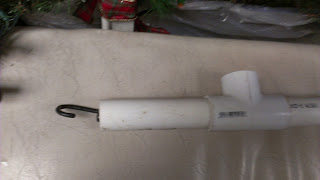 Two regular size bungee cords, one a little longer than the other; thread one through
the PVC, use the second one to attach around the seat rest upright supports of the carriage. 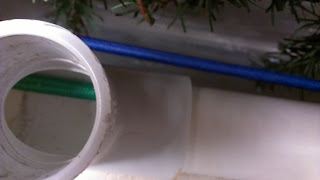 If your carriage is not equipped as so, I'm sure you can improvise something... 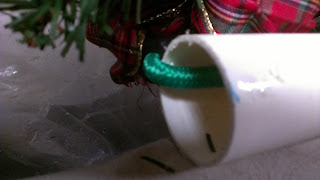 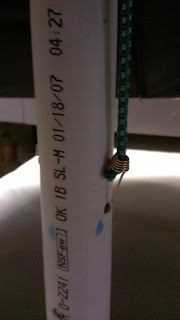 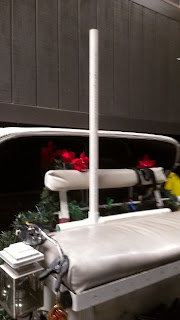 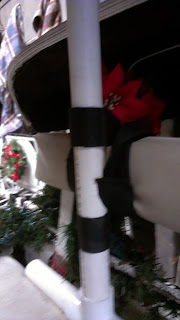 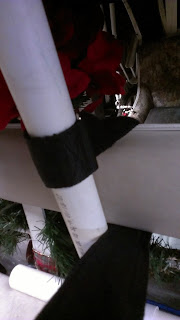 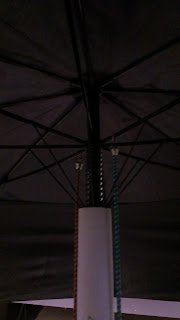 So, shove your straight handled (obviously a "J" style won't work) umbrella down into the PVC upright. Use four small bungee cords to secure the umbrella to the PVC~ I drilled four holes into the upright and hooked it in that way. Sit on the box and adjust the upright length to suit you. I'm short: I wanted enough head room that I would be protected yet be able to see the traffic lights. I also used two velcro straps (because I had them already) to secure the upright to the seat back. Wease used a bungee in an "X" formation. Wease and I toyed with the idea of adding a 45 degree angle that could be rotated to deflect the wind depending on the direction it is blowing, or your direction of travel. But I think that gets too complicated.

So have fun making this and stay dry out there.
If you want to thank me, you can buy a copy of my book.