A blog doesn’t write itself, but there are times I wish it would. This is one of them.

Several weeks ago, we lost a driver. His name was Don, and he'd been with us for a couple of years. He was brought into our employment by his wife, Audrey, who also drives. Previously the employees we'd had named "Don" had all been as dumb as a box of rocks. So much so that at one point we imposed a moratorium on hiring men named "Don", just because the quality of Dons we'd experienced had been so incredibly subpar.

This Don was the exception to that rule.

Don was a quiet man, quick with a funny quip, there to assist if you needed help, and always willing to pitch in where needed. He had a gentle hand with the horses, and took exceptional care with his favorite co-worker, Libby. We were shocked by his unexpected passing of a heart attack, and his absence has left a hole in our small tribe.

And we not only lost Don, but Audrey has decided to be taken off the schedule for the time being. We're patient people; we know she’ll be back when she feels the time is right. And we'll welcome her with open arms when she returns.

Every once in a while I find myself saying, "Damn it, Don."

But I'll tell you where he was; He was with us when we toasted him Friday night at Dees for breakfast. He was there when we discussed how he took care of our carriage batteries. He was there when we talked about the person who would be driving Libby, wanting to make sure she was paired with a co-worker that would love her like he did. He was at South Gate with us last night when we talked about his funeral service, the moving music that reduced the most stoic of our clan to tears, and his gravesite up next to the fence in the cemetery with a great view. And he's there every time we look at the sign-up calendar for December: He was looking forward to the Christmas carriage driving season, and his signature is on every single day from November 26 to December 31. Ro couldn’t bring herself to scratch it out, so when they make up the schedule, they just work around it. And it's appropriate, because he's still with us in spirit, hanging around the carriage barn, just like he did every week from Tuesday through Saturday. And his headstone sits in the office, custom designed by the last trainee he had, waiting for spring to be set on his grave. By the time they set it, it will have acquired that special "horsey" smell we all love.

The day after Don's funeral, I ran into one of his step daughters; She thanked me again for everything the carriage company had done. For the horse drawn hearse that took Don from the church to the cemetery. For the drivers that showed up in our finest carriage driving attire. For our support in this trying time.

I replied that we hadn't done anything special. Don was part of our family too.

And damn it, we miss him. 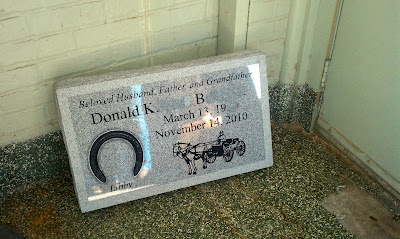 These Boots Are Make For Walkin' (In Snow) 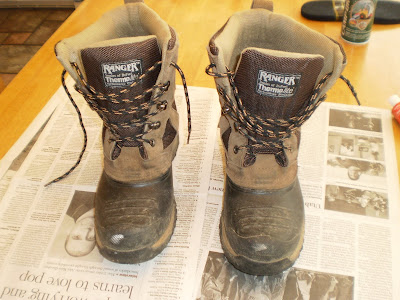 One of the most important pieces of equipment I have for winter carriage driving are my boots. Working in winter without the proper footwear is, simply put, insane. Because, for me, if I'm warm and dry I can go for hours; If not, I'm screwed. The winter weather in Utah comes in varying degrees of moderately cool, cold, and cold & wet. Cool and cold don’t need much preparation for me. My winter boots are not the stylish type one could pick up at a regular shoe store. Mine are the heavy duty kind you buy at places like Sportsman's Warehouse or Cabela's. In other words, boots heavy enough to use as a weapon.

Not all boots are carriage driving ready. Unlike some winter activities that allow the participant to walk, thus helping circulate blood flow, we do a lot of either sitting or standing around, sometimes in several inches of snow. I have two metal screws in each of my feet due to bunion surgery several years ago, so cold transference happens at a faster rate for my feet then to other, non-metal infused folk. So I take my footwear seriously.

It helps to start with a good brand of boots. I've used Coleman, Sorel and Ranger. The Sorel boots were warm but because I used a charcoal foot warmer, the sole melted, so I do not find them durable. I like the Ranger boots the best because they have removable liners that can be dried separate from the main part of the boot, thus expediting the process. Plus I have yet to melt the bottoms. However, even though the Ranger boots as labeled "Water Proof", they are not, in my experience, 100% waterproof. They are more like "Water resistant." And in my field water resistant doesn't cut it.

First I check my boots for any damage. If I have any separation issues, cuts, or melted spots I use Shoe Goo. 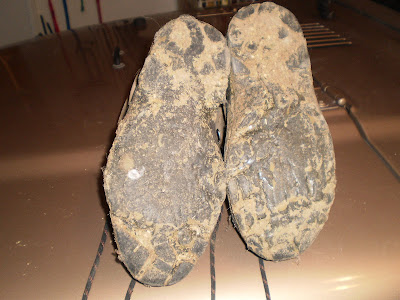 I "repaired" the soles of the melted Sorel boots with Shoe Goo, but I don’t wear them for work because the Shoe Goo soles don’t work as well as an insulator as the original rubber plus there is no longer any tread on them and that makes them slippery to walk in. I keep them at home and wear them when shoveling the driveway. 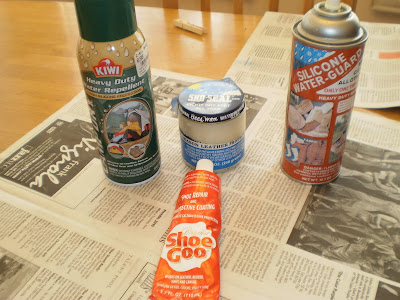 Next, I remove the liners and laces because they just get in the way. Then I brush off any dirt/shavings/manure still clinging from the last time I wore them. 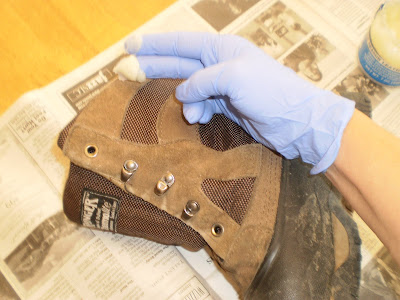 Then to the suede/leather I apply a product called "Sno-Seal." It is a beeswax based water proofing ointment-like substance that comes in a jar. It works best if the boots are warm because it helps melt the product deep into the leather/suede. 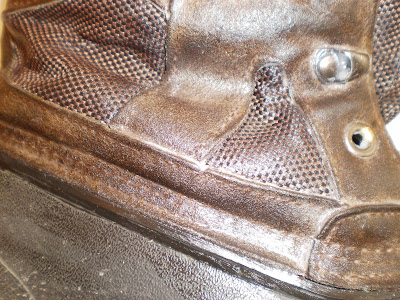 After I apply the Sno-Seal, I let the boots dry for a while, then I apply Kiwi Camp Dry to any fabric areas of the boot. 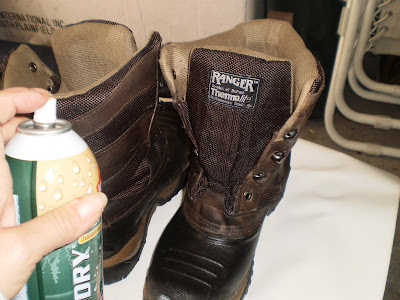 It is a silicone spray water proofing agent. I usually apply two coats, just to be sure. Then I let then whole thing cure for a day or two and test it under running water.

Finally, I have a warm water-proof pair of boots I can use five nights a week night for the six weeks of Christmas carriage driving, so my feet stay warm and dry.
Posted by Lisa Deon at 11:03 AM 1 comment:

Labels: Christmas would be so much easier if they's take the whole "Holiday" thing out of it..., Workin' For The Man

I have all this irrelevant stuff I'm doing over here;

Cleaning my house (both my mother and my brother are coming to visit. The level of chaos and clutter shame me. We're used to it, others, not so much. So I clean)

One of the things I've been contemplating is getting rid of some stuff. Not junk, mind you. And not crap I want to donate to the D.I. or Salvation Army. I'm talking good stuff that I just don’t do anything with any more. Stuff that I love, or that I use, just not so much. Could I live without it? Yeah. I just drag my feet about the actual getting rid of part. I used to sell a lot of stuff on ebay, but now I'm too lazy to deal with the mailing of it so I put stuff on KSL.com to sell locally then I don't have to mess with the shipping.

For example, in my garage I have a thing called a Hit-Away. I'm thinking of selling it. It's basically a softball on a string attached to a pole. You whack it and it winds around a pole, then as it unwinds you whack it again. It's for people to practice their batting skills with. Hand/eye coordination. But I’ll tell you what it's really good for: bashing the shit out of something without getting arrested. That's right. Have a fight with your kid? Don't pull a "Facebook Mom" stunt and shake them to death. Go out to your Hit-Away and crack the crap outta that softball with that Louisville Slugger until you feel all that pent up rage Melt-Away.

You know, maybe I'll wait a bit on selling the Hit-Away. At least until after Christmas. Or maybe when The Kid goes away to college.

Anyway, one of the things I'm contemplating selling is the best gift ever. It's one I gave mind you, not one that I got. But I love it just the same. And I would have killed to have this when I was a child. We had to use carboard boxes to make our "stables". 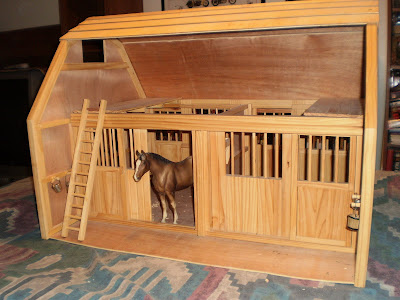 Available for immediate occupancy; spacious two stall barn on acreage only limited by your imagination. Comes complete with hay storage up top, wall to wall shavings, and sliding doors front and back. Exterior features full fencing, jump standards, and cavaletti. Also included are appliances such as grass cutters and hedge trimmers. Methane gas heat. Border Collie security comes standard. Owner willing to include some amenities such as bagged corn and oats, and tack trunk. Don’t miss out on a fantastic starter barn. 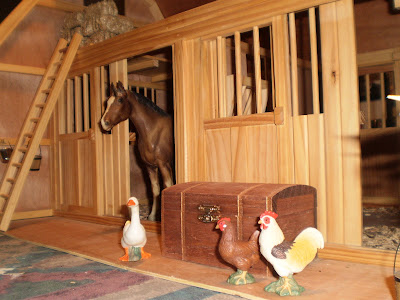 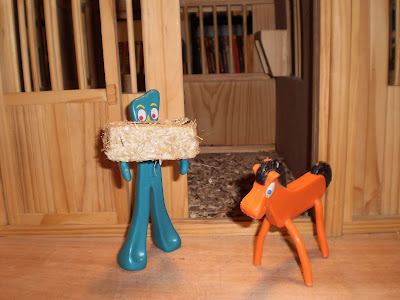 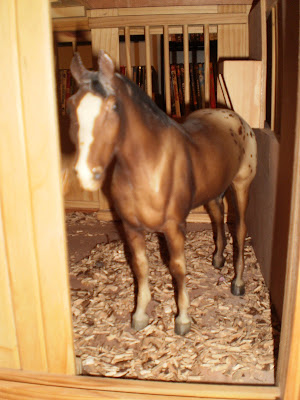 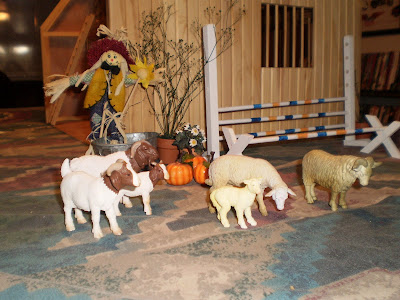 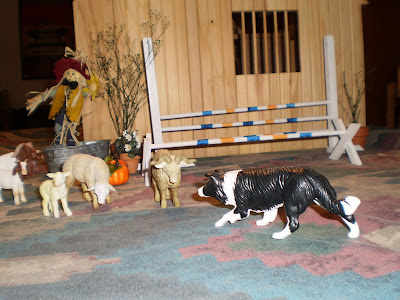 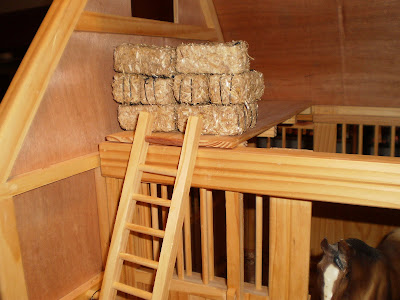 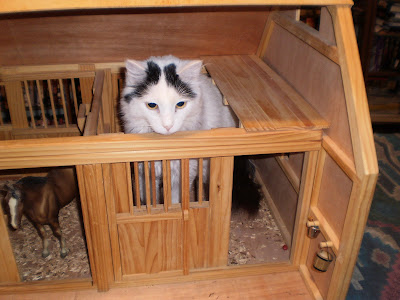 (No, I did not put Wednesday the cat in the barn. I was taking the photos and she climbed in it herself. Distracting in a Catzilla kind of way? Yes, but it does give an idea as to the scale.

And trust me, if I had the time, and someone else willing to play "Breyer Horses" with me, I probably wouldn't get rid of this either.
Posted by Lisa Deon at 12:50 PM 6 comments: