I know I haven't written much carriage driving stuff lately, but that's because (just in case you haven't figure it out yet...) I published my book. However, I still drive. In fact, currently I work four days a week. So here's a little taste of what's been happening: 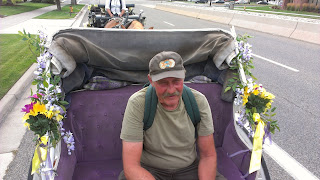 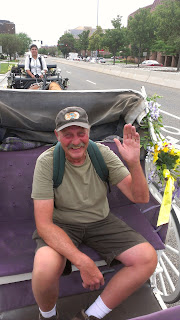 The Peregrine Falcons returned again and hatched out three babies. One of them (Macy) died after colliding with a building, but the other two survived. Boxer (Boxer Sue originally, but now there is a question about the gender, so just "Boxer" for  now)  is happily soaring around Salt Lake City, munching on other birds, occasionally squawking for its parents. Primo, the other surviving fledgling, suffered some injuries after his own bird vs building incident. He has been turned over to a raptor rehabilitator for therapy. Thus, the small but always interesting group of volunteer falcon watchers once again have, like the falcon family, gone their separate ways. Last week on my way out to South Gate I noticed the volunteer's faithful leader, Bob, walking down North Temple. I told him to get in the carriage, and I gave him a ride for three blocks, dropping him 200 yards from Falcon Central. Bob looked tired, because during Fledge Month, he gets little to no sleep. So It was my pleasure to give him a slight respite from the usual harried running around he does. Later Bob informed that that he was able to strike "take a carriage ride" off of his bucket list. Although I don't think it counts, because it was more like a taxi ride than a carriage ride. 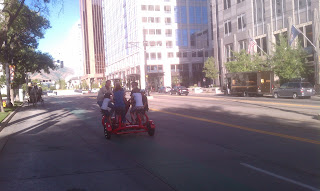 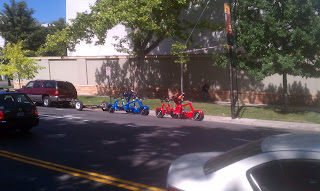 We have some competition now downtown. Well, sort of. At first glance it looks like some weird but colorful torture exercise machine designed by a maniacal Richard Simmons. In reality it's a 6 passenger bike. I looked at their website, which has broken links and little information,  and although their YouTube video has a packed bike with furiously pedaling passengers all wearing bike helmets and smiling like lobotomy recipients, in reality that almost never happens. Oh, yeah, the furious pedaling happens, just not the helmets. And I have to wonder if they have a business license and insurance. Especially insurance. Because, with the exception of a string of green Christmas lights, it's pretty bare bones when it comes to visibility. 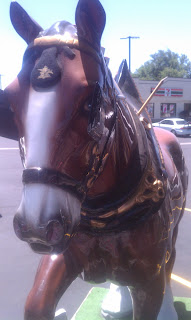 People always ask 1) if the horse is real or 2) if it's a Clydesdale. For this photo, the answer to one of these questions is yes. 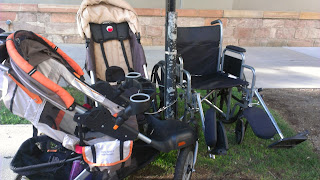 And finally, we've started using bike locks to secure things like our water buckets and customer's strollers. Occasionally it looks like an eclectic parking lot. And, even thought nothing has ever been taken from our hack line, we now have 100% zero items stolen. I know; although that makes no sense what so ever and is kind of redundant, it's reassuring in a  false sense of security way that you didn't know you needed before sort of way. 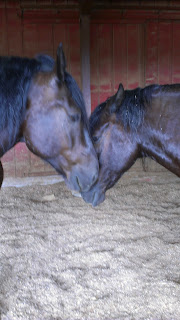