I spent last weekend at a mansion with a bunch of romance writers. My roomie and I had nice digs. A beautiful queen size bed, bathroom with a claw footed tub, although our loft was infested with three other writers... but that wasn't problematic in the least. They climbed up the ladder to their attic enclosure and didn't toss miscellaneous flotsam onto us while we were sleeping so everything was good. I had just brought up my second load of junk (I do not travel light. Go camping with me... If you forget something, it's not a problem; I've brought along two) and dropped it in the corner when I spied a wooden object behind the headboard.

The designed of this house is a little odd... lots of weird angles and cubbyholes causes furniture to sit in the middle of a room instead of against a wall. At first glance I was delighted by my discovery; that is, until I got a closer look. What should have been an awesome find for a person as addicted to horses as I am, ended up giving us the heebie-jeebies.

You see, I'd found Deviltariat. He was an enormous demon horse, carved from the sick psyche of someone who obviously has never been enamoured with horses of any kind. His wooden eyes glowed with malice, and his open mouth was poised to bite. And, he was the size of a pony.

"Why, oh why?" I cried, falling to my knees in front of the horse from hell, begging him not to kill me in my sleep. Okay, I didn't really do that. But what I did do was to throw a towel over his head to block out his evil thoughts. Then I made a tinfoil hat to wear while sleeping, so his aberrant telepathic images wouldn't invade my already over-imaginative writer's mind.

But that's just me. You might have slept like a baby. You know, with THIS only inches behind your head~ 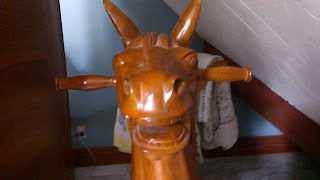 The rest of the house was no less, err, interesting when it came to the choice of decor. There is a huge presence of carved stuff. I found it particularly disturbing to have Angels looking as my butt when I was seated on the toilet.

However, I will admit that the view of the canyon, deer and wild turkey outside made up for the oddities inside. Even considering I was surrounded by writers, and we are infamous for coming up with weird stuff like this. 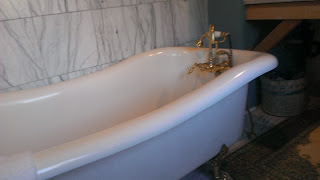 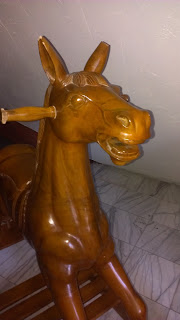 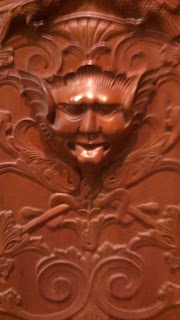 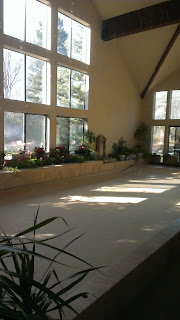 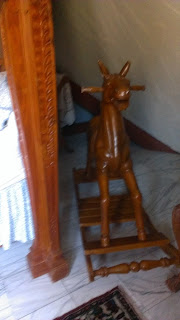 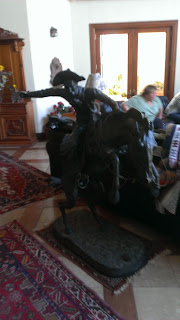 A non-creepy yet huge Remington cast 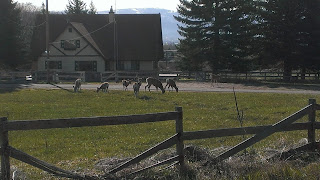 Anyway, my next blog will be about my new book, The Re-Education of the One Trick Pony. There will be contests, prizes, cake, and of course wine. You can win the prizes. The cake and wine are mine.

Those first couple of lines of your post cracked me up. All those romance writers crammed into a bedroom...

Yeah, you know, I sprayed and sprayed but I just couldn't get rid of them...