Why Some Drivers Hate Me... (Okay, to be honest, providing music on my carriage is only one of the reasons...)

Attention K-Mart shoppers, I’d like to draw your attention to the blue light, located in the center aisle of our store. Here you will find 15 carriages lined up and waiting to take you on your traditional Christmas Lights tour. If Scooter, Marky-Mark, Mr.& Mrs. Carriage Clause, and Slave Driver are working, your choices are as follows:

A black carriage or a white carriage (all the other drivers)

A heated carriage (Scooter, and trust me, you really do not want to know how he rigs it up.)

Now, when we have a stager, a person who stands at the front of the line and puts you in a carriage, you get Hobson’s choice; meaning, when you get to the front of the line (and believe me, if it’s a Saturday night, there will be a line) you get the carriage at the front. You don’t get to pick and choose, unless you want to stand around and wait for the carriage/driver of your choice to come back up to the front again.

Some people do, especially if they are friends or family of the driver.

But if it’s a weeknight, or it’s slow and we are selling our own rides, you get to pick. And you know what? A lot of people pick me, and Marky-Mark, Mr. & Mrs. C, and Scooter. Right out of the middle of the pack. Why? Because we’re all the same price. And if you paid the same price for a seat in economy as you did for a seat in first class, where would you choose to sit?

Now, I guarantee you, I will never go the Mr. and Mrs. Clause route. What’s that? Why would I pass up the chance to have a carriage packed with screaming children, smelling of overripe bananas, messy diapers and fruit loops, clamoring for my attention so they can tell me that they’ve been good all year and what kind of gift they want? Oh, I don’t know…

Besides, children are notoriously bad tippers, as are people with lots of children. Why? Because they’re broke, because they have so many children. And they all want Xboxes and Tickle Me Dancing Elmo for Christmas.

Okay, where the hell was I?

So, I will now show you one of they ways I pimp my ride so I can pull one out of the middle.

This is Carriage Sound System 101. Over the years I have perfected my design. In the beginning I used a CD Boom box. Let me tell you, not so good. Carriages are not the smoothest vehicle around, and every time I’d go over the light rail tracks it would skip. The I had some speakers that ran on batteries and I hooked up an iPod to it, but the wires frayed over the years and substitute speakers I found were not as loud. So now I use speakers from an old computer system. Anyway, here is a step by step of how you, too, can have a carriage sound system:

First we start with a lawnmower battery. This one is brand spankin new. They tend to only last a year or so because it gets charged every night. 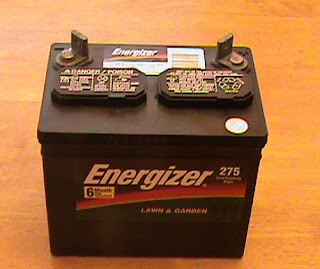 Then I customize mine. How? I paint the positive side red. Why? So I don’t screw up my inverter by connecting it incorrectly, not that I would ever do something as stupid as that... 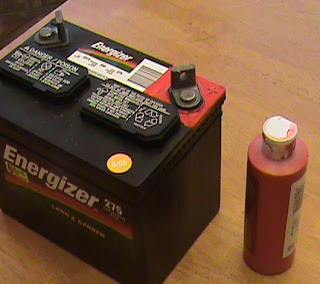 (Slave Driver scuffs her toe in the dirt and whistles.)


Hey, sometimes it's dark out and I don't see real good, okay?

Then I add a handy dandy carry handle because juggling a battery when you have a lot of crap to carry out to your carriage is tricky. So, 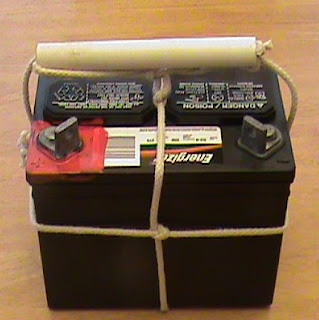 You hook a 100 watt inverter up to the battery using a battery clip power adapter. 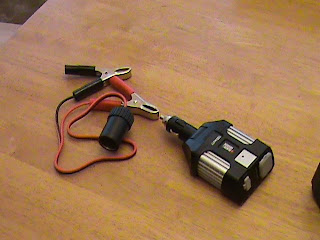 Then we add the speakers and an iPod. 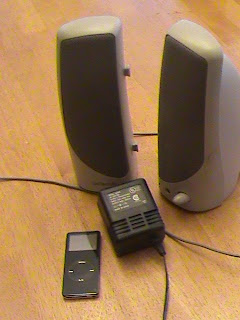 I have both a Nano and a Shuffle, I prefer the shuffle because the battery lasts longer and I only play Christmas music. I put it on "shuffle" setting because I've found that I memorize the playlist and cringe when things come on I'm sick of. This kills the anticipatory cringing factor. And in the end it doesn't matter. I'm sick of all of it and really want to hear some AC/DC. 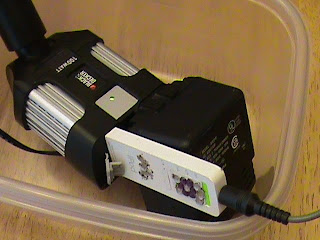 Then I shove the whole shebang into some cheap Gladware for

waterproofing (It doesn't have to be enclosed real well, it sits under my seat and mostly stays dry. But I have killed an inverter by getting it wet, so...) Turn on the speakers and let the festive music of the joyous hoilday season drown out the clammoring for my attention coming from behind me...


Edited to add:
It wasn't until later that I put everything into a grocery bag, and noticed that it looked suspiciously like... 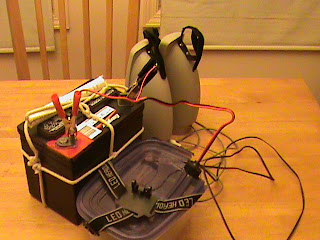 However Mr. Slave Driver strongly suggested that I do not attempt to go anywhere near the airport with it.
Posted by Lisa Deon at 2:04 PM

To make you feel any better Mr. and Mrs. C will be no shows this year. Although we will actually be driving, the friendlier half has REFUSED to let me dye his beard and hair this year. It just hurts to much for the few days that we will be driving. We will have music, the foot warmers, etc., but the outfits will stay in the box and the beard will stay brownish (the crankier half and becoming a father at 41 has made the once very dark hair a bit white). At least this is the theory. He has tried this before, but the kids have broken him down in the past. They love having their own personal Santa.

I admire that you can shuffle your Christmas music. I have to have a set list. I gauge my time by what song is playing when I reach a specific point. I know that if I get to Rudolph and I have not yet hit West Temple, I am in trouble with time. I know that I should be turning left onto North Temple when I hear Let it Snow. If O Little town of Bethlehem is playing(to the music to The house of the rising sun) and I am at the light at Main, I am right on time. I know that if there are cars backed up from South Temple on State and I am already hearing Garth Brooks, I am in big trouble and I need to become creative in my driving. I finish off with a medley from Trans-Siberian Orchestra that goes slightly over the time so that I have music playing, but no singing as I get the money, manuever into the landing strip and attempt to act cheerful enough for a tip.

You know, you've got the ensembles...why not shave the beard and go with falsies? It's not like they'll be sitting on his knee while he's driving...

I gauge my time by what song is playing when I reach a specific point.

Wow. It might be a novel concept but I use a newfangled thingy called a watch...all the cool kids are doin it. You should try it...yessss my precious, come over to the dark side...use a watch...

And no one with the NSA has brought you quietly into custody and unceremoniously searched all your body cavities for evidence of antisocial behavior? Hmm...you're lucky.

I think my blog is currently running under the NSA radar, and even if it wasn't, we drivers have a reputation for...not playing well with others, so to speak. So, yeah, they'd be afraid to touch me.

Hey. I can never find my watch under all of the layers. I sometimes have one that I clip to the dash, but by the time that my brain is frozen and I have been trying to convince Belle to not spit on the people in the carriage in front or trot to catch the carriage that is two blocks away, I want simple, so simple... a caveman could do it! (or a frostbitten carriage driver)
Besides, I like listening to the music, then I don't have to talk. I always lose my voice and cough my lungs out anyway, but I still get the group that wants me to talk the entire time, even when I sound like death.