Getting Rid of Stan

Yesterday my vet, Buzz, came out and we started our “Evict Stan from Dreamer’s Legpit” plan. For those of you new to my blog, Dreamer is my horse, and Stan is the sarcoid that has developed in his front “legpit.” Stan recently had a growth spurt and we decided to take some aggressive action. First step was the biopsy. Buzz gave me a copy of the pathology report which I will not post because I’d have to re-type it and anyone who actually knows me knows that my typing is sub-par. And I’m lazy. Plus there are a lot of really big words in it. So if you wanna see it send a self addressed stamped envelope and I’ll send you a copy. Oh, and yeah, include $10 to help offset the medical costs.

Anyway, Here is a picture of Stan I took before Buzz got there to freeze him. 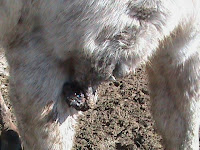 Dreamer was a very unhappy pony because I wrestled him away from his girlfriend Missy. Normally, Dreamer and Missy have their own cozy little run off to the side of the riding arena, but it’s been so muddy lately that the stable manager put some livestock panels up in the gelding pen and Dreamer, Missy and an ABH* mare have been hanging out there instead. It took me ten minutes to find him. I’m a bad owner.

A note about Dreamer: He’s a gelding. He’s been a gelding for 17 years. But right before he was gelded, his previous owners used him for stud. When I had the farm in Missouri, our herd included Dreamer and 3 mares: Nitemare, Poco Loco, and the pony Gypsy Heart.

Nitemare and her daughter Poco Loco

Is Gypsy not the cutest pony you have ever laid eyes on? Hackney Pony, a rescue from the Miami County KS debacle. 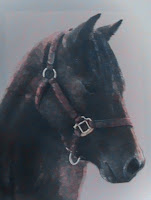 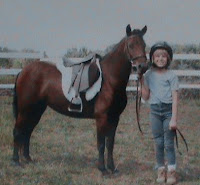 So Dreamer still thinks he’s a stud. He gets along way better with mares than he ever did with geldings, and when you take his girls away from him, or visa versa, he has a fit. So, here is a picture of Dreamer calling to Missy, making sure she still loves him even though he’s been away from her for all of ten minutes. 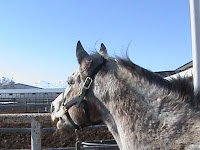 And here is the object of his affection, Missy, who really couldn’t care less. 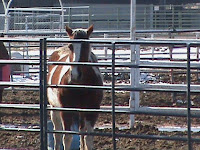 Dreamer got really mad when another gelding took the opportunity of his absence to make a little fence time with Missy. There is a large hole by where Dreamer was tied he dug out of frustration.

Anyway, back to Stan. Buzz showed up and gave Dreamer a mild sedative, then we spent the better part of an hour freezing and re-freezing the sarcoids with liquid nitrogen. Buzz also wants to try some formaldehyde as a topical because according to what he’s heard and seen sarcoids become resistant to whatever treatment you use, so we’re gonna change it up a bit, just to keep Stan on his toes. Or whatever.

Stan after his first treatment: No change 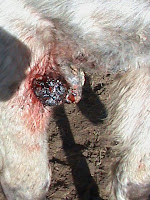 So treatment #1 went okay and we probably won’t see any change for a few days. But we’re going to be diligent about getting ride of Stan. Why? Cuz he’s ugly.

*ABH= Average Brown Horse. I don’t know the other mare’s name. Which I think is appropriate since Missy is Dreamer’s girlfriend and the ABH is just a side-job.
Posted by Lisa Deon at 9:41 AM

I think that you are being unfair to Stan. He may be ugly, but he may have feelings:)

Where does your vet get formaldehyde? I want some. I have been trying to order some to restock my bottles of creatures and everybody says that they don't sell it anymore.
Formalternate just doesn't work the same.

He may be ugly, but he may have feelings

Luckily, Stand does not, in fact, have feelings, but he does have blood vessels. :) So, while getting rid of him wont be painful, it will messy.

Where does your vet get formaldehyde?

I dont know, Formaldehyde-R-Us? I bought my kid an outfit in Nogales once and it reeked of formaldehyde, so maybe Mexico?

And why you like Stan so much? You wanna piece of him too?

OOO, that would be cool!!! I could put him in a jar as an exhibit. My students would be excited that I have a specimen that is not named George. I'll have to post some pics of my George collection.

Polor -- The color of polar bears

Stan looks like one mean sob! Good luck on evicting him!
Aww, what a cute pic of Dreamer calling to his gf!

Get thee far far away Stan! I hope for all the best for Dreamer. LOL at Dreamer and his harem and Missy. :)