The TV That Ate The Livingroom

There's been a bit of a kerfluffle going around in Casa Del Slave Driver the past couple of weeks. Mr. Slave Driver got a line on a big screen TV from a friend of a guy that he works with. For. Sale. Cheap. It only needed minor repair. Every man's dream, a high Def Jumbo-Tron in the basement/man cave for very small change.

I wasn't overly thrilled- although I admit that the television in the basement has been acting up over the last couple of years. We call it the "Mystery" TV. The mystery part being if once you hit the power button will it go on or not. Mostly you hit the power and it will turn on, eventually, many times scaring the bejesus out of you when, an hour after you hit the button and gave up on it and moved on to reading a book, it springs to life flaunting Oprah (shudder) or Regis (double shudder.)

Anyway, so I suppose we could use a television that responds the way an electronic device is designed to- on demand. I said, "Merry Christmas. That's your gift, I guess." And left it at that, getting occasional updates as to how the Jumbo-tron was doing at the TV infirmary. Yesterday it was ready. Fixed up, healthy, and ready to be transported home. Mr. SD got a buddy (the same buddy that incited the saga in the first place) to assist in the retrieval of the Jumbo-Tron and they delivered it while I was at work.

It won't fit in the basement. In fact, it won't make it around the first corner in the living room to the basement. 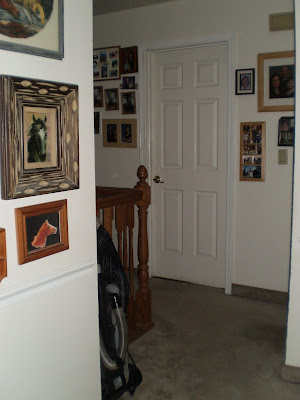 So I guess it'll be going in the living room. Where it will take up the space that used to be occupied by a TV and an entertainment center complete with shelves full of horses, photographs and nicknacks.

Folks, I have to tell you, I've owned automobiles smaller that this TVzilla. It comes up to my nose. (Okay, I admit that I'm not tall but holy crap!) 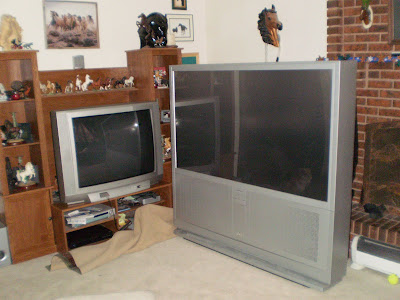 Well, at least I'll never worry about it getting stolen.

It makes the 32 inch TV look like a toy, doesn't it? Maybe in the summer we can park the car on the front lawn and watch it through the front window- pretend we're at the drive-in.
Posted by Lisa Deon at 9:03 AM

I am laughing my ass off!! Tell Mr. Slave Driver nice find!!!

Hahaha... so, woould you and Mr. Rebellious like to come by some evening and play poker? Yeah, that's it, Poker, no heavy lifting, uh huh..

Mr BPA would love to have one of those in the front room. We don't have a basement. We don't even have a tv in the bedroom. There is no room. Kid #3 got a drum set and the only space for it was our bedroom. (All Mr. BPA's idea, Thanks, dear!)

Oh, well, at least it's good and ugly. Although, with all that real estate underneath the display, maybe you could get an artist to come and paint Cletus and a carriage across the bottom. Kind of N.C. Wyeth?

FORSE: A powerful equine, as in "May the forse be with you when you plow the south gate."