I've had celebrities in my carriage before. Several years ago I took Adam Baldwin and his son for a ride. He was in town making a movie titled "Little Fish, Strange Pond," which I have yet to see. So it was no surprise when two people escorted Zach Efron up South Temple Street. Of course the fact that one of the two was carrying him seemed a little odd, but hey, I don’t judge.

Okay, actually, I do. Once I mentioned to Ro that we carriage drivers are not judgmental. She replied, "Hell yes we are." The I revised my statement, and explained that, yes, while she was correct that we are judgmental, because we have such low standards, we don't judge people on the same scale as others. So while people who are not involved in the carriage trade might consider someone "Strange", "Odd" or "Low Class", to us they're normal. Some even rank as "Superior."

In other words, we judge on a curve.

Anyway, back to my story. So these two people were walking up South Temple carrying Zach Efron, and as they passed I said, "Alright, Zach must go for a carriage ride." And they not only agreed, but they were delighted. So here are my photos of Zach Efron with my carriage. 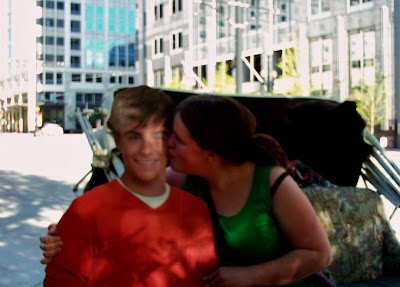 Zach get a kiss from one of his escorts 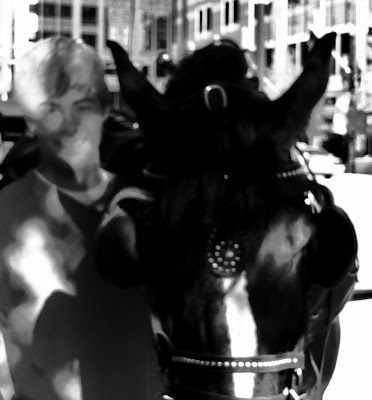 Zach bonds with Charlie Horse
And the fact that when I say "Zach Efron" what I mean is a card board cut out of Zach Efron, is totally superfluous. It still counts. Like I said, we judge on a curve. Living, breathing Zach vs. paper Zach, it's still a win.

My person favorite celebrity ride was when a rookie had the Jazz center, Greg Ostertag in her carriage and had no clue who he was. Its hard to miss that a 7 foot guy that thinks that a Jazz jersey would look good on the Angel Moroni on the Temple, just might be a Jazz player.

You lead an interesting life.

See, BPA, it just goes to show that it all depends on what you know...Greg Ostertag could have walked up and bit me on the ass and I would have had no clue that he was a celebrity. I would have just pegged him as an ass biter.

Occasionally, but most of the time it's pretty meh. I get excited at Double Coupon day at the grocery store.

LOL SD this reminds me of one trash collector from O-Town. He drove around with a cardboard cut out of *The Rock* in his truck...lol People would slow down to look closer, was a riot...

hello.. where I can find you on Facebook???
Simonetta.. from Italy