Most of the time when I'm working absolutely nothing happens. No.thing. It gets so dull out there on the street I'm forced to watch the cartoons on my head to keep my brain occupied. Other times, one thing might happen that's memorable. Then it makes the evening a little more interesting, and you can chat about that one thing for the rest of the night until you've beaten it to death.

Then there are the nights like this past Saturday, where so much stuff happens you would think we're a magnet for crazy shit. I had a trainee, and the first time I whipped out my camera she seemed a little surprised. Later on, after the last set of pictures I took, she said, "I can understand why it could be beneficial to carry a camera with you."

And of course that goes double for me because I take the pictures and then come home and blog about it, for you.

First I had a wedding up in the Grove. Wedding are not unusual; we take the bride to the wedding or take the bride and groom from the ceremony to the reception. Most common is taking the bride and groom from the reception to their hotel. Once we had a couple get married on the carriage (there is a local minister who will marry you wherever you want. Don't think the idea hasn't crossed my mind about getting ordained on the internet and offering to be both the driver and the minister… I'm all about value.) And occasionally I've done a combo ride, like the one this weekend. I took the bride, her dad and the flower girls from Memorial House down the road to where the ceremony occured, then I took the bride and her new husband on a ride for about 20 minutes and dropped them off back at Memorial House for the reception. 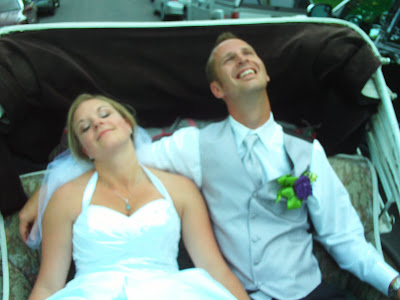 The unusual part about his wedding was, besides their wedding, another wedding party came up to the Grove for photos. It was an African wedding and I have never seen so many tall skinny people in my life. The women were all around 6ft tall, and on top of that they wore high heels. The men who accompanied each woman was at least as tall as the female and that was without him wearing heels. So, first unusual thing: African Wedding. 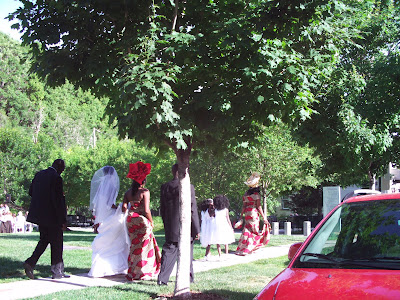 Then, while standing around waiting for my bride to get ready (actually she was ready but the delivery of the rest of the chairs for her guests was late so I'm sure she was tweaking) a beautifully dressed couple walked past us. I asked if I could take their photo. They were quite nice, and when I inquired if something special was going on, they replied, "No, we're just out for a walk." 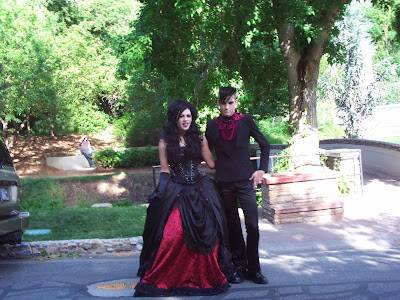 Which kind of surprised me because I thought Vampires would turn to dust when exposed to sunlight.

So I finished my wedding, everything went just fine except Cletus kept trying to pee where we were standing waiting for the Bride and Groom to return and I can't allow him to do that because it smells and is really icky to stand in. (Plus, he knows better and should have done it before we arrived.)

I got back to South Gate and my friend Bill was waiting for me. We chatted for a couple of minutes when a kid who looked like Shaggy from Scooby-Doo rode up on a bike jerry-rigged with a tote containing two coolers, a sunshade, and a loudspeaker playing calliope music.

We were all so damned excited you'd have thought the Publishers Clearinghouse Prize Patrol had arrived with one of those huge fake checks for ten million dollars made out to "Salt Lake Carriage Drivers."

Everyone there bought something and I said, "Dude, (yes, I say dude a lot actually) you MUST come back here EVERY NIGHT!" And he was happy to make so many sales in one spot he said, "Ok I will!"

So, even if the night is dead I still have the ice cream man to look forward to. I should have taken his picture, but I was busy scarfing down a vanilla Drumstick.

And the final fun-o-rama thing that happened, occurred while I was yet again up in the Grove. Crazy Shelley, one of our tribe, called over the radio because someone else asked why there were cop cars in the intersection of Main and South Temple, which is half a block from our spot.

Crazy Shelley explained that while on a ride a slowly moving, but weaving auto entered the intersection. It almost hit her carriage, almost hit pedestrians in the crosswalk and came to a stop when the driver passed out at the wheel. Her passengers jumped out of the carriage, turned off the car and took away the keys from an obviously drunk driver, and then Crazy Shelley called 911.

When I finally passed the fiasco there were no less than eight police cars, two motorcycle cops, a Gold Cross ambulance along with a Gold Cross supervisor truck, a fire truck, and a UTA vehicle. Finally the tow truck arrived and the intersection eventually cleared out but it was jam packed full there for a little while. 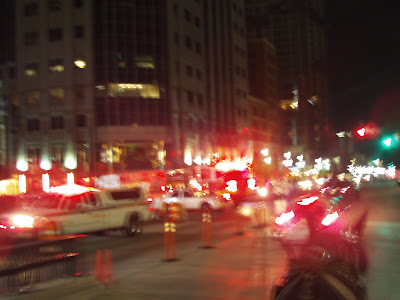 So, as you can see, Saturday was an adventuresome evening. And I'm so glad I had my camera. Because nights like that just don't come around all that often.
Posted by Lisa Deon at 11:07 AM

hey read your blog now you can go vote on todd pictures!

alrighty then - let's hope the universe got that out of its system for awhile and you and I can just have a very busy, non- nutsy night tonight! ---MB
a

It was indeed an odd night...
The pics are always great :) Im glad you share them.. Makes things so much funner :)
Plus, you just cant explain in text, some of the things we witness...lol

Fun filled nights. I especially love the one of the night for life couple. I also understood that they can't have their picture taken. May all your nights be as exciting as this one.

And who says Salt Lake is a boring town? I'm just sorry I didn't work that night. I would have loved to have seen the African wedding and the vampires.

I've decided I'm going to start carrying my camera too so that I can whip it out when a certain category of tourists (you KNOW who they are)whips their gallizion cameras out. I think it's time for a picture showdown. ;-)