I know what you were thinking... you thought I was going to say "Honey Boo Boo." Well, I an so very happy to say that I have never, ever, EVER watched that show. The beauty pageant scene from "Little Miss Sunshine" was more than enough "pageant" for my lifetime, thank you very much. Although, truth in advertising, I LOVED that movie and love the soundtrack by Devotchka even more.

But I digress. It seems that the area around Temple Square has become the Vortex of Weirdness. I mean, even though it was kinda weird before. But this past weekend there have been a plethora of odd and quirky events, beginning with a guy on Friday night trying to cram some kind of food down my co-worker's throat. And not just my horse, but other horses working that night. Believe me, we carry whips on the carriages to use on the humans. I advised random horse treater that MY horse did not take candy from strangers.

On Saturday, a guy tried to play "Chicken" with me. So my question to this guy is, "Why in holy hell would you decide come straight at a 2000 pound animal with four legs and the mentality of a toddler, dragging a four wheeled vehicle containing five people, one of which has a good sense of humor but a very short temper?" Oh, and did I mention that he was WALKING?

By the way, he flinched first, so Tom and I won. But I'll give Tom most of the credit, because he has nerves of steel. Except when he's scared of stuff, like his own urine. 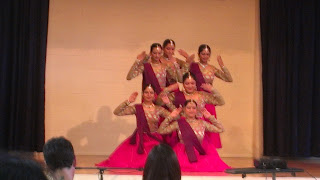 We don't work on Sundays, so we actually had a weirdness break. Although Wease and I went to India Fest at the Hari Krishna Temple. Which was a lot of fun. Plus there was food. And jewelry. And I love, love, love Indian costume jewelry. So we had a great time getting our Bollywood on.
(* None of the women in that photo are either me or Wease.)

Then Monday came, which means another day at work, and a crazy woman having an "episode" while on a carriage ride, tried first to leave her kid on North Temple. And when that didn't fly with the carriage driver, she walked away at South Gate, leaving her child in the custody of, you guessed it, a carriage driver.

You know, maybe I will start watching that Boo Boo show. It can't possibly be any wackier than my life, right?

Visit this great book review blog to read Ten Things My Readers Would Be Surprised to Know About Me. And make sure you sign up for a chance to win one of three copies if my novel, The Carriage Trade.
Posted by Lisa Deon at 9:14 PM

And then on Thursday, a guy with a bomb shut down downtown. The crazy has no end, apparently...