The Importance of Films and Squirrels

No need to poke me with a stick. I'm not dead. At least as of this writing.

I've just finished working the Sundance Film Festival, moving my office from the main floor to the (da da dum...) basement (actually it's light and airy down there, but bloody cold sometimes) and I turn old soon so I'm enjoying my birthday-week-festival. Also, I'm back to writing more of a book. Some of you people who have been harassing encouraging me will be pleased to hear that.

Today Mr. Slave Driver and I went to Wal-Mart, where the bulk of our conversation centered around the new shopping carts. I kid you not. Pathetic? Yes, I'll agree with that. But hey, where else would you hear such witty and sparkling dialogue as this:

Mr. SD: "They have new shopping carts. Wait until you see them."

Mr. SD, having been to Wal-Mart the day before and is therefore in the know, points out the shiny, lighter blue plastic trimmed carts while demonstrating how effortless it is to push them since the brand new wheels are not gummed up with body hair, string, Jujubees, old price stickers and, well, gum.

"Look, they glide across the floor."

They do. They really, really do.

SD: "It's like pushing a shopping cart on a cloud." I stop for a moment, fondle the non-hacked up handle, take a deep breath and say, "Mmmm. Don't you just love that new shopping cart smell?"

A little while later;

SD: "I could shop here for hours and never once feel like I'm wrestling a pig."

Mr. SD: "Until you get to the checkout." 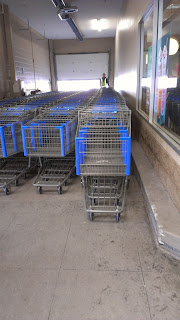 Yes, I did in fact stop and photograph the brand new shopping carts.

Anyway, the real reason for this blog post (besides the aforementioned  reminder that I am not dead) is to talk about the importance of film. Not that I want you to quit reading. Really, read something every day or your brain will rot. Especially if you tend to plop on the couch and watch reality television. Because while pundits predict that the Zombie Apocalypse will begin with an aberrant strain of rabies, or something viral and possibly related to Mad Cow disease,  I'm of the opinion that reality TV will turn your brain to mush. By extension, your body will crave to replace the mush with vibrant brain cells. Thus the propensity of Zombies to eat brains. They're not hungry, they're attempting to replace grey matter. They just go about it in an ineffective manner.

So, films. While at Wal-Mart we often dig through the $5 DVD bargain bin. I've found some movies in there that in the not too distant past that I paid full price for, which really chaps my ass because I'm cheap. But I have also been blessed to find some not-so-recent movies that once were at the pinnacle of pop culture.

Go ahead, I know you want to quote it. I always do.

"You got a pretty mouth."

I made PFC The Kid watch the first twenty minutes. They pull up to the gas station, and that's where the Ronny Cox character gets into a pickin' and grinnin' contest with the inbred kid sittin' on the porch. That scene is dynamic. But what I pointed out to PFC The Kid was that they filled up the gas tank of a Country Squire station wagon and it was something like $4.12. When I noted that, she said, "Per GALLON?" I explained that it was for the whole tank. I also had to tell her that the buff looking tough guy was Burt Reynolds before he went and knocked on the door of a bad plastic surgeon. Probably one recommended by Kenny Rogers.

Today we purchased The Exorcist. Cutting edge and really scary when it premiered. Now it's kind of "Meh," (shrug) and tame by the horror flicks and CGI of today's standards. (I also have the original 1968 version of Night of the Living Dead by George A. Romero which is in black and white. It's actually more a comment on society than zombies, but I digress...) But to me the music never gets old. Play "Tubular Bells" and I'll recognize it every time. Just as when I hear the Da DUM, da DUM from Jaws, I know bad. shit. is. gonna. happen. 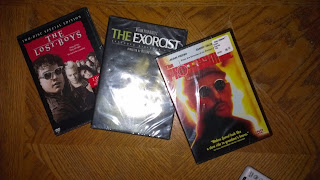 Another great film I got today is The Professional. Jean Reno and a very young Natalie Portman. In December I picked up Lost Boys. Vampires were bad ass back then, not all sparkly and filled with angst like they are now.*

And here's a confession; not only did I use to cruise the pre-viewed movie bin at Blockbuster and whore up on them at 5 for $20.00, but when the Blockbuster by our house closed, we purchased three of their wall mounted DVD racks. Now, I currently only have one installed, but since they can double as a bookcase, I'm considering having Mr. SD put up the other two. 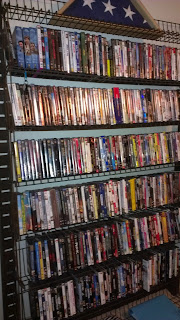 Because at the rate I'm going with movies, "We're gonna need a bigger boat."

Oh, and squirrels are not important at all, unless you're asking Kathy Bates for directions. In which case, "You should have bought a squirrel."

*Fun fact; Jami Gertz attended my high school. Of course, so did Hillary Clinton, Harrison Ford and CNBC's Scott Cohn, who I do actually KIRL.

And yes, I do tend to ramble. But so do squirrels.

I picked up Ben Hur for $5 and nearly dozed off several times in the first half. It was the music that did it, but the second half roused me, although it reminded me that Charlton Heston was never very handsome. I did enjoy the chariot race.ndmittlj

I'm stalking you tonight...
Anyway, I LOVE Night of the Living Dead (Svenghouli did an awesome intro during Creature Features on WGN back in 1973)and this post had me laughing out loud. The Wal Mart carts and forcing your kid to watch Deliverance were the highlights. The DVD rack is RAD.

Lol! Funny you mention Son of Sven... Rich Koz is a friend from waaaay back when I was on WMTH , the radio station for the Maine Township High schools. He was an alumni and did the Chicken Man schtick on WFLD ch 32. (S of S is on Facebook, you know...)