Women and their Geldings...

My horse, Dreamer, and I have been together since August of 1992. In that time we have moved twice. In 1995 we moved from Illinois to Missouri, and in 2003 we moved from Missouri to Utah. Since he came into my life I've also had a child, changed jobs five times, and began a career as a writer. Through it all, Dreamer has always been a member of our family. Even when we left our farm in Missouri, and had to liquidate our livestock which included three other horses, Dreamer has still been along for the ride. Up until a month ago, he lived a lazy life in South Jordan. Once in awhile we would ride him, but really the only thing about the facility we liked was it's proximity to our house. It was close. But the times I had available to visit him, since I work nights, are days. And most days no one was there. I have a thing about riding with no one around. In Missouri, Dreamer kicked me in the chin when I was alone, with the exception of my 18 month old toddler, on the farm. One frantic land-line (no cell) phone call to Mr. Slave Driver, an emergency room visit, and 11 stitches later, I decided that working with 1000 pound animals while alone was a bad combination.

That was my decision. Your mileage may vary. 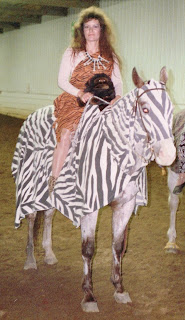 Dreamer as a zebra and Slave Driver as Jane. Mr. Slave Driver was Tarzan. Dreamer's costume was made from funky old zebra striped waterbed sheets. Recycle, that's my motto.


Last month, Dreamer was sent south, to a  hippotherapy facility called Courage Reins, for an interview.  And when I say 'interview' what I mean is a tryout. An audition. The facility serves individuals with mental or physical issues and making sure a horse has the correct temperament is essential for their program. I wasn't worried. We decided long ago to bombproof our horse because we had a child. So Dreamer had to put up with all kinds of nonsense and shenanigans. Like this: 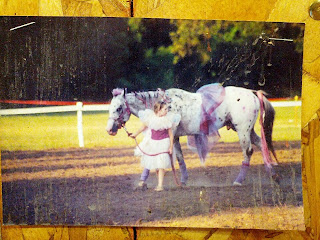 This is The Kid and Dreamer at a horse show in Missouri. He's a ballerina. I can't remember exactly what the hell The Kid is supposed to be. (Yes, I'm a pathetic mom.) I put the costume on him (by the way, it takes about four yards of netting to make a tutu for a horse...) and he looked, sniffed and ho-hummed the outfit. That, however, was NOT the reaction from the horses we passed while walking to the arena. By their violent and crazed reactions, you would have thought he was being ridden by Godzilla.

But he was a show horse from the time he was foaled, so having weird stuff put on his body was nothing new.

After moving to Utah, I again dressed him up for a Halloween party at his barn. This time he went as a Unipegaloosa. That's a combination Unicorn-Pegasus-Appaloosa. He's wearing a horn, but it's kind of hard to tell with the angle of the photo. 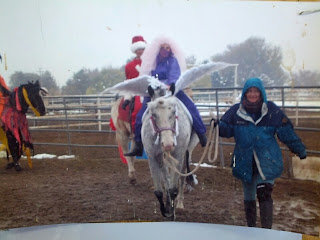 Once again, I have no idea what kind of costume The Kid is wearing. Some kind of Arabian dancing girl with a pink tutu headpiece. Yes, that is the kind of mom I am. I can tell you exactly what my horse is dressed as. My kid, no so much.

What all this is leading up to is this: He passed his 30 day trial with flying colors. So now, at the age of 24, Dreamer begins his new career as a hippotherapy horse. The facility is very nice, and everyone that finds out I'm his owner feels compelled to tell me how much they love my horse. What a good boy he is. How wonderful it is to have him in class, and how well behaved he is with the children.

And really to me it's not a surprise. It was on his back that The Kid learned to ride. (Yes, I know this picture looks cheesy... back in the stone age we didn't have Photoshop so we had to make up weird photos the old fashioned way, with scissors and glue sticks.) And he was schooled early on that it was in his own best interest not to screw around. So much so that now, when he feels you become unbalanced, he stops. dead. in. his. tracks. 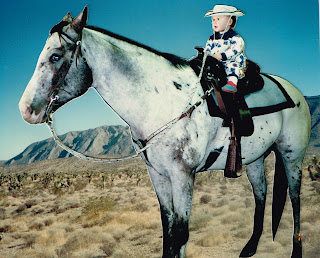 So now he has a new home, a new job, and hundreds of people to pet him and love him up. 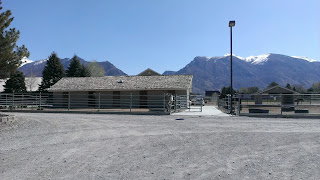 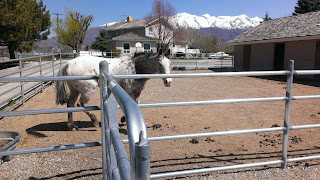 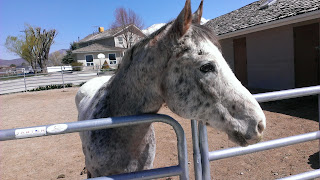 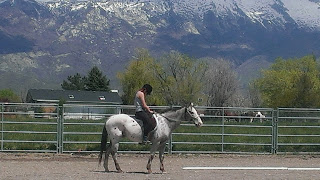 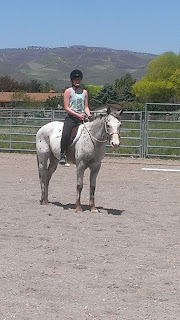 And, The Kid is still riding him.
Posted by Lisa Deon at 1:32 PM

Dreamer is going to become a very special friend to some wonderful children because of the love and dedication that you and your family have given him. The kid still looks great sitting on him. And...please 'Jane' ... perfect. What a grand horse. Good Job, Dreamer!

Courage Reins is a nice facility...but do check on him once and a while. That is also the facility where I sent my first horse for a try out, after his show retirement and he somehow got into fertilizer one day which caused his liver to fail.

Thank you both for your comments. The best part of the deal is we still own Dreamer. So while he is getting much needed attention and exercise, we still visit him. And own him. ;)

Also, one of my co-workers works at Courage reins so she keeps an eye on him for me.

What a lovely retirement. I hope he never gets angry or fat riders. :)TX

Oh, dear. I have to type the two words. I don't think that first puddle of letters is a word at all. Wish me luck.

He sounds like, well, a dream horse. That is nice for him and the kids at the therapy center, that you are sharing Dreamer. He sounds like a very sweet horse. And he looks good in a tutu.

Oh, congrats to you...to him, for 'passing the test'! It takes a special horse to do hippotherapy of any kind. I loved each and every picture of him in costume - what a sweet horse!

Yay for Dreamer!! A friend of mine donated her horse to a facility that assists kids with challenges. They are taking very good care of her horse!