Another Weekend Behind Us...

Last week was a hectic one for the Slave Driver household. On Thursday we trekked up to Logan, Utah to attend the student orientation for incoming freshmen at Utah State University. Never having attended "real" college ourselves, Mr. Slave Driver and I are excited to be able to wear USU clothing and plaster USU stickers over every available inch of our vehicles, and cheer for USU sports teams. We are honored to be associated, by proxy, with so fine of a university. And, you know, proud of The Kid for going there.

We spent the night at a hotel in Logan so we wouldn't have to get up at the crack of dawn and make the drive, although we had to get up at the C.o.D. anyway to get The Kid there early enough to take a math test. Now I know for future reference to stay at the University Hotel. It's only steps from the building  where we spent the entire day. We could have shoved The Kid out the door Friday morning and slept in another couple of hours. You know, like typical college students.

Live and learn, I guess.

On Saturday I was involved in a multi-author book signing at a local book store. I was joined by fellow writers Doree DePew, MaryMartinez, Stanalei Fletcher and Anna Sugg. Many friends and family stopped by, including my carriage tribe, because they are loyal like that. I still feel awkward "autographing" a book for someone who will surely see me wandering around the driver's room in my long-johns come December, but they appear to enjoy it, so what can you do, right? 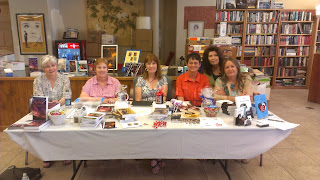 After the book signing Mr. Slave Driver and I attended a 25th Anniversary for one of his employees. They are Hispanic. I must admit, while I grew up in the Chicago area and have been to many types of celebrations, I have never been to a Hispanic event. The invitation was in Spanish. My mother, who is the most fluent reader/speaker of Spanish in our family, translated the invitation for us. The extent of my Spanish is being able to ask the following:

And, as with many other foreign languages, I can swear at someone or tell them to shut up.
It was fun but we were tired because we're getting old and the only liquor they offered was Budweiser. Mr. Slave Driver was the designated driver, and I don't drink beer of any kind because it's gross. We stayed for a respectable couple of hours then headed home to pass out.

Sunday was Father's Day here in the US. We go to a lot of movies, and this day was no exception. Mr. Slave Driver chose "Another Earth" as our movie of the afternoon. Now, I like Will Smith. I liked him in just about everything, from "Six degrees of Separation" to "Wild, Wild, West". The thing I enjoyed about "Another Earth" was the way they recognize how language evolves. It reminded me a lot of "Firefly". However, watching this film I was left with this burning question:

1000 years in the future they have the technology to evacuate Earth for another planet in the solar system, yet their most advanced weapon is a glorified Ginsu knife? Really?

And what's up with the space ship? I totally understand why it broke up after being hammered by asteroids; it's made of papier-mâché, PVC piping, that orange plastic safety fence (but grey, not orange) car wash brushes, and long, wide rolls of toilet paper. Definitely not space worthy, in my humble opinion. But, then again, I'm not an engineer. And, I don't like to fly.

Anyway, the busy weekend is over, and I'll get back to writing books. And there will be a third Carriage Chronicles. I have to finish "Things to do in Big Rock while you're Dead", first, but here is an excerpt from Chapter One of (apparently I cannot get away from long titles)...

The Accidental Star of the Dog and Pony Show

"See, there's where your logic is flawed. Bill is the kinda guy who will search the ends of the earth for me until he dies, so if you kill me, you have zero chance of being together. He craves closure, and will devote the rest of his days trying to find out where I went and what became of me. And that means he'll have no time for a relationship with you, and you'll end up being ignored. But if you save me—" Carlos splayed her hand across her chest and arranged her face in the most frank and innocent expression she could manage. The kind she used when dealing with the police, and customers she felt were being stupid. "Then you'll be a hero, and Bill loves heroes. Then, his moral code will insure that he will show his gratitude by being with you forever."
Carlos nodded earnestly upon finishing her carefully crafted lie, drops of sweat racing down her face, landing on her already drenched tank top. She made sure to use only Bill's name, and not refer to him as her husband. Calling Bill her husband only enraged the wild-eyed woman she was negotiating with.
The past twenty-four hours had not gone well for Carlin 'Carlos' Farley-Fantazma. Being held captive in what she assumed was an abandoned hay barn had given her ample time to review the events leading up to her current situation. In hindsight she believed that her biggest mistake was not necessarily going with the rabid, crazed fan she was dealing with, but neglecting to inform anyone from her tribe that she was leaving. And as improved as her mental functions were becoming, having brain damage tended to impair her judgment. Which was why she was having a bizarre conversation with a lunatic somewhere in the middle of nowhere.
Carlos had awakened that morning with a blinding headache, face down in moldy smelling hay. For just an instant she thought that she was back living in the apartment above the carriage barn, and had somehow passed out on one of the ton square hay bales stored by where they kept the Vis-a-Vis. She inhaled deeply, not opening her eyes, but started coughing at the pithy odor of poor quality alfalfa mixed with mold and mud. She opened her eyes and pushed her body up, her confusion compounded by the cold realization that besides being in a dark and foreign building, she was also without her prosthetic left foot. And the back of her skull hurt like hell.
"Somebody's in a shit-load of trouble," Carlos muttered out loud. And a short time later she came to the conclusion that the somebody in a shit-load of trouble was her.

You, Miss Lisa, had a very busy weekend. But thank you for spending part of it with me.

As always, Stanalei, the pleasure was all mine! XXXOOO's

Ah, Freshman Rush (not for the sororities, but for the folks). We'll be doing that in the fall. But the college is close by, so no Hotel d' Campus for us.

I loved the sample of CT3!

And now, to take my turn at the giant wheel of Prove You're a Human. Wish me luck...