It's been a rough couple of weeks for the folks I work with. After being officially retired, one of our horses, Bart, was finally transported to his new home. He was living out the rest of his days with his team mate, Belle, and one of our former drivers who had waited for this moment with great anticipation. Ten days after arriving, he unexpectedly passed away. The news came as a shock to us; Happily Ever After is supposed to mean riding off into the sunset. It's not supposed to end in death. And if Bart had gone to someone we did not personally know, someone not connected to our carriage tribe, we may never have discovered his fate.

We collectively mourned his passing, confused and angry about the unfairness of it all. The women who loved Bart the most, one who babied him for years but could not afford to keep him, and the other who longed for his arrival at  her rural property, and rejoiced when he finally came 'home', were heartbroken. It's not fair have your excitement and expectations met with an untimely death.

As the stewards of our animal friends, it's our responsibility to end their suffering. The elephant, some breeds of parrots,  and giant tortoise live at least as long, if not longer, than humans do. The rest of our non-human family members have various life expectancies that are considerably shorter than ours. This means that in our lifetime, we will have many of them enter and leave before we do.

Immediately following Bart's passing, one of our drivers had to euthanize her personal horse. Age and a chronic condition were the reasons she released her equine partner from her suffering. It hurts. It hurts like hell, but it's what we have to do. Our responsibility to our animal friends doesn't end with feeding, grooming , exercise and affection. Like it or not, we are the harbingers of their demise. That's why we are recipients of the 'Big Brains', to analyze the situation and bring about a resolution.

Saturday morning I awoke to the news that a little guy with a big internet presence, Cupcake the Herd Master,  a rescued miniature horse from Blue Star Equiculture, had passed. He was too young, too adorable, to well loved to even conceive of this happening, yet it did. Shocked and saddened by the untimely passing, I sent off a note of condolence via the internet.

This morning I discovered that we have lost yet another star in our equine solar system. If you've read either of my novels, The Carriage Trade or The Re-Education of the One Trick Pony, you're familiar with Tony.  Tony was a gorgeous Belgian draft horse. His golden coat, creamy flowing mane and tail, along with his soft eyes and noble head,  sold rides for any driver who worked with him. Customers were drawn to the big guy, and if you were fortunate enough to work with him, your job was made that much easier. People would bypass the other horses and want to ride with you. Not because of your stellar salesmanship or witty repartee; because Tony was such a handsome example of horse flesh.

Tony had been retired for a while, out to pasture (yes, we do have one of those) with some of the other horses owned by the people who run the carriage barn. His passing was sudden and unexpected. We are still in shock. After gathering information about the circumstances, I had to make one phone call. It was a very difficult one for me to make, but it had to be done.

Unbeknownst to many of you who have read my books, there really is a Bill. He's nothing like the Bill Fantazma from the Carriage Chronicles. He's not much taller than I am, and is a self described "Stupid Irishman." But the real Bill's love for Tony is no less than that of the character in my books. Bill adored Tony. Although he is no longer a carriage driver, if Bill knew I was working with Tony, he would come downtown and visit him. Not me, Tony. He would bring Tony treats, and, although we are not allowed to give our horses treats when they are working, Bill would stuff apples and carrots down Tony's gullet, hug on him for a while, then meander home. It was a hard phone call for me to make, but I felt that it was owed to both Bill and Tony. 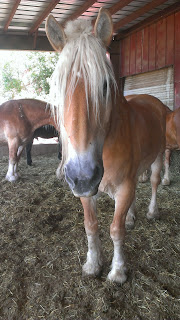 July has been a sucky month for us. I am a control freak, and when I have no control I feel helpless and angry. But I recognize that there are so many things out of my control, that I have to accept them, and move on.

Tony, Bart and Cupcake are gone. But I have comfort in knowing that they live on in my writing. And I can only hope that it also brings some measure of solace to those who knew and loved them.
Posted by Lisa Deon at 10:53 AM

I'm so sorry. Not being in control, and just having bad stuff happen to you, one right after the other, is something that has been on my mind a lot lately. Why? I'd love to know why.

Thank you, Nuzzling Muzzles. I wish I knew why. After I heard about Cupcake, I thought, "Okay, deaths happens in threes. So he is number three. I can breathe a little." Now I can't help but wonder, was Cupcake not #3, because I didn't 'know' him? Or was he #3, and we're starting all over again...

i have avoided reading this post. 6 weeks later i finally forced myself to. losing bart so soon after his coming home was unbelievably hard. when i started making arrangements, everyone assumed it was belle. my sweet husband offered to come home from work even though he had just gotten there and was swamped with jobs.
i am grateful for having him at home and knowing that he is buried in the pasture that he galloped in for the last days of his life.
he didnt die because he was a carriage pony from 1998-2013. He brought joy to a lot of people. He will not be forgotten.