The Re-education of the One Trick Pony

You see an unfamiliar name written next to yours when you walk into the office and look on the master sheet, and you shudder. 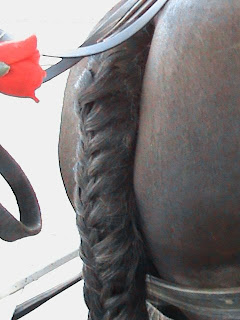 Trainees are a fact of life in the carriage trade. Everyone driving carriage had a “Once Upon a Time…” The seasoned drivers, with the exception of a few who have the personalities of Rabid Pit Bulls or the I.Q. of a gnat, all get stuck with a trainee once in a while. Several drivers, and I won’t say exactly who, are assigned trainees with explicit instructions to “Run them off.” For some of us them it’s a specialty.

Anyway, the state requirements in Utah to be a professional carriage driver are as follows:

2) You must hold a valid/current Utah drivers license

Now, just because you qualify with those two items doesn’t mean that we will hand you the lines attached to a horse and wave bye-bye, turning you loose on an unsuspecting public.

Nope, first you go through the training program.

Preparation for writing this blog involved me asking Ro, the barn/office manager, several questions pertaining to the success rate of our training program. She was not real happy because I made her do math, and the first time we ran the numbers we came out at a
–20%, so we had to refigure. This is what we came up with:

50% The number of people who actually come in and begin training after calling about a position as a carriage driver and/or filling out the application. Some folks don’t even make the first cut. You have to be able to lift at least 30 pounds, and we stay out until 11 pm on weekdays and midnight on weekends, so if you have another job (for most of the drivers this is a second job. Except me, this is my full time/only gig. Yes, I know, I live a charmed life) and you have to be up early, this is probably not for you. May I suggest you consider a career as a Wal-Mart greeter? Apparently the only requirement is that you be upright and occasionally breathe.

You see, where we stage, in front of the South Gates at Temple Square, you have to go into Temple Square if you need to use the restrooms. Temple Square has three escape routes gates, North, South and West. So sometimes the trainee asks to “Use the john”, and never comes back, having slipped out the West Gate and hoofed it to the barn and their automobile. It’s only about ¾ of a mile, so it is definitely within walking distance. After about 30 minutes of “bathroom” time we figure they’ve bagged it and run off. We see that as a sign that they don’t have the intestinal fortitude or character to do the job anyway. After all, if just tacking up the horse and driving it to Temple Square, then standing around with the drivers is too much for you to handle, then you’re going to melt down big time during the difficult stuff. You might want to consider a job as a ticket seller at the Googleplex. That looks low stress.

So now we are at 25%. This is where our math went south the other day

Of the 25% that actually survive get passed off after training for three to seven nights (without pay, mind you. And I don’t share tips with trainees, and I’ll tell you what I tell them: I know how to drive a carriage. I don’t need training, and quite frankly, most of the time having a trainee is like swimming with a brick around your neck. So if having a trainee means cutting into my income, I would tell Ro not to give me anymore, because, you see, I don’t need you. I already know how to drive a carriage. You don’t.)

So, sorry for the long interruption, but of the 25% that actually pass, 10% quit driving within a month, which is their probation period. Why? I don’t know. Most of them have a romanticized idea of what we do anyway. I had a trainee who sang opera in college and wanted to sing arias to his passengers.

I’m sorry, we’re strange people, but that is “Freak Show” quality right there, my friends.

Then we get the guys who are new fathers and are trying to make a little extra on the side, or just get the heck out of the house. They bag off after a short time because their spouse resents the fact that they get to leave and stick them at home alone with the kid. I can’t say as I blame the new moms. That’s why I drive. I have a teenage daughter. It was either drive carriage or join a carnival for five years or so, or end up in the Big House with a prison record.

Kids. You can’t live with ‘em and you can’t legally sell them on eBay. Bah!

Anyway, for whatever reason many people who do pass the training never come back after the first month or so. To tell the truth, new drivers don’t have the selling skills the seasoned ones do, and many times they don’t make a whole lot of money. But it takes time, and that’s what I try to tell them. So if you’re looking to get rich quick, may I suggest you join Amway or Usana? I hear they churn out millionaires daily.

Okay now, we’re down to 15%. And that’s not too bad, and I’ll tell you why. Because 15% is the summer figure. Come September and October it starts getting chilly and the business drops exponentially (sorry for using such a big word, * B *, I know I just recently defined “Superfluous” for you. I’ll tell you what this one means next time we’re at breakfast) so while they are standing around freezing their patooties off they are also not making any cashish. This causes yet another drop off of about 10%, which is too bad on their part because if you can scratch your way through September, October and the first three weeks of November, you eventually hit the mother lode.

So that’s bring us to our 5% solution. Yep, that’s the figure Ro and I came up with for the success rate of our Carriage Driver Training Program.

Now, I don’t know how this compares with other training programs in other professions, but I’m sure it’s a pretty low success rate. I’m okay with it though, and I’ll tell you why. Because I’ve discovered in my experience in driving carriage and training potential drivers that besides the Utah State qualifications (21, valid Drivers license) there is another quality severely lacking in many of the applicants. 95% of them to be exact.

You see, to drive a carriage you don't have to be real smart, but you need to be at least 1% smarter than the horse. 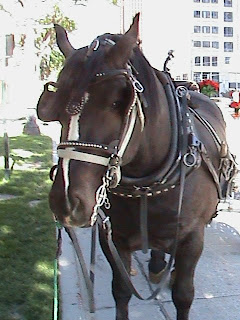 Nice pic of Mr. Charlie lookin' handsome as always. I think with a horse like Charlie it actually requires you to be about 3% smarter than the horse :)

I would have to agree on you with that Stace. The 1% applies to horses like Kid, Rex and Cletus who, if they had thumbs to make change and could speak English, would be able to do the job driverless.