The things we do for love

I wanted many pictures at this event. Many. So I grabbed The Kids really nice digital camera, and put it in the car. The Husband also grabbed his 35mm camera. On the way to the event Sammie Two Chews, my freshly groomed (Thanks again, ~A~) Pomeranian managed to open the camera and spill out the batteries. Now, I DO NOT KNOW HOW THIS HAPPENED. MAGICAL THINGS HAPPEN IN THE BACK SEAT OF THE TRUCK. I HAVE STOPPED ASKING HOW. AND QUITE HONESTLY I DO NOT WANT TO KNOW. So, after the dog messed with the camera it wouldn’t work. Maybe the batteries were dead, I have no idea. So, we still had The Husbands 35mm camera and there was another digital in the back seat that is a “work” camera. I told The Kid to grab it and give it to me. She took it out of the case and started taking pictures with it.

Brown Dirt Cowboy always has the funky one ear down one ear up thing going on. He is the best dog we have ever had the pleasure of have as a family member. 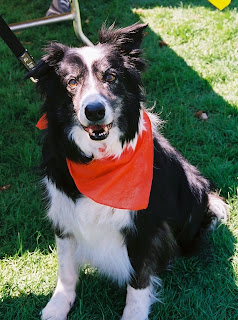 We arrived at the fundraiser venue and got organized with the two dogs and all of our stuff, water bottles, promotional hats and paperwork. Then The Husband got a work call at the last minute so we had to wait for him to deal with that. Finally we met up with the rest of the “Dog Pack” and signed in.

The Kid getting special recognition for bringing in the big bucks 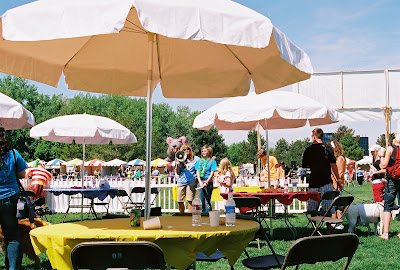 Our “Dog Pack”, a group of 5 of more fundraisers who join as a team, was actually a corporate sponsorship. The Kid, all on her own, raised $504.00 for the event, and the company The Husband works for kicked in a separate amount of $5000.00. The money went to No More Homeless Pets in Utah because we nagged him and nagged him until he convinced the rest of his co-workers that if they didn’t agree he would make their lives as miserable as we were making his. Shit, as we are all aware of, does indeed roll downhill.

Anyway, we finally got ourselves together and went to the Buster’s Backyard area, staking a claim to a table. It was at this point that The Kid informed me that she had left the work camera in the truck.

The truck is parked a half a mile away, and the flow of human and canine traffic is not in my favor. I was getting ready to go swimming upstream when The Husband said “Hey, I still have my camera, we can use it.” So, okay, I like digital photography because of the instant gratification, but 35mm has better quality so I can go with that. Years and years ago I photographed Chicago area Rock bands. You know, back when they performed in caves, using instruments made from dinosaur bones and rocks, and my trusty Vivitar X-C traveled the tri-state area at my side.

Anyway, The Husband begins making the rounds, taking lots and lots of photos so he can send them into his company’s newsletter. Then the strut starts and I take a bunch of pictures so I can post them. We get back to our table and we take more pictures, really good, cute pictures, and then out of nowhere he says “Oh Crap!”

“You are not going to believe this,” he tells me, opening the back of the camera for a visual, “but there’s no film in the camera.”

After agreeing that he did indeed win the “Idiot of the Day” award, he put some film in the camera so it will now actually take pictures.

Of course by then most of the work related people have left, so now it’s just us and our friends. And dogs, lots and lots of dogs. So The Kid takes the camera and goes around taking pictures.

Now, I took pictures I thought would interest people who read my blog, and photos we could send to corporate for the newsletter. The photos that The Kid took? Of a roll of 24, only 6 pictures include people, and The Husband took 1 of them.

They say everything happens for a reason, I’ll let you decide. Personally, I think The Kids pictures are way more interesting then anything I took.

They appear to think if they lean any farther out something is gonna eat them.

IMHO the dog on the left is enjoying itself. However, the Dog on right would like to see lefty walk the plank.

This is not my Pom. My Pom is way cuter than this one.And besides, this one has an evil grin.

You really made me nervous when you put STC in the back with the camera!

But, hey, Kid knows what it's about: the dogs. At least she's sneaking up on dogs, not bears. And they are, indeed, very interesting photos. Kid is not just verbal, she's photal. Um, visual.