You’da thunk it was Brittany Spears…

I was sitting in front of my computer this morning, doing what I normally do when I’m not driving carriage, which is pretty much just goofing around. I could hear the drone of helicopters coming from outside, but that’s normal for us. We live just down the road from the National Guard helicopter training facility by Airport #2, and they frequently fly Apaches in formation 3 or 5 at a time. It makes a lot of noise and rattles the stuff on my walls. My Susie Morton Horse Plates are kept on their display racks by double-sided tape. I’m no fool.

Well, I guess that’s debatable. Anyway, I kept hearing the helicopters, and it sounded like they were circling. This I think to myself, is weird. So, I go out to the back yard, and see a helicopter, but it’s no Apache. It’s a news copter. I go back inside, grab my binoculars and go out front where I have a better view. My good friend and fellow slave driver ~A~ has just pulled up in front of my house because we are supposed to hang out today, go to lunch, use her discount to get dog food cheap, and go see my horse, Dreamer. ~A~ tells me that just a moment ago there were two news copters. I look to the east, and sure enough, there is one behind us now, too. Circling like vultures, you would think Brittany Spears had moved in two blocks over.

Now, I notice is that they are hovering over the direction of the High School and Middle School. So, of course, Columbine immediately springs to mind. That’s the way my shit works.

So we run back into the house and check the two channels that own the copters. Nothing but icky soap operas. Bleh! So we hit the computer and see if anything is on the station’s websites. Nothing on one, but a very small blurb on the other one says:

“Cougar spotted roaming in neighborhood. Residents warned to stay inside by reverse 911 call.”

Well, that’s a relief, because stuff like that never happens around here, and besides I never got a reverse 911 call so we must be okay. But the choppers are still there, so we go back outside and at the end of my street is now filled with Animal Control trucks, cop cars, DNR vehicles and news vans.

“Holy crap, when did they get here!”

I see a couple of uniformed guys struggling with something on a stick and run back to the house yelling for ~A~ to come out. Sure enough, in front of Val and Val’s house (I don’t know why they have the same name but they do) they have cornered a cougar and are getting the rabies stick over its head.

I say to ~A~ “Stay!” (I don’t know why, it just came out. I do spend an awful lot of time alone with two dogs, you know) and I run in to grab the camera (yes, the same one that wouldn’t work on Saturday) and it’s GONE! Someone has taken it to SCHOOL! So I go outside, once again run afoul by the God of Kodak Moments, and use my cell phone. Then I use ~A~’s cell phone. They’ve gotten it into a cage in the back of the DNR truck now, and it’s totally out in LaLa Land because they tranquilized it. Soon the neighbors are coming out of the woodwork, and I look at Val and Val’s house and say “I wonder if they’re home. They have two dogs that are usually out in the back yard.”

As it ends up, Val and Val and their 2 dogs were hiking in Millcreek Canyon. They pull up and 50 gazillion people are in front of their house with news trucks and cameras and cops crawling all over the place. Val and Val are both like “WTF?”

But I finally did get a camera, and these are the pictures I took. I cannot decide which ones are more interesting, the ones of the cougar, or the media circus that followed it. Now I know how Brittany must feel. 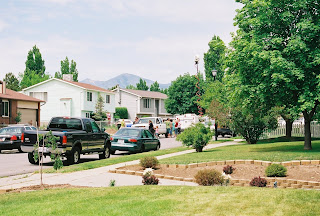 The Gathering of the Villagers 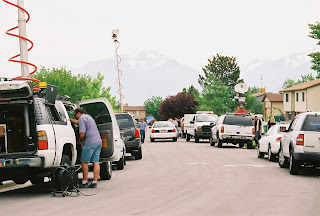 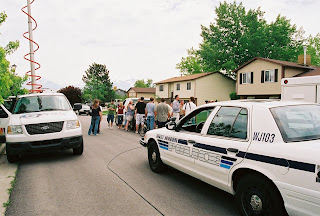 We haven't seen this much 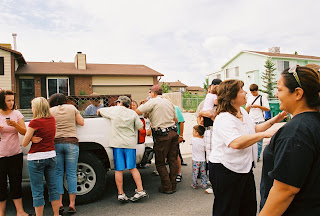 The woman in the white T is telling anyone who will listen that the cougar was in HER yard first. 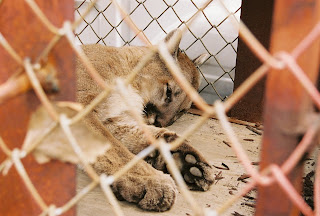 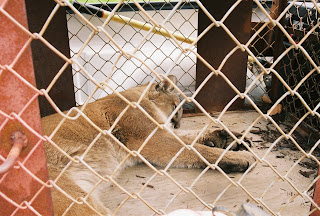 It was just a juvenile female, not Catzilla 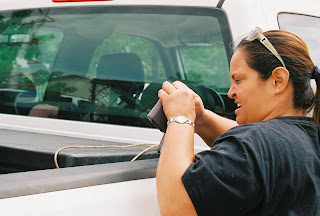 Val #1 getting a picture of her surprise visitor 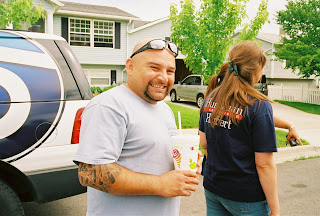 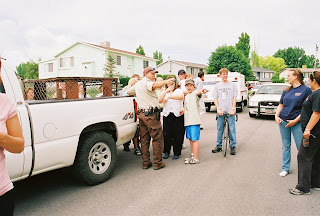 "It was right over THERE!" 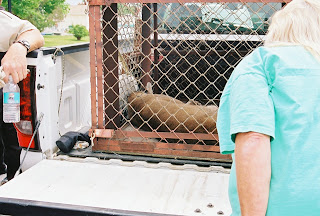 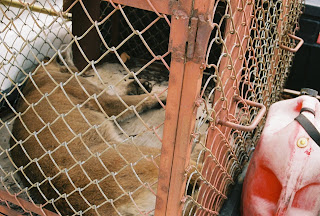 Wow, cool. Last week we had choppers in the area, but it was just some car thief running through the bushes.

Nice neighborhood--and wa-ay cool cellphone! Great Pix! And so many of them!