Rex came from a competing company, and that's what the drivers called him.

You've seen a picture of Rex, but I don't talk much about him. There is a simple explanation for that;

Mind you, not liking Rex the Dumpster Diving Crack Horse has nothing to do with respect, because I have a lot of that for him.

Rex and I worked a wedding one Christmas season (we don't typically do weddings during Christmas; too PITA) where we had to take the bride and groom from JSB to, are you sitting? Their reception at The Sizzler. No, no, it's not some tres chic five star French Restaurant with a similar sounding name as the cheap steak/baked potato/all you can eat shrimp and Malibu chicken place. It is the same place. You know, lots of hunter green, mauve and fern décor. The bride and groom, dead ringers for the models from Grant Woods "American Gothic" (although younger and wearing wedding attire not depression era farm clothing) 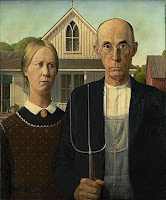 were as peppy and enthusiastic as dry, white toast.
Rex and I took them first to their reception, then we wandered around that end of town for a while. Rex was not too happy being away from his herd for so long, so we paced around the parking lot of Firestone so he could see his reflection and faked him into thinking there was a surly looking red horse walking around in circles next to him. Eventually we returned Chez Sizzler and pick them up, taking them back to JSB.

I asked for Rex when I knew that we would be filmed in a promotional spot for our local ABC affiliate. Having already been in a UTA (Utah Transit Authority) commercial, and numerous wedding videos, I knew there was some equipment that the horses are not too crazy about, like big floppy reflectors. So I took Rex, and he was great, although he got much more screen time than I did, but I'm okay with that.

Another time I was the recipient of a reservation which involved me and a horse to stand around Memory Grove for anywhere from .30 to .60 minutes, have photos taken, then drive the Bride less than 500 yards down the lane to where the vows were to be taken, drop her and leave. I specifically asked for Rex.

Now, if I don't like him so much why, you ask, do I keep requesting him as my co worker?

Because Rex doesn't give a shit. About anything. Fireworks, balloons, big round shiny things, dogs, kids, nothing. He doesn't care if you like him, you hate him, you give him treats or you don't. He even tolerates Marky-Marks hat fetish.

And he is especially good at standing around doing nothing for hours, which is actually a lot harder for a horse than it sounds. When they get bored they tend to get a little edgy after a while and want to get back to their buddies. It's really annoying when you've got a photo shoot and your horse has antsy pants.

There are two really great features about Rex. Now, have you ever heard people refer to a horse as having a "Kind Eye"? Yeah… Rex doesn't have that; he has a shifty, squinty, "I wish I had a thumb so I could knife you" eye. But he does have a naturally curly tail, which is very pretty, and his coat stays sleek all year so even in the worst conditions he's easy to clean up.


Come to think of it, we don't get along because we're a lot alike.
Except my tail's not curly.
Posted by Lisa Deon at 8:54 PM

Rex is the biggest POS on the planet. He was ok as a team with Jack. But as a single, he is not one of my favorites, by far.

Imagine walking down the street, giving a christmas light ride, cars are going by, TRAX is buzzing around, the freaks in the carriage are singing. TDDCH or Rex, for short, drops down to his knees, shakes all over. Jumps straight back up, not scrambling, not heaving, just rockets up and then walks calmly along, like nothing happened. THAT is why he is the dumpster diving crack horse (among other reasons). He has acid trips with no warning, whatsoever. I have heard that they are less frequent now, but I still don't like him.

Hi, I am a new fan of your blog. Hope you can join my free horse lovers club RiderMate.com. It is very active now.

hahaha, what a great post! I'd say his good points def outweight the bad. ESPECIALLY that cute wavy tail!

BPA,
My favorite Rex trick is when we're walking along and he gets pissed at you and STOPS. He knows it jolts the carriage, the customers, the driver; Then just as suddenly he WALKS, and jolts everyone again, trying to induce whiplash, spill cocoa, make babies cry, etc.

I'm sure if there were low hanging branches in the Grove he would do his best to walk under them and try to knock the driver off of the box.

On the other hand he was the horse I worked with for "Disney On Ice", which, for you straights out there, does not include the horse scating, but picking up the Disney Princesses from the back side of ES Arena and driving them around to the front. There we are greeted by hundreds of screaming little girls dressed in their princess halloween costumes. The Disney princesses then exit the carriage to trumpeters announcing their arrival and stroll a red carpet under huge balloon arches waving in the wind. Total carnival atmosphere. Scary for a middle aged human, let alone a horse. And he was absolutly solid.

Thanks for the offer but it looks like your web site is a dating service, and as much as Mr Slave Driver lets me do pretty much as I please, he would probably frown upon me dating. Just a guess.

Twice I have written cute comments and twice WordPress managed to screw up. So, anonymous here to tell you I enjoyed your post, as always. Rock On. Uh, Walk On

The good does not outweight the bad. Now if you want to talk about a fine looking red Belgian, just take a look at Red. He was an awesome horse that was honest, worked hard, looked great(and knew it) and was fun to drive. He was Belle's Beast, too. She was in love.

Just for right now, I will trade pics and not use Belle's pic.

unsongs -- those annoying sounds that people call music, but aren't

I always have problems when posting a comment on BPA'a blog so I feel for you.

Hope all is well in T. Stacey's there, so I imagine the state is on full alert...

Methinks I kinda dig Rex. You two are a lot alike, and I say that with all due respect and admiration. :)