The One Left Behind 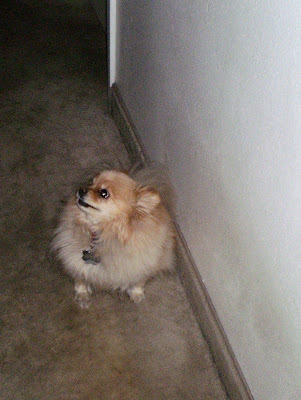 We've been coping with our grief over here this week. Fourteen years with the same guy, suddenly he's gone, it leaves a big hole in your life. I find myself doing things that I became accustomed to doing to accommodate an elderly pet whose vision, hearing, and spatial concepts have been compromised as the years have taken their toll. I used to have to make sure the power cord for my laptop was either up higher then my knees, or way lower. Of course, that was no guarantee that he wouldn't catch it on his toenails.

Sammie Two Chews is the lone dog in the house now. She has been looking for her Big Guy to no avail. To show her displeasure she's pee'd on the carpet twice and pooped in the living room once. To add insult to injury, last week she also needed her annual shots, had her teeth cleaned, nails trimmed and I brushed the heck out of her because she's blowing her coat and was looking kinda ratty. So now she's in hiding under the bed, wondering, I'm sure, what new torture awaits. So I've been trying to do things she enjoys, like allowing her on the bed to cuddle, taking her for extra walks and rides in the car, which she likes a lot. I've also been sneaking her treats from the table, for which I get disapproving looks, but I don't care.

I'll be on the road this week on a trip to Buckeye, Arizona for my cousin's wedding, so blogging might be sporadic. The Winner! Winner! Chicken Dinner! Contest is in its last week, so if you haven't entered, go here and do so.

And thank you for the sympathetic emails and comments. Cowboy was the most awesome dog. We miss him terribly, and the place in the hallway he called his own is a big empty spot, a mirror image of the one in my heart.
Posted by Lisa Deon at 8:24 AM

Okay, I find some small consolation in the fact that I don't have a second dog. It's hard enough to deal with my dog becoming more frail & elderly by the day; to have to deal with another dog's grief would just exacerbate the angst.