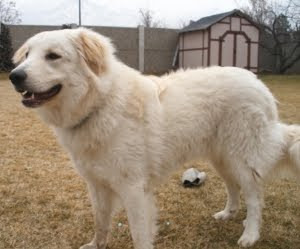 Excitement reigns supreme in the Slave Driver household. We have applied for and were approved to adopt a new member into our family. She's a beautiful girl, only 12 months old, of central Asian descent, desperately in need of a forever home.

What's that you say? A baby? Are you insinuating that we are adopting a human baby? Uck! Not a snowballs chance in Hell. It's a puppy. Kind of. A very LARGE puppy. A Great Pyrenees puppy.

The placement choice for the foster mom boiled down to a lady in Colorado or us. Being locals, we won. YAY! Us!

We went to visit the dog last Monday. As we entered the house we were surrounded by wagging tails and lapping tongues. The foster mom already has a Border collie and an Australian Shepherd. She told us the Pyr's story:

Apparently an 18 year old girl had her puppy in an apartment in the same town we live in. Foster Mom Ruth saw an ad for the dog on one of the local classified web sites and called about purchasing her. Except Ruth's husband wanted an Irish Wolfhound, not a Great Pyrenees. So Ruth didn't purchase her. The next thing Ruth knew, the dog was in the shelter. Ruth made a deal with Mr. Ruth; let her foster the dog until a suitable family to adopt could be found, and after that Mr. Ruth could get his Irish Wolfhound.

Now, as I'm sure you can relate, a dog which when full grown that will top out at over 100 pounds is not necessarily the best choice for an apartment unless you can spend several hours a day exercising it. And I don't know about you, but when I was 18, I had way better things to do then running a mini-marathon every day.

So this beautiful girl greeted us with a huge smile. She's the most laid back puppy I've ever encountered; friendly with strangers, cool around other dogs (which was a concern because Sammie Two Chews, resident Pomeranian is only ten pounds and a bit suspicious of other canines), doesn’t bark her fool head off (unlike the five dogs our neighbors keep locked in their yard with no attention what so ever all damn day long), walks well on a leash, is highly intelligent, and is generally a good citizen.

At least, that's what we were told.

Mr. Slave Driver, whose turn it is to choose a new dog, had to sleep on his decision, because he wanted a Bernese Mountain dog, Newfoundland, or a Leonberger. None of which are in abundance on rescue sites. In fact the only thing this dog and those dogs have in common is "Big." But he decided that she would be a fabulous addition to our family, so he called the next morning and told Ruth that we would be happy to adopt the dog.

On Tuesday evening, Ruth brought the pup to our house to inspect our yard (is it fenced? Is the fencing tall enough that the dog cannot jump it? Is it free of holes that the dog can squeeze under?) And we passed with flying colors. We've been dog people long enough that we know all the tricks.

And I mean all the tricks. So while the foster family extolled the pup's virtues, they also omitted some of the negative aspects of her personality. And there always are, it's just a matter of being forewarned is forearmed:

Her healing and leash skills are not what one would consider good. In fact, "Walks well on a leash" is inaccurate; "Drags you around to where she wants to go" is more appropriate. And while I sat in the living room and consoled Ruth, because clearly she adores this dog and is only releasing her because of the deal she made with Mr. Ruth, Mr. Slave Driver spent time out in the yard with the pup and Ruth's daughters, whom he pimped for information.

Thus he found out the following:

She eats everything. Everything.

She steals food off of the counters/plates/anything she can reach.

If there is a hole, she will exit through it and run off.

They told us that the dog occasionally likes to dig, but Mr. Slave Driver observed that the dog showed no interest until the children began digging in the sandy area of the yard (the Swimming Pool corner) and the dog followed suit. So he believes it is a child instigated behavior, along with her unwillingness to retrieve. She will fetch, but then the kids chase her around, which she finds a barrel of fun, and thus there is no compulsion to return the object to the handler to throw it again.

Both of these issues are easily solved, and The Kid (ours) is a teenager and therefore has no interest in chasing a dog around the yard because, frankly, it’s too much work. She will, however, throw a toy that has been returned.

So we have our work cut out for us over the next year. We're used to well behaved dogs that are trusted to remain in our house while we are absent and not destroy everything they can reach. And we know how to train this behavior into them, because over the years we have had unruly, annoying, destructive animals and have turned them around to be model citizens.

Of course, we will also have to modify our own behavior so as not to set this dog up to fail. We need to:

Keep all the trash cans empty or off of the floor.

Make sure food is pushed waaay back on the counter tops.

Keep a steady hand on the leash.

Never leave an outside door open or unattended.

Put down the lid on the toilet seat.

So, here's to teaching old dogs new tricks, and new dogs old tricks.
Posted by Lisa Deon at 10:58 AM

My former neighbor has had one Great Pyrenees, or another, or a litter or two, in residence her entire life. I have gotten to know two of her dogs: Pearl and Missy. They are wonderful dogs and yes, they are large. The only item I would add to your comments is that GP's are used to making decisions independently, since they are raised to care for their sheep. So...it is little wonder they don't go on a leash all that well. They tend to think they know it all and are a tad bit headstrong! They can have an attitude with a capital A!
Enjoy the puppy! She looks gorgeous!

She looks beautiful. What's her name? Did I miss that? Or does she not have one yet?

I wonder a bit about the 18 yr old. I used to keep a high-energy GSD from working lines in an apartment, but I knew every dog park in the neighborhood and visited them daily.

Met a woman once at a dog park. She'd just gotten an English Mastiff puppy. Those dogs can grow to 250 pounds. The woman drove a Pinto. It only occurred to her after she got the dog that she better start saving up for a new car.

Yes, I do make decisions independently, don't go on a leash at all well, and am headstrong.

But Luna looks far more trainable that I am. And she's a beauty!

Hmmm. Get her a sheep?

My shepherd thinks I am her sheep. She herds me.

Luna is a beautiful name! (Hopefully her middle name is not "C"?)

Merry, I was thinking her middle name would be "Tick."

Congratulations! She is a beautiful, big puppy. And those behavior issues of hers? Well, she sounds like a dog. Both our dogs are rescues and each came with some unusual issues. Our Bella dog eats everything too and is an expert counter surfer. Food of course is always a temptation, so we're pretty good about keeping that out of reach. But she has a particular fondness for taking catalogs, cookbooks & notepads off the counter and shredding them on our deck. We are the neighborhood litterbugs. It's windy here. I even found a sheet from the last notepad in Marley's stall. Enjoy your new girl, challenges and all.

I have had two Great Pyrenees and they were wonderful dogs. That said; the guarding livestock instinct was so strong, Wagner added our neighbor's herd of beef cattle to his "circuit". Never could change his mind and both of us learned to live with it(neighbor was more happy than I-we had a terrible coyote problem and newborn calves are so vulnerable). Lad stayed on our property and had a goat as his buddy on his rounds. The Pyrenees love a vantage point to watch over their territory. Wag's was a window in the barn when hay was piled in front of it; Lad and the goat used the hood of the car!!! I have photos of all of them in their guard posts.