Educating The Equus-Ignorant, One Person At A Time.

"A person is smart. People are dumb, panicky, dangerous animals and you know it."

—The Character of "K" from Men In Black.


Last week I took two photos of Charlie Horse's legs and uploaded them to facebook. This is what they looked like, accompanied by the captions: 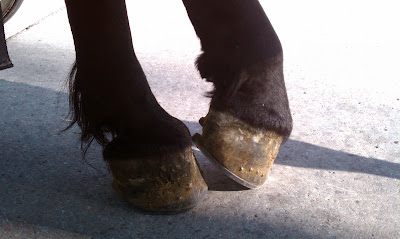 "Ooooh, is your horse's leg broken?" 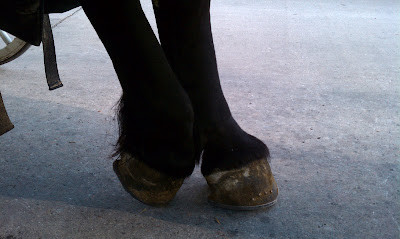 "Yes, see? Now the other one is broken."

I was joking. Mocking people who walk up and tell me that my co-worker has a broken leg. It's amusing at best and irritating at worse. However, it's not nearly as annoying as people who feel compelled to tell me about the episode of Seinfeld where Kramer feeds Rusty the carriage horse Beef-a-Roni. Because really, people, that shit never gets old.

On Saturday evening I noticed a drum-circle type young man skulking around the street side of Kar's carriage. She went around, found him taking cell phone photos of Bart's rear leg, and asked if she could help him. He immediately launched into an angry diatribe about documenting the fact that the poor wretch couldn't even put weight on his leg he was in such bad shape.

Kar stood in front of him, bent one knee and asked, "You mean because he's standing like this?"

(Had it been me I would have added "you dumbass" at the end of the sentence, but Kar is way nicer than I am.)

Then Kar asked him if he just wanted to make assumptions, or would he like to be informed. He actually chose information, and by the time they were done conversing, he came away with a new understanding of equine physiology. 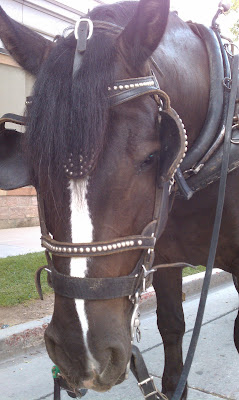 Kar was also admonished to "Free your horse, you bitch!" while walking Bart on Main Street, which would be a little awkward being that we're smack dab in the middle of downtown.

progressive. (If you can call PETA numbnuts progressive. Implies a certain level of intelligence....)

I personally loved it when I would drive the team (Jim and Bob or Jim and Charlie) and they would cross their legs.

Bart can come over to my house and quit being annoyed by cellphone cameras ASAP.

I don't even know how many times people had issues with the horses that I drove resting their legs. I loved it when they would rest their legs. It meant that they were not dancing at the gates, causing problems. They are relaxed, waiting to get a ride.

Its right up their with the idiots that think that they are all Clydesdales or Morgans. As someone that has both in their stable, they are VERY different and should never be confused!!!

Ha! I can just picture a herd of draft horses running loose around SLC, terrorizing yappy dogs and eating ladies' hats. The way nature intended. Those poor things - it must be so HARD for them to live in a cushy barn and be fed and fussed over! Shame on all of you! :P

Wow, that broken leg thing is going around...my horse has it too!

Yeah - every time I've broken a bone, I just stand there calmly! Maybe the numnuts just need to experience a broken leg for themselves so they'll be able to recognize the difference.

I'm a carriage driver in St. Augustine, Florida, and as the sometimes-driver of a horse named Rusty I can vouch for the Seinfeld story getting ridiculously old.