I found out this week that I will not be working Gardner Village this October. Did they call and say, "Thanks for doing the witch thing for us but we're going in a different direction this year." No. Did they send us a pink slip to let us know we were no longer of service? No. How did I find out then, you might wonder…

I went on their website and looked on their October Calendar, where it states that "Ride to a Witch" will take place select weekends from Oct. 1—31, and you ride on a restored antique truck… 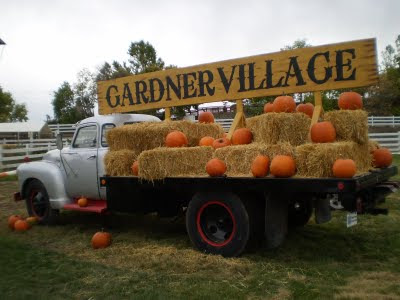 Okay, so that means we're out. Because I don't haul the folks around on the bed of a restored truck (which, by the way, is beautifully restored. And I hope it's mechanically sound. Because we kept two tractors out there, just in case one broke down, and two flatbed trailers, for the same reason. At one point last year Hard Rock had to run to a tire store and buy a new one because he got a flat and the tire shredded. So if their truck breaks down, they're f*cked. Because for $5, nobody's gonna "Walk to a Witch.")

I'll miss Gardner Village. It was an easy yet lucrative gig; it was eight minutes from my house, and I was home and in bed by 10 O'clock. Plus I got to work with Ro, which is always fun.

Okay, onto the "real" blog.

Last week carriage driver Kar and I were standing around shooting the breeze, trying to look busy when she suddenly said, "Guy in a skirt."

I, being my usual intelligent and observant self replied, "Huh?"

Kar pointed down the sidewalk and repeated, "Guy.in.a.skirt."

So I squinted, and tilted my head sideways and finally saw him waaaaay down the block. 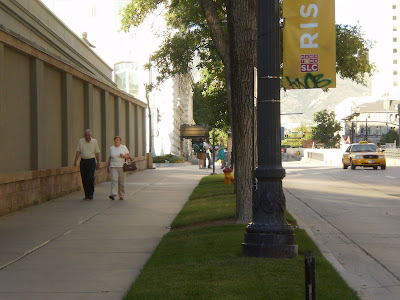 Now, being me, I grabbed my camera and tried to get a photo but of course he was so far away it was difficult to make him out. So I left my camera on my carriage within grabbing distance and waited. Eventually he arrived at our location and instead of giving us a "WTF are you looking at me for" look he walked right up, introduced himself, and asked us if we would be willing to write down our idea of "The American Dream."

So I ignored that and right away asked if I could take his picture. 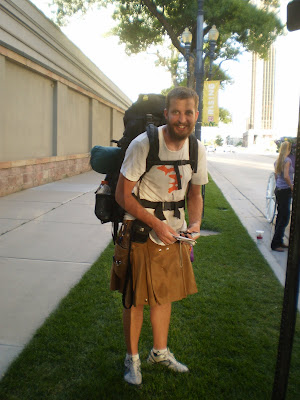 He actually has okay posture, he's just all hunched over like that because of the backpack. Turns out his name is Aaron Heideman and he's travelling the lower 48 states, asking people to record for him their version is of the American Dream. Yes, citizens, he's a writer. Now, back to the skirt. It's not often we see men wearing what is traditionally considered women's apparel. And when we do, they usually have their arms wrapped around a set of bagpipes, which indicates that they are not in fact in a skirt but are wearing a kilt which is different. Plus if you call it a skirt they will beat you senseless with their bagpipes. Anyway, what Aaron is wearing is not a kilt, nor it it exactly a skirt, it's a utilikilt. And he says it is very comfortable and good to travel in.

Imagine if Carhartt made cargo skirts in that ugly Carhartt tan, for men. Now imagine if all the construction workers started wearing them. Now imagine they all have to climb ladders, and ask you to hold the ladders for them.

Anyway, you can read all about Aaron's exploits at
American Dream Or Bust
Posted by Lisa Deon at 4:11 PM

Love the utilikilt... but a very cool mission he is on. You meet the most interesting people Aunt Lisa.

He has cute legs. I would take his picture as well.
My real gripe...what do you mean no Gardner Village this year. This is not acceptable, I shall write my congressman and, though he does nothing, I'll whine anyway.

It's not a skirt!!! ;) Thanks for the mention on your blog. It was nice to meet you! -Aaron