Last April Ro got a call from Christus St Joseph Villa, a senior living center in Salt Lake City. August of 2009 we hauled Charlie Horse and a carriage over and worked their Pirate themed Family Day. We had a blast. Prior to last year, "The Boys", also known as Hardrock and Coco, were the employees responsible for this job and they approached it with their normal laissez-faire attitude. In other words, they never dressed up for the part. But because Ro and I did, the lady in charge of the event fell in love with us.

Anyway, last April Ro got the call, "Would the carriage company please reserve August 21 for St Jo and could Ro and Slave Driver be the employees who work the event?" Because the Pirate theme was so popular last year that they were thinking that they'd do it again, but only if Ro and I were coming, otherwise they'd go with a different theme.

Thank god, because if it'd been a Luau, our choice of costume would have been a 'Hula Girl' or the 'Roasting Pig'. Neither of us can pull off 'Hula Girl', at least not without making everyone sick.

Well, Ro responded, "Hell YES we'd be there!" And then she called and had me circle the date in big red marker in my appointment book. And then she reminded me several times over the course of the summer. And when I signed up to work on that night because I forgot she erased my name and reminded me again that we were doing what we lovingly call "The Pirate Gig."

This year St Jo had a surprise waiting for us, a big ass Pirate Ship stationed at the entrance… Charlie is just about the most "street broke" horse you'd ever see, but I still asked Ro to jump down and walk next to him while we passed it. Charlie has to work with frail and old, and getting him jacked up right before we stick frail and old into the carriage is not a great idea. But he passed it with only a glance, and was his usual funny yet professional self.

Some of the residents don't want to ride, but they do want to see Charlie.(Obviously, Ro and I play second fiddle to Charlie. Just like downtown, nobody gives a crap about the driver, it's all about the horse…) So, their assistants will wheel them right up under his nose. Charlie is great with both kids and people in wheelchairs. The chair doesn’t bother him a bit, and he drops his head so they can cuddle with him. We have horses at South Gate who, if given the opportunity, will use a human as a scratching post, rubbing their big head all over them. But Charlie never does that, which is good, because a horse can head toss a child like a Hacky-sack.

We integrated a few new features to both Charlie and the carriage this year. On the carriage, we added a big flag complete with wire so it's continuously waving (thank you, MBA, for the suggestion) and little flags on the back. The parrot we got for Ro ended up on the carriage dash, as it wouldn't exactly sit on her shoulder without looking like a prop in a Monty Python sketch.

I added a beard and moustache to my costume, to enhance the air of scallywaggery to my pirate carriage pilot character, and Charlie got a hat with a red plume and a colorful little hair extension with carrots on the end. Sorry, but pony beads in a horse's mane is too much of a pun.

Anyway, I know the real reason you tuned in is to see the photos. So here they are: 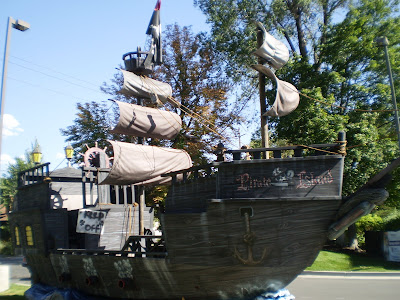 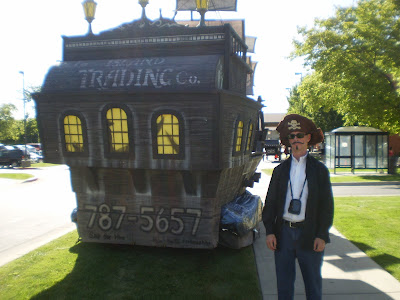 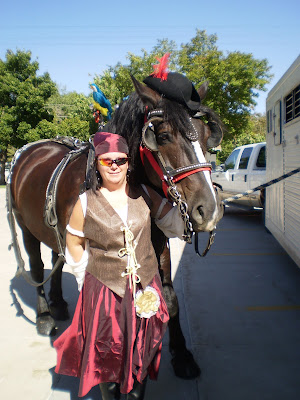 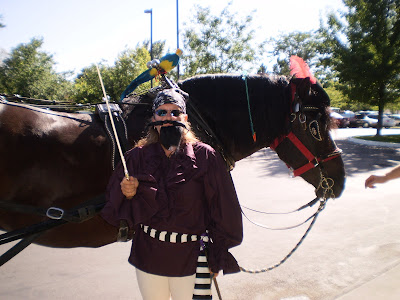 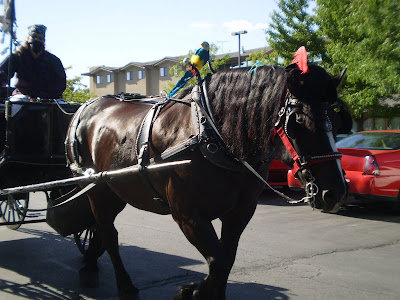 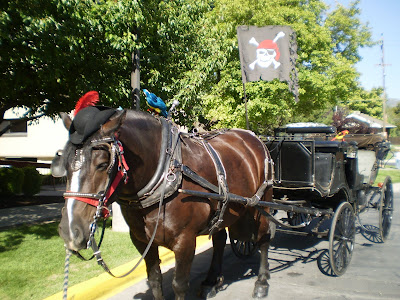 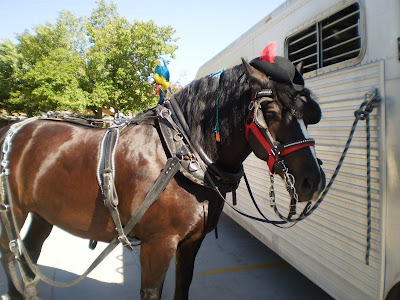 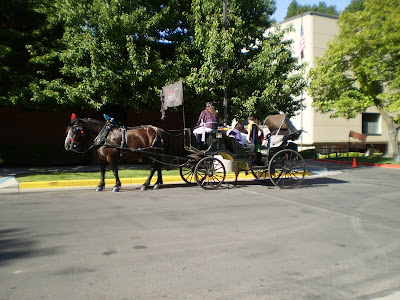 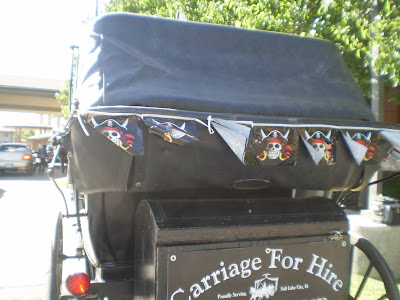 That horse is a saint! I love how some of them just seem to "know" there is something different going on and that they should be careful with people who aren't as steady.

Slave driver "in drag", the parrot, Charlie in his hat, the FLYING flag - it is all just so great. Thanks so much for posting the photos - I felt really left out when I forgot to come by and see you during the event - now, not so much! ---MBA

This has to be just about one of the most awesome horse-related things I have EVER seen. :)

Charlie looks awesome in full kit with a parrot on his back! My apologies for maligning the tricob hat in the early photo; I should have known you'd have it pulled together perfectly. (The flag is a GREAT touch.)

I love Charlie in his little hat.