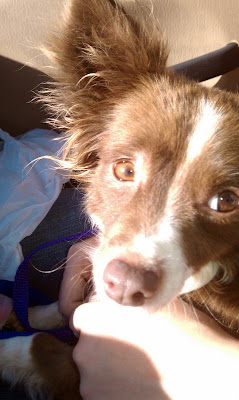 We acquired another dog. She's not the dog we originally went so see, but she's the one we came home with. Mindy is her name, and she wiggled her way into our laps and hearts at the Utah Animal Adoption Center. 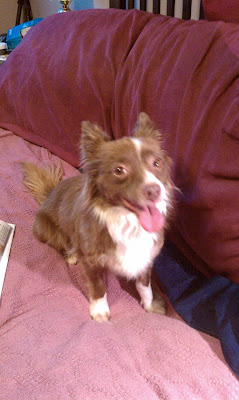 This is a bad photo, she isn't that bug-eyed.

As far as they can tell, because she was a stray not an owner surrender, Mindy is five, and classified as a long haired Chihuahua. I think she's got some Dachshund in her, because she has a v e r y l o n g b o d y. Also, because of her ears, some Papillion, which would make her a Papshundhuahua, which is not only difficult to spell but hard to pronounce when drunk. Whatever her breed, she's been at the Humane Society for six months, arriving on her last day from the pound. In other words, she was sent to the Humane Society before she was to be destroyed, having used up all her allotted time at the county animal shelter.

Right now we are in the "getting to know you" process. She's a little thing, but both vocal and fast. So far she's exhibiting signs of separation anxiety and hoarding. Plus she's aggressive towards Luna, who just wants her to play the "Chase me!" game. We know it'll take time; it's not like we haven't been through this before.

Mindy had a heartbreaking way of working her head between the crook of your elbow and your chest. She is content to simply push her weight, all 10 pounds or so of her, up against you and cling like Velcro. She doesn't squirm, dig or paw, she just rests, as if disturbing you might make you go away. Living in a shelter must be a tiring thing, since all she wants to do is sleep. Except when we go for the occasional walk. And her Most Favorite Person is The Kid. 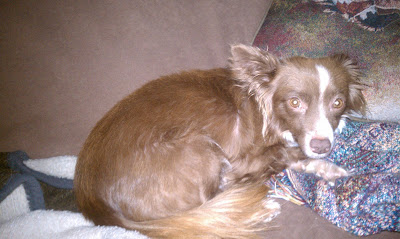 She likes to sleep a lot.

Luna, adopted on April 1st, has turned into a model citizen. Of course, making sure she cannot get into trouble has helped exponentially. She no longer has an all access pass to the backyard via the dog door, as anything left around made its way out there. For a while the lawn looked like we decorated with shredded newspapers, dissected flip-flops, and discarded pool filters.

One night, Mr. SD and I were walking her when the neighbor's Pit Bull, usually in a high fenced yard with a "Beware of Dog" sign on the gate, charged across the street at us. Mr. SD ordered Luna to "SIT!" which she did, and I used the Aggressive Dogs in Memory Grove trick, saying in a rough gravelly voice, "NO! BAD DOG! GO HOME!" The dog did retreat a bit, but turning it charged me again, teeth bared, all business. I repeated the "GO Home!" command and it did finally returned to its yard. 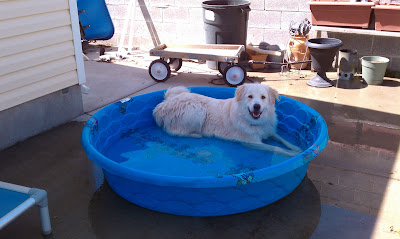 After returning to our house we witnessed this dog charge another family on an evening dog walk, and with the help of another neighbor got the aggressive animal back in the yard and the gate secured. Mr. SD was pleased with Luna's reserve, but also stated that if the Pit had come after me he would have released Luna to defend me. I was thankful that we didn't have Mindy with us, because that would have been a chaotic mêlée of epic proportions. 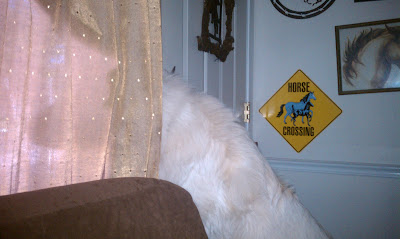 Luna likes to keep an eye on things going on out front.


Anyway, our inventory is back to "Main dog and Auxiliary dog."

In other news of interest, my submission of the first 25 pages of my novel, The Carriage Trade, finaled in the Utah RWA's Heart of the West contest, and will go on to be judged by a literary agent out of San Francisco. I won’t find out how I placed until October 9, 2010, but it's a win anyway, because an agent is looking at it, and I didn’t have to write a query letter or a synopsis.
Posted by Lisa Deon at 7:04 PM

Mindy is adorable and Luna sounds a lot like our Bella. Everything ends up outside on the deck and she litters our back yard with paper shreds.

Oh SD, Mindy is adorable!! And after spending six months in a shelter it's no wonder she's a bit scared/ shy/ wants her own stuff/ wants to be with you/ is in desparate need of sleep.

All of my dogs are rescue dogs and it took a while for each of them to settle in.

Congrats on your win and agent contact!! We will be waiting to hear what happens!

Awww, puppies. Cute puppies. Good Luna! And lucky Mindy that she found her way to be part of your family.

Think the neighbor and his pit need to be reported to animal control. What if you had been a little kid? Dog being out and able to attack is not responsible pet ownership in this case, and could have resulted in something very serious (or even fatal.)

Anon, another neighbor has already made Animal Control aware of the problem.

SD - It's been my experience with animal control that the more people who complain about an animal's bad behavior, the more likely it is that they will respond in a timely manner - rather than not responding at all...

LOL Luna in her pool, what a cute pic. That's funny you mention the sleeping thing. Nuzzling Muzzles just adopted a dog too and she said the same thing, he has been sleeping a lot. I'm sure it is tiring having your life be a big question mark and not knowing what will happen or where you will go next.

I'm now at a year with my "puppy mill" dog. So happy for Mindy, and we'll have to compare socialization stories on our dogs!

BTW, you wrote: "For a while the lawn looked like we decorated with shredded newspapers, dissected flip-flops, and discarded pool filters."
You mean that's not normal lawn decor? ;)

That is normal lawn decor at my house! Very cute dog, and she will adjust just fine I'm sure. Luna is gorgeous and very good girl for "Sit" while another dog charged.

I imagine she's napping because she actually CAN, no BARK BARK BARK all day echoing around her. Peace and quiet, time for adjusting to her new life. She looks very sweet.