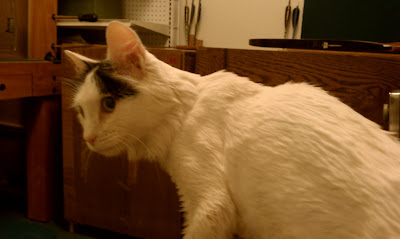 On Sunday The Kid and I stopped by the Super Adoption event hosted by No More Homeless Pets in Utah and PetSmart. They have this event twice a year, filling the PetSmart parking lot with huge tents full of pens and cages. The idea is to get as many of the local rescues and shelters together to showcase the pets they have for adoption all in one central location.

I have to admit that I had toyed with the idea of getting one more dog, but after seeing the dynamic currently going on in the house, with Luna and Mindy getting along well, I decided that bringing another dog in right now would be too soon. Mindy just last week realized that she was here to stay, not just a guest. The turnaround came after we took her with us to a bar-b-que at a neighbor's house, where everyone brought their dogs. Luna ran around like, well, a lunatic, playing and chasing while Mindy hung back, shyly, eventually going from person to person, making friends. She wasn't allowed to make friends with any of the dogs; Luna, in protection mode, growled at any of the canines that got close enough for a butt sniff. It was just as well, since Mindy was the tiniest dog there and might have gotten trampled in the raucous fray anyhow. When we returned home, her entire attitude changed. We'd brought her to a place full of other dogs, and then we'd brought her back home. She pranced, she bounced, she displayed an attitude of happiness, joy and self confidence she hadn't before. So I'm okay with the status quo.

But I did want to foster a cat. Not adopt a cat. Foster. Which I think several of the people who know me in real life were a bit shocked by. I'm not a big fan of children; I love my own child. I don’t want to hold your baby, or watch your toddler, or even hear funny stories about what you kid did with a booger. I often say, "I like other people's children as much as I like other people's cats." But you have to understand that at one point in my life I had not one cat but two. Tigger and Sparkles were barn cats we had when we owned our farm in Missouri. And when we moved, knowing we were going from a rural area where the cats had the freedom to roam, explore and hunt, trying to turn them into house cats just wasn't going to work. So the woman who purchased one of our horses, Nightmare, for a Hippotherapy program, also took both cats. It allowed the felines to stay in an environment they were familiar with, a stable, and do what they loved to do, hunt. So, just as I love my own kid, I loved my own cats. Enough to give them up for a life they would enjoy.

So when the call came out via Facebook that NMHPIU would need foster homes for both dogs and cats after the Super Adoption event, I answered. After all, I have platforms available to me (my blog, Twitter, MySpace and Facebook) that enable me to promote a specific animal for adoption, which I know the fine folks at shelters are unable to devote time to, due to their quantity of animals. Plus I have room for a cat; literally. I have a bedroom in the basement which is used for storage. There is enough area for a cat to climb and explore, yet also have seclusion if they want. The cat will slowly be integrated into the dog domain, so as not to traumatize her further. And hopefully, someone will see her profile and decide to give her a forever home.

So may I introduce to you Wednesday. If you are looking for a sweet cat that needs a home, please consider adopting her.
Posted by Lisa Deon at 9:18 AM

Checked with Princess, Joe and Toby. The answer was a mutual and resounding "NO WAY!!!!" Actually, Toby would probably do just fine with another cat, but at 13 years of age, the two cats want no more new competition, no way, no how.
---MBA

You know, I've only actually seen one of your cats, so saying that your invisible cat is not wanting another cat is essentially saying that you are in denial.

Really you need two cats that are visible. Imaginary cats do not count.

Wednesday is beautiful. I hope she finds that perfect home that will brush her and not be offended by shedding. Good Grief! People shed too. Do we give up our kids for adoption when they clog the shower drain with hair. Good of you to foster this sweet kitty. I'm working on a foster situation of my own and can't wait to bring my foster critter home soon; hopefully this weekend.

I think she and my parrots may not be the right fit! Kudos to you..and I hope you find her a great home. Or keep her yourself. :)

Looks like this kitten’s picked you. It looks like it would fit in beautifully with your family. I think you would be amiss not to keep it yourself. I thought about it, but I have a senior cat (16) and I decided not to traumatize her by bringing home competition at this stage in her life. Like the prior post said...an imaginary cat does not count, so keeping this one would be a plus in the energy scheme on the home front.

I'm fostering a cat because I figured that allowing a cat to live in our house (as opposed to a cage in the PetSmart or a cat room at a shelter) would allow a cat to be in a little more stable enviroment. I'm fostering a cat because I knew if I fostered a cat I would not become as attached to it as I would a dog. And once this cat finds her forever home, I can help another cat out while it's waiting for a forever home.

Plus, Wednesday doesn't get along with our dogs. At.All.