Does This Carriage Ride Make My Butt Look Big? 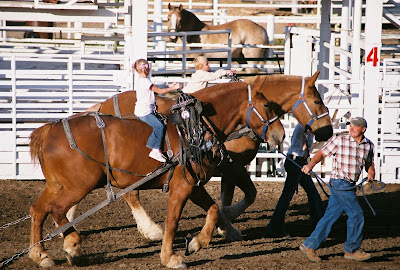 The Grandkids riding out on one of the teams. This sport is a family affair.

When I'm at work sometimes a customer will jokingly ask if they or their party of passengers are too heavy for the horse. It's one of the stupid rants that the RARA's use in their Litany of Lies: That the carriage and passengers are "too heavy for the horse to pull." I explain to people, "The carriage weighs about four hundred pounds and is balanced on the four wheels. This makes it 'rolling weight.' At about a *buck-fifty, I pull the carriage in and out of the storage barn. The average horse can pull at least twice his own weight, and that's dead weight, not rolling weight. We limit our passengers to four adults and two small children (as opposed to four adults and two children who look like they just ate two small children.) So for a horse like Tony, who was once a competitive puller and weighs in at around 1800 pounds (at a conservative estimate) the max weight he could pull would be around 3600 pounds. Subtract the weight of the carriage and driver, and divide the balance by six, that would give a cushion of 500 pounds per customer. At which point, by the way, the wheels would probably come off. So are you too heavy? Not unless there's something you're not telling me…Like you're wearing lead underpants and have pockets stuffed full of Plutonium. Otherwise, we're good. 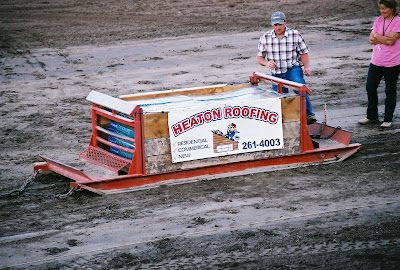 We went to the Draft Horse Pulls at the Utah State Fair last week. To those of you who have never been to a horse show where they have "Speed Events" (Pole Bending, Keyhole Race, Barrels, etc) speed horses love love love what they do. They get cranked up at the gate even before they break the laser beam timer thingy. The same thing happens with these competitive draft horses. They are trained to pull when they hear the hook hit the metal, and if the "Hookers" (the guys holding onto the doubletree that the hook gets hitched to) don't get the heck out of the way they'll end up with smashed ankles. Because when it's time to go, this team juggernaut goes!

They started with the "Lightweight Division" and MBA fell in love with a Shire team named Briggs and Stratton. 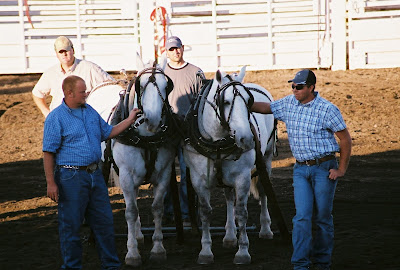 Briggs and Stratton, waiting for their turn. 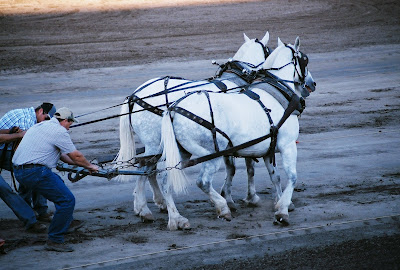 They were the first team out of the competition, but they win in our book for Best Looking Boys. The "boat" or sled, which you'll notice is NOT balanced on four wheels and is in arena sand, weighs 4000 pounds empty (which everyone pulled quite easily) while none of the teams (light, medium or heavy weight) exceeded 5000 pounds in their combined weight. 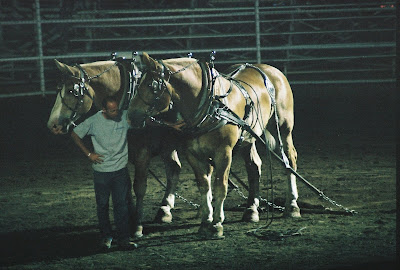 Everybody is watching the action. 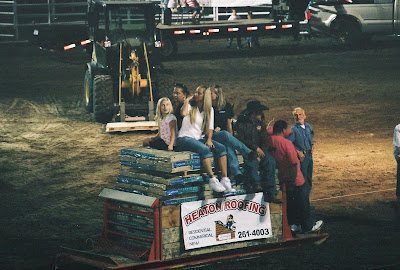 So the winning team was less than 5000 pounds and pulled dead weight of 11,600. So are you, your husband, your teenage twins, change-of-life toddler and Goldendoodle "Fritzie" too heavy for a ride? 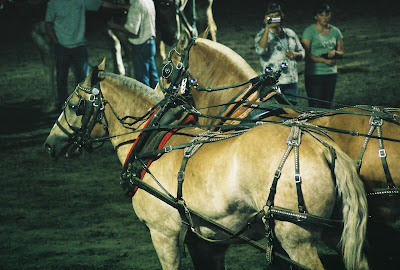 A team of the "Big Boys" 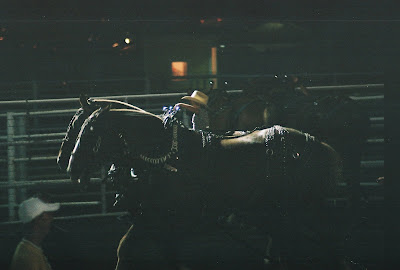 This was the Heavy Weight winner's Victory Lap, complete with grandson riding the horse.

* I weigh about 150 pounds, not counting my lead underpants.
Posted by Lisa Deon at 8:19 AM

Sad I missed the pulling...

I've never been to an actual pull before... I haven't really generally lived in towns big enough for a real fair. I'm looking forward to my first Utah State Fair though... I don't think I even went as a kid.