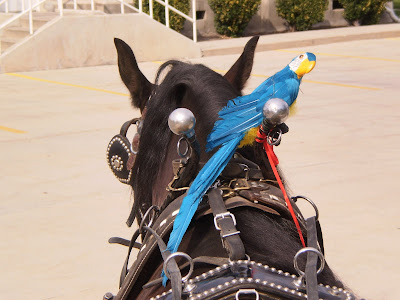 I be workin' in the wheelhouse when Wench Ro hailed me on the squawk box and be inquiring if I be available to do some plundering on Saturday at the Elderly Scallywags Lair.

I was sitting around doing nothing when my boss Ro called and asked me if I could help her do a specialty at the Christus St. Joesph Villa Senior Center.

I be considering attending a conclave fer the Sundance Slaves but parlayed that I could work it into me agenda.

I was invited to a Sundance Volunteer party but would be able to squeeze it into my schedule.

Wench Ro swabbed the decks of the dingy, pressed ganged Black Hearted Charlie into service and sailed the high seas to the Scallywags Lair. 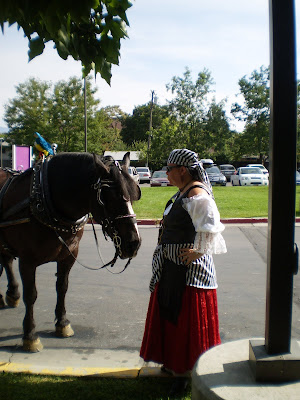 Ro loaded the carriage into the trailer and we got Charlie Horse out, tacked him up, loaded him and headed out.

The tradewinds be not fair sailing for the schooner so we did a bit of rowing to speed up the knots in the shipping lanes, and with no leaks or beaching we finally arrived into port.

The truck is a p.o.s. and I thought we were going to have to get out and push it up the onramp for I-15 but eventually we made it…never going over 45mph on the highway which made the folks driving behind us very happy…

We arrived at the Elder's fort and low and behold! The scallywag landlubbers kept a-boardin' us over and over, but they never managed to overpower our fiery crew; Black Hearted Charlie gave no quarter, Wench Ro was in charge of loadin' the cannons, and I, the Dread Pirate Roberts, was on the poop deck, observing the battle and takin' no prisoners! 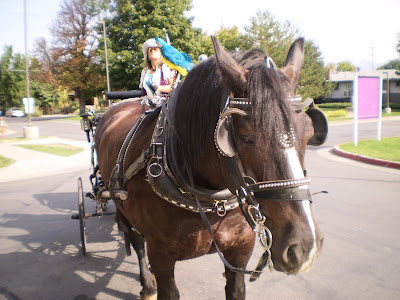 The gig was driving the seniors around the parking lot. It was their annual family day and had a pirate theme. Charlie chugged around for ninety minutes, and was absolutely fabulous when people were rolled up to his face in wheelchairs to say "Hi"; he stood rock still ( with Ro's help) as some of the less mobile residents needed assistance in and out of the carriage. 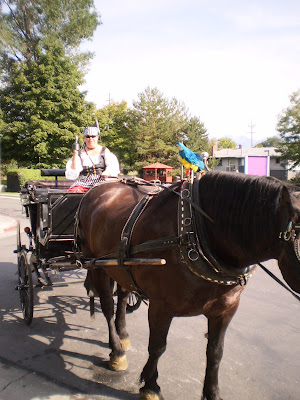 Finally, with the bloody sunset the battle came to an end, both sides calling it a draw. We loaded up our ship, hoisted the skull and crossbones, and sailed for our secret pirate cave, vowing to return next year with more dangerous men and ammo, and take the treasure for ourselves! Argh!!! 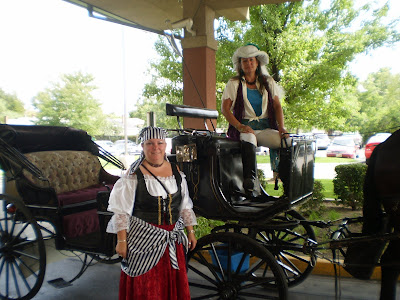 The people in charge were thrilled that we dressed up and want to make sure that Ro and I come back next year for the Luau theme, when, even though he's a gelding, we will make sure that Charlie Horse get's lei'd.
Posted by Lisa Deon at 5:03 PM

New website freestuff4animals.com to help animals and animal owners. If an animal owner has an item they are not using, they can post it on the website for no charge. To get or trade an animal item there is an annual fee of $4.95 of which $1.00 will go to animal rescues.

Superb. What a joy to read.

Sorry we missed you during your recent stay in Chicago.

Great post as always. Give Charlie a kiss because he did a good deed. Now that I think of it, I'm a little surprised that none of the hostages, er, residents, didn't try to make a break for it, reclaim their freedom, see if they could make it to Harriet Tubman's house or some thing or other. Welcome Home! Dusty

Parrot on the hames FTW!

Word Verification: Pubra...I'm drunk and I don't even wanna imagine...

Those type of specialties are pretty cool. I am a little jealous.

Are you kidding, BPA? I adore those kind of specialties. The ones where you do a wedding or some other boring crap that you could do downtown and it's only a "specialty" because you have to haul the horse/carriage there are bleh! I love the weird stuff. It's fun.
(DO NOT TELL RO but I'd do those for free...)

And Stacey, I have to give credit where it's due. I was gonna put the parrot on my shoulder, but Carriage Driver Karleen suggested I attatch it to Charlie's shoulder, and a legend was born...