I love gadgets. I get that from my dad. He loved gadgets with a passion that was only surpassed by his affection for watching TV. And if you combined Television with gadgets, he was in Heaven. While other families had to make do with watching a show and then using their brains to remember things about it, we had a VCR. Less fortunate families were stuck cooking with something as archaic as fire. We had a microwave. And I cannot even recall the amount of remote controllers we cycled through in a decade.

So you can imagine my bitter disappointment as an adult that all the things my generation was promised back in the 60's (cities springing up on the moon where we live in big oxygen filled domes; self cleaning houses, flying cars and personal robots to do all the drudge work; a cure for the common cold, etc) have not yet come to fruition. The closest thing we have to a self cleaning house and robots, besides hoards of illegal immigrants doing menial work for low pay and no benefits, is the Roomba

robotic vacuum. And the only reason why I have not run right out and bought one is I'm sure the dog hair in my house would kill it pretty damn quick. If I did get a Roomba I'd also have to get a little monkey to pluck the gobs of hair out of it every ten minutes, and monkeys, according to Mr. Slave Driver, make nasty pets. The pet monkey he knew sat on top of his friend's television, masturbated, and flung crap at house guests.

If I want to see that, I'll watch MTV.

Okay, back to the topic of gadgets: Besides having a Kindle, which is a high tech reading device, I recently purchased a low tech reading device called a Book Hugger. My friend and fellow writer Clancy Metzger and I saw this demonstrated by the inventor, Paul, 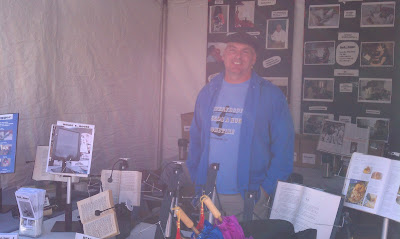 at the
Tucson Festival of Books and decided it was a "Must Have."

Clancy and I both purchased Book Huggers, because we liked the idea of having something else hold our books for us. In my case it's because, as everyone should have figured out by now, I'm really lazy. And I like to read while I eat. Sometimes propping a book up across the TV remote or using the remote to keep the book open to the pages I'm reading (both low tech uses for a high tech object, essentially using a remote as a rock) doesn’t work out so well. Plus then Mr. Slave Driver, who likes to watch TV while he eats, cannot randomly change channels every 2.3 seconds. Because I'm using the remote for a purpose it was not designed for.

What this device does is hold your book, making reading almost hands free. 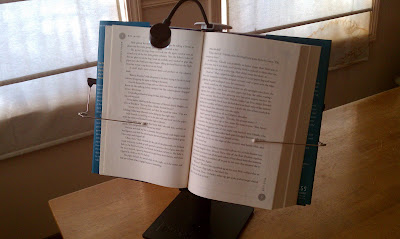 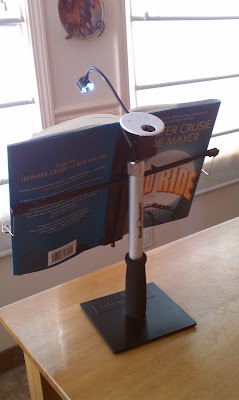 When I initially showed my people the Book Hugger they mocked me and said soon I'd develop tiny, useless Tyrannosaurus Rex arms, good for not much more than wobbling around, scaring off crows in a cornfield. 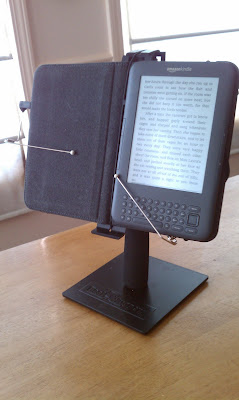 But then I showed them how you can prop it on its side and read in bed and they were impressed. Plus it has a light, and extends. Eventually they became sullen and wished I'd bought one for them, since I was on an out of town trip and am expected to bring gifts upon my return.


I really like this product, and not in a Facebook "Like" way, which only gives you the one option. It's a useful tool. You still have to turn the pages, unless you own a monkey, in which case you can train your monkey to turn the pages for you. That is, when he's not pleasuring himself with the zeal of Charlie Sheen or flinging crap at people from atop your television set.

Book Hugger. Get one. And the light. Buy one of those too.

*Do not get a monkey.

On another note, I only need to sell 1,096,632 more copies of my short story, Splitting The Difference

, in order to buy that $329,000.00 RV I covet. And only another seven copies to get paid! So tell your friends, it's available through Amazon.com.

*Monkey option not available through Hugabook.com
Posted by Lisa Deon at 12:03 PM

Ohhhh. I want one. Except the whole page turning thing looks complicated. (Move little bar, turn page, tuck page under other little bar. Too much effort.) And how would this look popping up on the table at my local diner as I read and nosh? I get enough stares as is. Hmmm. More contemplation needed.

@Cary, you don't move the bar, the bar had a little bead on the end of it, the page slides under it. Very simple.

Thanks so much for the monkey images. I'll skip lunch and be better for it.

And I bought the damned book. I'd tried to find it before, but I didn't realize you'd used a different name and I couldn't remember the title.

Anything to help a hooker get paid--I mean a whore-I mean a hard working writer. *wipes brow*

@Lesli, yes, I have to write fiction under another name since there is a famous English medium using my name.

Thanks for assisting me in gleaning a paycheck. :) I will do the same for you. And please write an Amazon review when you have finished reading it.

Nice! Love the post. Made me smile and laugh :)

I haven't done my review yet on my BookHugger, but will soon.

Thanks for the reminder - I need to go review your story.

Hey, Clancy, I'll add you to my blogroll.

A man was sentenced to 12 years chanel bags in prison rather boring. One day he found an ant actually understand him,They begin Chanel Handbags to train it. A few years later, the ant will Chanel Wallets not only inverted, but also Chanel Barrette tumble,That he was quite proud of. At last he was Chanel Belts released from prison,The first thing is Chanel Boots to run the bar, ready to show off his magic bird ant.He Chanel Bracelets told the bartender ordered a glass of beer, and Chanel Bracelets then the ants come out of his pocket on Chanel Brooch the table,The bartender Chanel Earrings says: "Look at the ant ......"That bartender over, one Chanel Hats will immediately shot dead ants,Then Chanel Jewelry I am sorry to say to
Chanel Necklaces him: "I'm sorry, I'll give you for a cup of Chanel Pendant the new!"