There is some stuff going on at another blog, and it looks like a revolt is planned because someone hasn’t posted in a while, so I figured I’d better get on the stick and write something or else it would get all “Lord of the Flies” over here, and that could get messy. All three of my readers might start sending me spam, and I just don’t have enough room in my recycle bin for that.

Since *B* decided he was going to blog about tipping (Still waiting,*B*) I’ve decided to chat about The Proposal

We get a lot of those in the Carriage trade. It’s a romantic gesture, for sure, doing it on a carriage. Of course we also have people do it on a carriage, but that’s a letter for Penthouse Forum, so we won’t be discussing that it here.


This is a picture of my carriage, number 2. 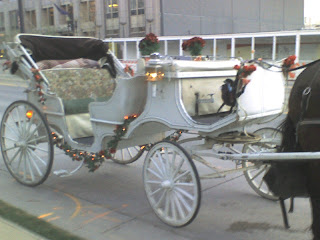 I’ve been driving carriage for 4 years now, and in that time I have had at least 50 proposals on my shift. None of them were for me, of course; that dog quit hunting years ago. Most of the time it’s cute when it happens. I’ve included some of my more memorable ones.

My first time was a quickie. They remained in the carriage and he popped the question in the passenger compartment. I got all teary eyed because I was a newbie, and she said, “Yes.” A “Yes” is good. At least with a “Yes” there is a chance you’ll get a tip. I’ve never had a “No” but I understand from those that have had one that everyone gets stiffed. You, him, her. Much unhappiness abounds.

Once a young man got down on his knee in front of us (me, the intended, and the horse) at south gate where we stage (line up to give rides). Dropped down right there on the curb. He jumped the gun a little; In my humble opinion should really wait until you are actually on the carriage, but since she appeared to be about eight months pregnant I guess he figured he’d waited long enough. I was happy she didn’t go into labor on the ride. Messes up the upholstery.


This is a picture of Charlie and my carriage. He is one of my favorite co-workers. 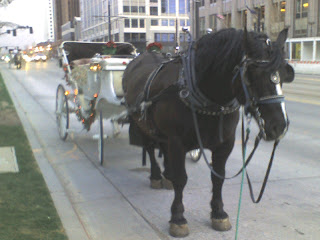 Ro called me in to do a day ride once. I picked up the intended in front of the Joseph Smith Memorial Building. She had just dined with her soon-to-be Mother in law. The MiL whipped a laptop out of her bag, punched up a Power Point program, and sent the intended down the road with me to a 25 minute Infomercial. I must give the groom-to-be snaps for that; The Infomercial had music, video, voice over and stills all wrapped into a “This is why you should marry me” sales pitch that would have made Ron Popeil giddy.


By the time we arrived in Memory Grove she was balling. I was verchempht. I think the horse swiped his eyes but I wasn’t sure and knowing Tony he wouldn’t admit it anyway.

Another time Ro gave me a map. The pop-er had planned a proposal as elaborate as “Spamalot”, but without any musical numbers. I picked up six women at The Lion House, and at specific spots (each was marked with a red x on the map) I was to stop. One by one the women in the carriage would say, “Oh look, there’s my Prince.” A man would step up to the carriage, help his damsel out, and hand the pop-ee two red roses.


This went on all the way around Temple Square until we reached State Street, where we would be in front of the Temple. That’s where her Prince was waiting with the balance of the roses. I thought he was going to get in the carriage and do it, but he helped her out and they walked away.

I picked up an older couple at The Little America Hotel. He had a guitar, sang her a couple of love songs, then proposed after we hit Memory Grove. I liked that one. It was like dinner and a show!

The industry standard here in Salt Lake is to do it in Memory Grove at Proposal Bridge. A very traditional type of proposal, and we have developed a patter for it. If we know what’s going to happen (many times we are clued in advance) we will stop by the bridge, turn to the passengers and say “You know, Sir, it’s such a beautiful evening, would you and your date like to walk around in the park for a minute? I have to go up here (to the turn around) and there’s really not much to see. I’ll be back in a few minutes.” That’s his cue to get out. Yes, sometimes you have to nudge them. Many times we have to remind them to breath! I gave this speech one afternoon during a monsoon. Luckily I had an umbrella for them. I think she knew anyway. She did a double sukahara getting out. Stuck the landing, too. I gave her an 8.6. The horse gave her a 7. He can be a little stingy.

Look! You're syndicated. I left you a comment on your myspace blog. Evidently I have called myself Grizzly over there. Being Schizo takes a better memory than I have. I thought for sure I had become Cozy Armchair. Anyway, great post. I looked at Arghink, where I had not been for some time. Someone took a slap at Scope Dope, who is one of the original Cherry Bombs and a dear soul. So, yeah, Lord of the Flies. Hope Jenny is okay. No one is complaining of a funny smell coming from her back porch or anything, right?