Getting to the bottom of it all

I have a disease. A disorder. Maybe you could call it a medical condition, I don’t know. It’s called Packrat-it is. Some would refer to it as just being lazy; that’s okay, I can take it. But whatever name you want to nail it down with it comes to this: Instead of putting shit away where it’s supposed to go, I pile it up on other stuff.

This creates a bit of a problem, like arsenic building up in your body. Eventually it starts killing you.

For me, it crescendos into such a chaotic environment that I am unable to function. Instead of going to my office and doing what I should be doing, I look in as I cruise down the hall, feel the bile rising in my throat, and keep on going.

Ah, the perils of a short attention span.

This was the last known address for my desk. It's probably under there, somewhere. The computer monitor lets me know the approximate location. 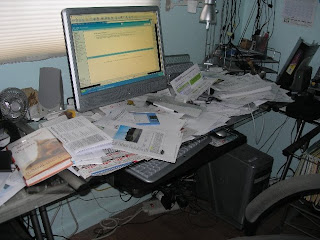 So, since it’s cold and dreary today, with the chances of it staying the same for the next three days, I will clean out and reorganize my office. I have no excuse to go outside and play, and there is only so much shopping I can do at the Wal-Mart. Everyone else is at work or school, so my companion list is down to the dogs, literally, and neither of them seems eager to play, which is weird. Maybe it’s the barometric pressure. Or maybe they too are sick of the way the office looks and are forcing me into a time out.

This the OTHER desk. It's not my real estate, so I don't have to clear it off. 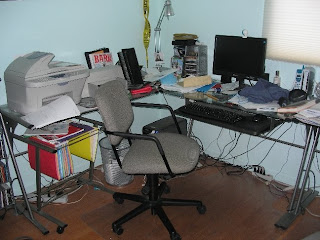 So, dressed in my fatigues, bandolier across my chest, Bowie knife strapped to my calf, trash bag in hand and paper shredder revved up, I’m going in, ready to accept death before dishonor in the war with Officestan.

And do me a favor, if I don’t come back, avenge my death.

This is a futon. I've turned it into a file cabinet. Sort of. 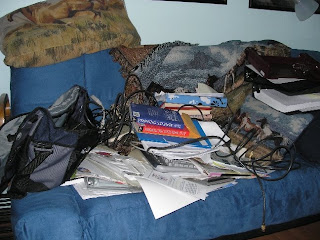 
Okay, I got in, got out and nobody got hurt, mission accomplished! Yay! Clean office. And I’ve the pictures to prove it!


I found the desk! 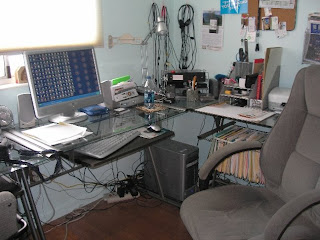 And the other desk is clean too except for the Tick-like teenager stuck to the front of the computer. I tell ya, you spray and spray and you just can't get rid of them! 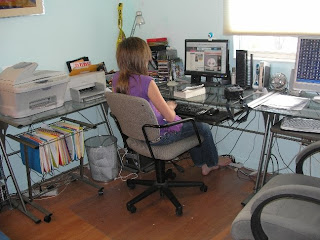 And last but certainly not least, the Futon is clean, which is good, because now I'm gonna take a nap! 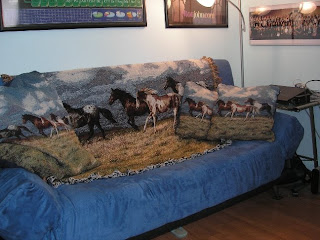