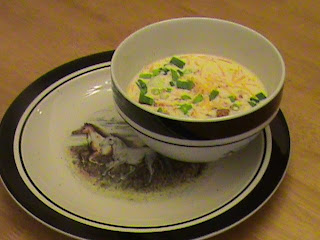 First, bake 6 or so potatoes. Wash them first because you will not be peeling them. Do not wrap in foil, it’s just a waste of perfectly good foil. I’d use Idaho. While baking, play “Private Idaho” by the B52’s. Yes, it is an essential ingredient. It creates ambiance. Plus is drives any pesky teenagers who listen to Bayside right out of the house.

When the potatoes are baked, remove them from the oven. I’d use hot pad or an Ov-Glove, but whatever floats your boat. Allow them time to cool. Give them their space. Remember, if you set a potato free and it comes back to you, it’s 130 calories 0.3 grams of fat and 42grams of carbohydrates that will stick to your ass forever.

Now, if you’re Supermodel thin, and are worried about things like fat, calories and carbs, I suggest you throw all those potatoes you just spent 90 minutes baking out, because the rest of this recipe will make you hurl that corn flake you had for breakfast. This recipe is so loaded with things that are bad for you the food police should be stopping by to confiscate it off your computer screen any second now.

Was that a knock I just heard?

Anyway, let them taters cool. In the mean time, in a large pot, heat up some chicken stock. That’s right, I said chicken. What? You’re a vegetarian? Then go make a salad and leave my omnivorous friends and I alone. Chicken stock should be used in just about anything most people would use water as a base for, like rice. Although I must admit I wouldn’t add it to pancake batter. That would be yucky.

So, a couple cans of chicken stock, add another can of water, and then to this mix add the following:

Finely dice a medium yellow onion, and smash or dice up some garlic cloves (2 or 3, depending on how offensive you’d like you breath to be) and cook them in the chicken stock/water mix on medium for about a half an hour or so. Now add some salt and pepper. How much? However much you want. Does your spouse have high blood pressure and you want to help them go towards the light? Then add a lot, otherwise “Season To Taste.” You can throw the bacon in now for flavor. I don’t actually fry up bacon, drain it let it cool and then dice or crumble it up, I buy Hormel real bacon bits in the salad dressing aisle because I’m an uber-lazy slacker. I also purchase pre-shredded cheddar cheese, those jars of minced garlic and I never make my own chicken stock by boiling the hell out of a chicken carcass. Why? I just freakin’ told you why. Pay attention!!!

So, after about 15-20 minutes of cooking this on medium turn it to a medium-low and add ½ of your already diced green onions. What’s that you say? You didn’t dice them yet? Well you’d better get busy and dice.

Let all of this (which is basically a veggie with bacon soup right now) simmer for a little while, and then do the following:

Carve that ½ brick of Velveeta up into chunks that will melt in a reasonable amount of time on medium/low. You want to be super-lazy and throw the whole thing in? Fine, but it’ll take 4 hours for it to melt, so…we don’t want to burn the cheese because that’s nasty, and we will be using dairy products pretty soon here so we don’t want the heat too high and have them curdle because that’s just gross. Velveeta, BTW, is not considered a dairy product. I don’t think it’s even considered a food product but it is a nice binder/thickener. If you have any left over mashed potatoes in the fridge you can throw them in too. Elmer’s Carpenter’s Glue also works but it’s the wrong shade of orange. Your dinner guests might become suspicious.

So, toss those chunks of Velveeta in, let them melt, and add a ½ to 1 cup of the shredded cheddar cheese. Now, cheddar cheese tends to be a little oily so if you don’t like rich, oily food go get a Fresca and quit making this soup because when you eat it you’ll be able to hear your aorta squeaking closed with each spoonful anyway.

Mmmm, can you smell all that cheese-y onion-y bacon-y goodness? No? Then stir it once in a while.

Okay, remember those potatoes? You know, the ones we cooked for the BAKED POTATO SOUP? Ah, yes, those. Well, now that they’ve cooled you can dice them into bite size chunks. Set aside.

Once your cheese has all melted add the sour cream and the heavy cream. Mix the sour cream in with a whisk until the globs are all gone. Keep the heat low.

Let that simmer on low now for a while longer then add your baked potato chunks. Let the potatoes heat up a bit and VOILA! Serve as follows: dress the soup in the bowl with shredded cheddar, bacon bit and diced green onion. Serve with crusty French bread.

What’s that? I didn’t tell you to buy crusty French bread? What are you, a savage? Even cannibals know to serve bread with their soup. OMG do I have to do everything around here? I tell ya, try to teach a bunch of Neanderthals how to cook soup and then they screw it up by not serving it with French bread. For the love of Pete…
Posted by Lisa Deon at 4:29 PM

You should write a freaking cook book, Driver. I would buy it, for certain sure.

What can you do with oatmeal?
Keep it clean now.

Oatmeal, along with grits, make an excellent spackle for any dent you may have put in dryway whilst banging your head and crying "Why? Why? Why?" a la Nancy Kerrigan after getting her knee whacked.

What I mean to say is "Oatmeal? Bleh."

Cocoa Wheats all the way my friend.

Lisa, I found you! I finally found your card in my wallet from the Sundance party in August.

Hope to see you in January if I do the Sundance thingie again.

This soup was so SO good!! Thank you for bringing it to the Rose and sharing it!!!