Yo ho ho and a bottle of WTF?

September 19: This day in history:

1985: Mexico City was hit by the first of two earthquakes that would devastate the area.
The second earthquake arrived 36 hours later; both would take thousands of lives.

1982: The first Emoticon was used by Scott E. Fahlman of Carnegie Mellon University.
It was this one : - ) . He suggested it be used to indicate a joke, which just proves that Geeks have no sense of humor. You know, when you have to tell them it’s a joke?

1955: Juan Person, the president of Argentine and husband of Evita, the inspiration for a mega-hit Broadway musical, was deposed by a military coup and sent into exile.

1881: President James Garfield would die from a gunshot wound he received from a disgruntled voter twelve weeks earlier. Ouch!

September 19 is also National Talk Like A Pirate Day.

In the four years I have been a carriage driver I’ve done a lot of weddings, many of them routine and forgettable. Most often we are hired to take the newly married bride and groom away from their reception, usually to their hotel. In my carriage I’ve dealt with the young and scared, (“Yes, please drive us around for the entire time you’ve been paid for. Drag it out as long as possible until the last minute when we have to go to our hotel room and figure out what comes next.”)

This is Utah. The only thing they teach in Sex-Ed is abstinence. Members of the LDS church don’t watch ‘R’ rated movies. I’ve had young adults so scared they look green.

Sometimes we take the couple from the wedding to the reception. This doesn’t happen as often, and is mostly for photographic purposes. It makes a nice wedding picture, and you get the bride and groom together before they’re all sweaty from dancing or icky from smearing cake in each others face.

Oh, I’m sorry. Did I say walk the plank? Usually one would call that a metaphor. Not so on Friday, September 19.

I had a trainee on Friday. We call trainees “Monkeys”, as in “A monkey on your back,” and I was happy to have one on that day, if nothing more than to be a witness to the appointment I had.

My monkey and I arrived at the Marriott for our 6:30 appointment. I was advised that it was a wedding, so I wore my Tux jacket, and when we arrived there was a bride and her three attendants standing under the canopy by the stairs. I pulled up and waited, we were a few minutes early. No one waved, no one smiled, no one indicated that they acknowledged me at all, but that’s not unusual. Some people treat us like an ugly cousin. They know were there and why we’ve come, they just don’t want to deal with us. And I understand, weddings are stressful. After a minute or two the bride and her girls went back into the hotel.

“Okay,” I said to my monkey, “maybe they forgot something. Or they feel compelled to check their makeup one more time…Whatever. We’re early.”

So we wait, and wait, and…wait. Finally the doorman gets a call and says, “Your people will be down in a minute.” So we wait, still. I’m scanning the crowd in front of the hotel, looking for a bride when a middle-aged woman and three teenage girls stride up to the carriage.

They are all dressed as Pirates.

The woman looks at me and says, “We’re here, and sorry we’re so late.” I’m just about to say “I’m sorry but I have an appointment.” But not quite knowing what’s happening, instead I ask for the name (on our drivers sheets where we record our rides there is a space for “name” when you have an appointment. We always check to make sure they match because we have had people get in the carriage and say they have an appointment, when in fact they don’t. The appointments are pre-paid, so giving away someone’s pre-paid ride can create a messy situation.)

So she tells me her name, and it matches. With a sweep of my arm I indicate they are to get in. Driving Jerry, my horse-work partner for the evening , out on the street I turn and say “Okay, I gotta ask…”

The woman laughs and says “September 19 is Talk Like A Pirate Day. I’ve already had a traditional wedding. I’m a fun person, and I wanted a fun wedding. So we decided on a ‘Pirate’ theme.”

“Well,” I tell her, “this is my first pirate wedding.” So we go around the block and end up at The Gallavan Center, where I’ve been instructed to go up on the plaza, over the small bridge, make a loop, and drop her and the girls off.

When we arrived, there was a crowd of about fifty guests.

Every one of them was dressed in pirate attire.

And as we dropped off the bride and her attendants to walk the plank, they gave us a hearty “Arggggg” and a wedding experience I will never forget. 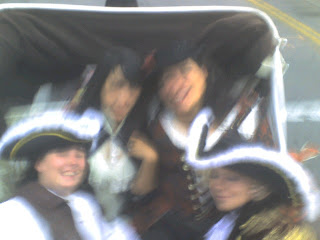 Sorry the quality is so poor, but I was 1) using my phone 2) standing up, turned around backwards and 3) driving a carriage, so , you know, multitasking...
Posted by Lisa Deon at 12:54 PM

Well, you can at least say your job is never boring. Well, on talk like a Pirate day.

Ya know Mel, I will admit that my job is many many things. It's hot, it's cold, it's wet, it's windy. Sometimes it's funny as hell, sometimes the weirdness is indescribable, but it is never, never boring.

Okay, well maybe sometimes, but then we make up stupid magic tricks to entertain ourselves, and then it's fun again.

That is AWESOME! So glad you got a pic to document, even tho its blurry, still viewable! So funny, I bet they had a great time.

They DID have a lot of fun. Later on I thought about crashing the wedding, but since they had fire jugglers I figured better not. Jerry is not a big fan of fire.