And the Oscar goes to...

I awoke this morning to find that my friend and fellow Slave Driver, Stace, had bestowed upon me a prestigious award. 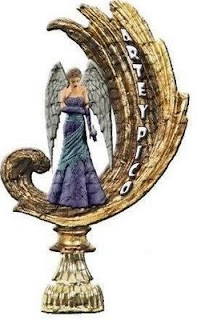 I was surprised by this because I didn't have to fill out any Publisher’s Clearinghouse type form to win it. She just awarded it to me. That was very nice of her, although I don’t think I deserve it. After all, I have, in the past, won numerous awards, some of which I did and some of which I did not deserve. Anyway this award comes with a list of requirements, which I will get to in a minute.

The most recent award I won, not counting the one from Stace, was this: 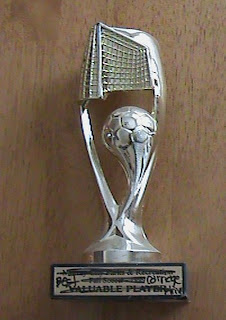 Yes, I know what you’re thinking. “What the hell is that piece of crap?”

I’m going to tell you. Occasionally the youth of Salt Lake get together and roam in packs. One on one dating is frowned upon until such an age as you start looking for your life-mate. So for the 16-19 year old set the approved dating ritual is en mass. Or, as we like to call them, Free-Ranging Teenagers.

Late one fine Saturday afternoon in July several years ago, ~A~ and I were making our way to South Gate to begin our evening shift as Carriage Drivers when, at the corner of South Temple and West Temple, we were stopped by a crowd of the afore mentioned Free Ranging Teens. They asked us to wait for just a moment as they conferred, then one girl stepped up and handed me the above trophy.

“You win!” She said as a cheer went up from the crowd, and my horse danced in place with enthusiasm.

I looked down at the thing she handed me. It was a Soccer trophy with the name scribbled off and “Carriage Driver” written in the margins.

Clearly, they had been to DI and had stocked up on awards and trophies that had been languishing in the “Miscellaneous” section.

I thanked the young lady and ~A~ and I continued to South Gate, where I showed her the honor that had been bestowed upon me by my adoring public. I then advised her that for the remainder of the day she was to address me as “Your Majesty.”

The carriage horses do not belong to us, although we do have our favorites. I have a horse of my own, his name is L.P. PrairieDreamer; Dreamer for short. I used to show Dreamer on the “A” circuit but it’s really hard to find a babysitter willing to start at 4am so I quit the club sanctioned shows and just putzed around with him in fun shows. “Fun” or “Barn” shows are more relaxed and entertaining anyway,(especially when combined with a few cocktails) as evidenced by the awards I won at those: 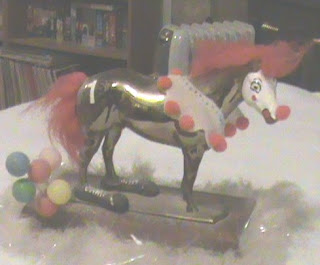 I won this for a game called


"Bozo Buckets" where you sat on your horse and had to throw wiffle balls into a 5 gallon bucket, which was moved further away with each toss. The game is not hard, but the horses don't like the noise the ball makes when it drops in the bucket, so they tend to dance around a bit. It's a really fun game to play when you've had a few cocktails. 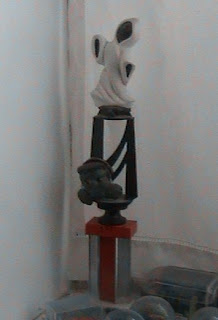 I won this at a Halloween Party at my boarding stable in Illinois. Ah, good times. Anyway, I dressed up like Jane, you know, Tarzan's Jane, and I cut up an old set of sheets that were Zebra striped to costume-up my Appaloosa.

Yeah, he puts up with a lot of crap. But this is nothing compared to when he was dressed as a Uni-Peg-Aloosa. Anyway, this is us: 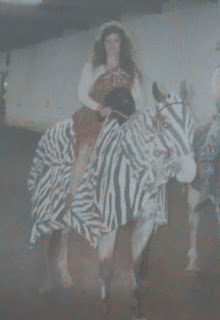 And keep in mind we've had a few cocktails.

And finally, these are two more we won after we moved to Utah. They had a fun show at the place we board now. 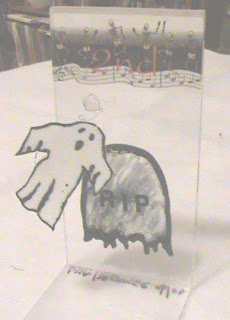 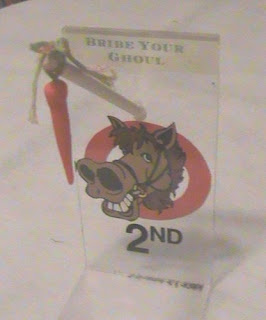 Okay, now, back to the Arte Y Pico award:

There are some Rules that come with the Award:
1) You have to pick 5 blogs that you consider deserve this award, creativity, design, interesting material, and also contributes to the blogger community, no matter of language.
2) Each award has to have the name of the author and also a link to his or her blog to be visited by everyone.
3) Each award-winning, has to show the award and put the name and link to the blog that has given her or him the award itself.
4) Award-winning and the one who has given the prize have to show the link of “Arte y pico” blog , so everyone will know the origin of this award.
5) To show these rules


So, here are three of my five award winners, with two more to be chosen at a later date:
www.jumping-percheron.blogspot.com
Right back to Stace because she posts a lot of pictures and video and has been blogging about her mare to help track her training and because she loves her so much that her mother has to ASK about her husband during phone calls (Yes, Stace, Paul got an earfull from your mom the other day...)

Jen at Cake Wrecks because she is f*cking FUNNY and I wish I could meet her and we'd go out drinking then stop by the bakery department at Walmart and mock them. Repeatedly.


Mel the Great because she posts such useful and funny stuff about being a writer. And did I say she's funny? And, she's a writer. And we should go drinking with Jen from Cake Wrecks and then stand at South Gate and mock everyone.

So, anyway, that's my three and when I find two other blogs to bestow it upon I will, but I don't get out much and during the time I was writing this blog I was supposed to be editing chapter 3, so...for the fine art of procrastination when I should have been working I will now bestow upon myself the following Major Award!!!

And, it doubles as a lamp.

And, yes Stace I do remember that man. We were waiting in the parking lot of Cuccina Toscatta for a double ride. You had Wes, and I had Tony, I think. We pulled into the parkling lot and took up/blocked almost all the spaces. And it was cold. But we had fun. We always had fun.
Posted by Lisa Deon at 12:07 PM

Brilliant award. I am so excited to see all the winners ;)

Yes, and next week we'll be having the evening gown contest...

I would like to thank my mother. The weird guy I met at the corner store five minutes ago.

Most of all to all my fans.

What an excellent collection of trophies, Driver. It calls to mind the fact that I've never won anything, though I once received a valentine card signed by thirty Marines.

I'd love to see the evening gown competition. Thanks for the giggles.