More of my favorite people, uh, I mean Horses…

PART TWO (for part one, skip to "What's in a name", it's right there! Just below this one>)


Charlie Horse is a favorite amongst the drivers because of his funny and curious personality, mixed with his arcane habit of “exploding” for no particular reason. For example, with me he enjoys breaking into a gallop when we leave the parking lot of Little America and make a right onto West Temple. No reason. He just does. And I know it, so I’m prepared. Of course I wasn’t the first time. But we were okay. Charlie is all black with a strip and snip on his face which makes him look a lot like Cletus, but he’s shorter ( although w i d e r ) and is half Percheron Draft and Morgan saddle horse. He was the horse I was working with the night I had a mechanical failure, and we got through it just fine. He is a very oral horse, always trying to snatch your cell phone off of your belt or the barn phone we hang around our necks. His favorite snack is Starburst Fruit Chews, any flavor. And if you have snacks, and he knows it, he will continuously use his lips to tug your sleeve, or your wrist, to remind you “Hey, lady, I’m here and I’m starving and would you pleeeese gimme a treat?” Of course the joke is that Charlie is so fat he’s lucky to fit between the shafts. And to demonstrate that, here is a picture of what we have lovingly dubbed his “Apple Butt.” 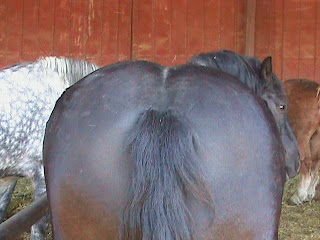 Rex has been described by Wease as “The first horse who will try to bite you when you enter the pen.” 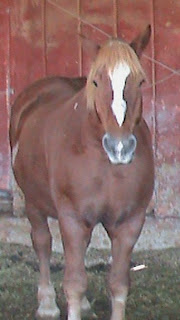 I don’t know if I’d agree with that, but he does tend to be sullen. Maybe it’s because Marky-Mark makes him wear a hat when they work together. And although I am not Rex’s biggest fan, I have asked to work with him on the occasion when I have some weird assignment, because he is willing to go anywhere and do anything you ask. Rex is a red Belgian Draft, so his color is a little unusual compared to a horse like Tony. 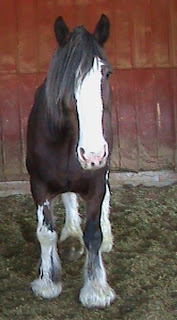 a Clydesdale, is the newest addition to our work force. He came from a family that kept him as a pet. When he first started his employment with us he occasionally decided he was “done”, like a lazy teenager, and simply sat down, once in the middle of a busy intersection. He was the horse Em was driving who rubbed his headstall off and took her for a leisurely walk around downtown, looking at stuff like a tourist, until Em got a man to grab his halter and stop him. Ralphie isn’t naughty, he’s just…different. When Ralphie is standing his upper leg bone ties into his hip about five inches above my head. He is very tall. 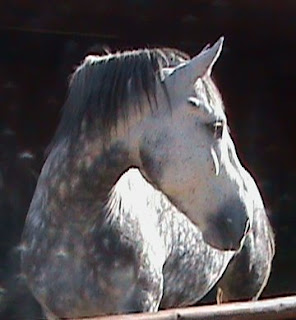 is one of the most beautifully colored horses we have. A Percheron Draft off of an Amish farm, he is a beautiful Dapple Gray. Jerry came to us with a partner named Ben, who looked identical to him. Ben, sadly, died of cancer. Jerry mourned for weeks, and when a driver would take him through The Gateway mall and Jerry would see his reflection in the store windows, would whinny, thinking it was his long lost buddy Ben. When they first arrived they had no idea what pets or treats were, but Jerry has since become attached to humans, and will follow you around the pen, attempting to stick his face into the halter you are carrying to get the horse you are working with. When he realizes that you are not coming for him, he stands by the gate, because whether or not you’ve come to get him, he’s leaving with you, like it or not!
People often ask if his dapples are real. We’ve started saying “Oh, no, it took me all day to paint those on.”

Some of the horses that live at the carriage company have never worked for us a day in their lives. One of those is Picaso, 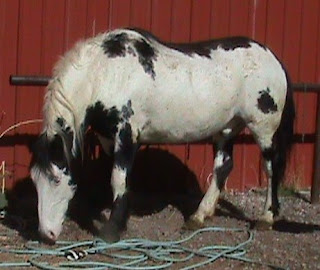 a beautiful Black and White Percheron. He's a paint. His name is Picaso. Get it? When he first arrived he was called Hutch, and he came with Starsky, a gray Percheron, who also never works. 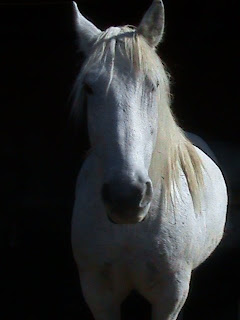 But they get fed, and wormed, and spend all day long with the other horses in the pens, mostly doing this. 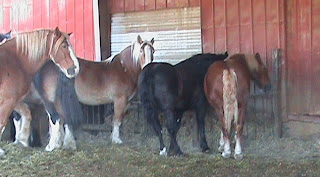 LOLOL @ the last pic on this post. Look at Wes! Waiting to eat last like usual.
Jerry is lookin' handsome! Ace is looking rather, eh, rotund like always LOL.

One night The Fabulous Todd had a trainee and they needed to get Ace out & ready for MBA. So when she came in her horse, Ace, was all tacked up for her, and when she got to South Gate Todd complained that Ace's tack all had to be refitted...and finally MBA actually looked at her horse Ace...and it was Smith!

When she complained about Todd I said, "Hey, MBA, who's been here longer? And didn't you notice Ace looked a little different when you left the barn with him?" Of course there was the time @ Christmas I tacked up Tom for ~A~ and used Tony's equipment...Couldn't figure out why it was swimming on him...Duh!

What an awesome bunch of co-workers you have! I'd love to have my "office" filled with those kinds of co-workers instead of the ones I currently have.

How does one get into a job like carriage driving? I always thought it would be fun (for awhile), but never quite knew who you had to know.

I remember when Charlie was little and I did not think that he would be big enough to pull on his own. But then again, I was the one who said that Tony would never make it to the street.

you have it backwards, MBA was assigned smith and silly todd pulled ace!!

At least with those mix ups, the bit was the same. Its pretty bad when a horse needing the Buxton goes out with a Snaffle. If you can't at least figure that out, you don't belong on the street. Or the time that Bart went out with the bit under his chin.

Ohhh... Ralphie is so handsome. And Jerry reminds me of Dreamer. I miss having the horses around!