Slave Driver. Yes, that’s how you know me. Google it and you get some, ah hem…strange links which have absolutely nothing to do with me. Many of them more than a little kinky… It is the name of a Bob Marley song, and also the name of a heavy metal band from Chicago. So, you might ask, why Slave Driver? I have explained to a few people that the name comes from what one would deem an unlikely source— Anti-Equestrienne Eco-Terrorists, or, as TheWiffleTreeNYC likes to call them, the “Humaniacs”.

But you see, I do not look upon the horses that pull the carriages around as my slave, or even as a beast of burden. I consider then my co-workers.

Just like you, I work with all kinds of individuals, each with their own unique personality. So I have decided to let you meet a few of them today so you too can get to know them.

First we start with my favorite. His name is Cletus 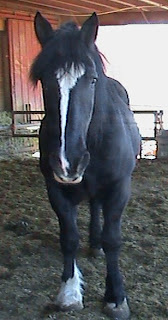 and he’s a black Percheron Draft with two white socks (both on the right) and a blaze that turns into a snip down his face and a white chin. Cletus is my favorite because of his work ethic. He is all about the business. Don’t cuddle him, don’t bother with endearments, just brush him down, tack him up, hook him to the carriage and lets go! His dislikes are balloons and the open back doors of box trucks. His favorite treats are Oreo cookies. 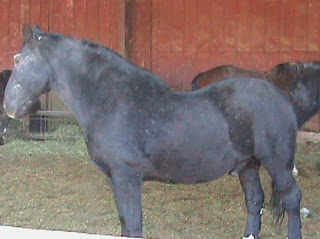 has a sway back. He also is a black Percheron Draft who was saved from the killers by the Carriage Barn owners when he quit bucking in the Rodeo. He would lie down in the chute and refuse to get up, so the rodeo people would twist his ears to make him stand. He’s had an additional 13 years of life because the owners outbid the killers at auction. Tom blows raspberries with his lips. Not the normal horse “snort’ you hear, but raspberries. He also likes to play “tag”. Every time you walk by him he is compelled to touch you with his nose, as if you need to be reminded he is still here. 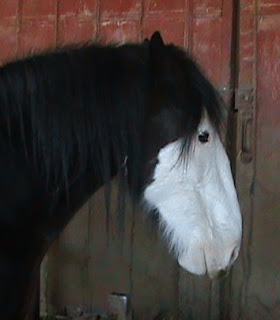 is the only mare. Tony thinks that she is his girlfriend, but that’s because Tony is a ladies man, and you’ll see why in just a minute. Libby is a Clydesdale, and yes, like the Budweiser horses but no, nothing at all like Stace’s mare Klein. Klein is not a Clydesdale! Libby doesn’t like to be touched by strangers, but she’ll take a treat if you’ve got one. MBA and The Fabulous Todd are the two people who work with her the most, and she can be a handful but they both love her because she is so sweet. 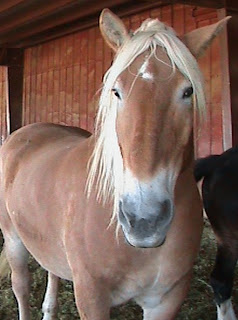 is my man, although Bill likes to think that Tony belongs to him. But since Bill doesn’t actually drive anymore, I guess that makes Tony mine. Tony, or “Fat Tony” as Ro likes to call him is a gorgeous hunk of Belgian Draft. Tony’s previous jobs included competitive puller and wagon hauler in a reenactment group out on the Oregon Trail. Tony likes any and all treats, but is a big ‘fraidy cat, despite his size. He’s also a natural blonde, something you don’t see too often these days. In the summer we try and find shade for the horses to stand in at South Gate, but Tony prefers to stand in the sunshine. I think he was, like, totally a surfer dude in a previous life.

And, yes, I could never forget Stace’s favorite, Wesson. 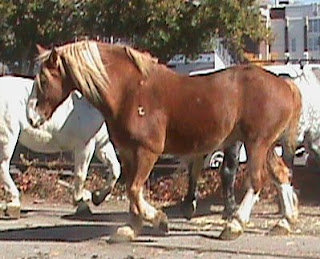 Stace left us for the Air Force but we continue to give Wesson the treats she got him hooked on, Nature Valley Oat and Granola bars. 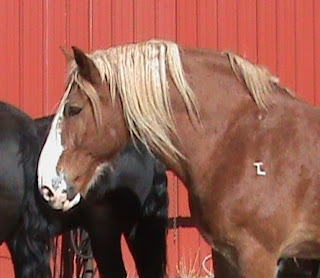 It’s his favorite. Wesson came to us from an auction with his teammate, 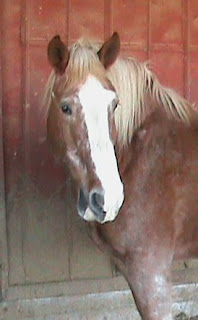 Both are Belgian Drafts. When they were a team, some believe, that they shared a brain, but after they were broken into singles it is my opinion that Wesson got custody of it and never, never gives Smith brain visitation. Or so it seems.

Well, that’s all for today. Adding the photos has made this post very long, but never fear, I have more, and there are other fascinating individuals for you to still meet. Next time. 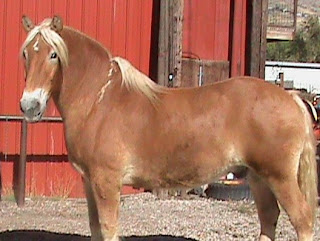 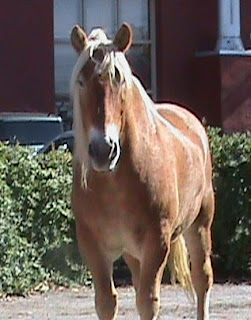 And of course I had to add more pictures of Tony He's the best looking one of all!
Posted by Lisa Deon at 3:57 PM

Awwwwwwwwwwwwwwww *SIGH* I MISS WES!! LOOK AT THAT FACE!!!!!!!!
LOLOLOL @ Brain Visitation. Smithy, to me always seemed like a real life cartoon character, he's just funny like that.
Klein thanks you for helping get her point across!

MBA helped me get some of the photos, but then they closed the gates and opened the pens for cleaning so all the kids got to come out and play. Much better for pics of Wesson in the sunshine. And wouldn't you know, Max found a bag of Alfalfa cubes and managed to eat a bunch of them. He's going through tyroid issues right now so we're keeping him on a low-protein diet and he gets vitamins with molasses. Ro was out the other day after work and she had some goo on her ear...turns out Max gave her a *kiss* and smeared molasses on her. Now she's a stick treat. At least the other horses think so.

Tony is SO HANDSOME! Seriously one of the most good looking horses I have ever seen. Wow....