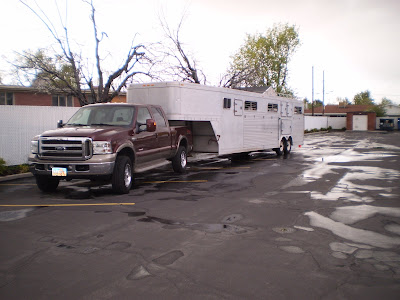 As I'm sure you're aware, if you have plans to do something outdoors the weather will be crap, just as if you're stuck inside all day it'll be sunny and 75, even in January. It's pretty much guaranteed.

Saturday I helped Ro with a wedding. We got to use the brand new carriage. 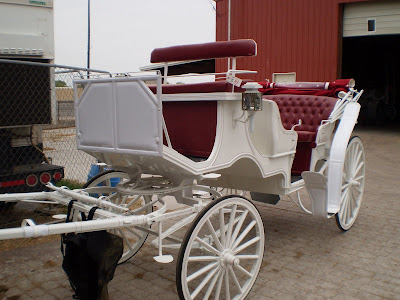 The owners bought it two weeks ago at an auction in Denver. I've just got to say what a pleasure it was to drive a piece of equipment that's hasn't been beat to shit yet.

The wedding job was to shuttle guests from the parking lot of a ward house to the home of the bride where the ceremony and reception took place. I had a thing in the morning so I arrived after Ro did. It was pouring. 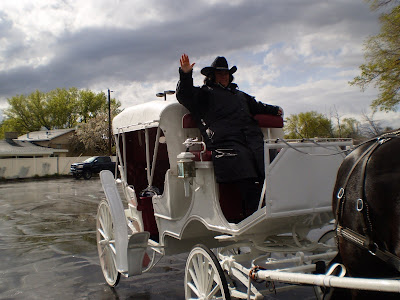 I waited for her to return from a shuttle and when she did I noted that she was wearing her duster which was soaked. I don't wear a duster. I'm not a cowboy, and they don't keep you very dry (dusters, not cowboys. I've never tried to use a cowboy to keep me dry but if I ever do I'll report the results)when I wear a duster I look like a matrix/goth prom kid; it's just too long on me. Plus, they're heavy when wet, so I opted to wear my rain gear which, while unbecoming, gets the job done. 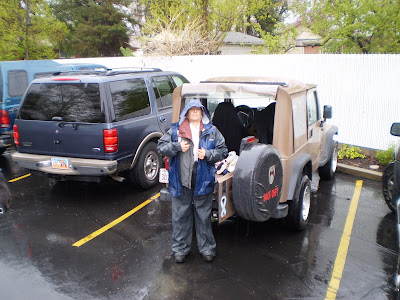 Ro also wore her leather gloves which got drenched too, so when she finally removed them they stained her hands orange, looking very festive with her purple nails.

The wedding was in a residential neighborhood, 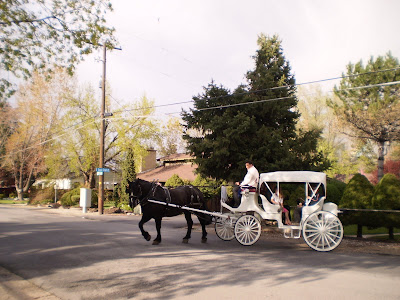 and the most precious thing about driving a carriage through there is the fabulous "WTF" expressions of the folks turning a corner and coming face to face with us. We even got a few "WTF is that!" looks from cats. Actually it was more like "Dude, that's the biggest f*cking dog I've ever seen!!!" Either way, it was damn funny. We also picked up a tick; that's a phrase I use when someone (usually a child but it's also been applied to drunks) decides to follow us around. One of our ticks was a 3yo girl. Her sister, about 4, had stalked us earlier, wearing only a shirt and nothing else. Nothing. Else.

MBA, curious as to what we do on specialties, stopped by with a Latte for Ro and a coffee for me, which was very nice, but of course it made us have to pee so, being that we were bereft of a bathroom we took turns using the horse trailer. Charlie Horse didn't seem to mind, as he kept trying to pee in front of the Brides house whenever we stopped to drop off/pick up.

Finally, the rain stopped and the sun came out, at least until it got dark. 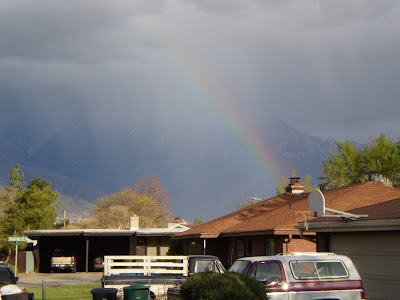 Of course, by then the damage had already been done. All of the wedding guests had serious mud problems including one of the bridesmaids. On the return ride many of them got mud all over the interior of the new carriage so as we dead headed back, Ro drove and I wiped up mud. It's a glamorous life... 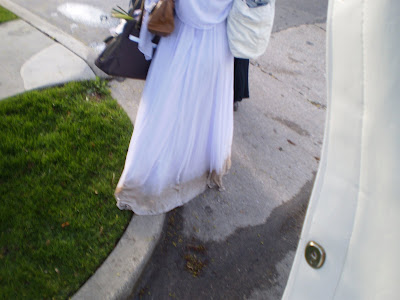 And we did finally manage to dry out, a little. I changed into my tux jacket so I wouldn't look so "homeless guy." 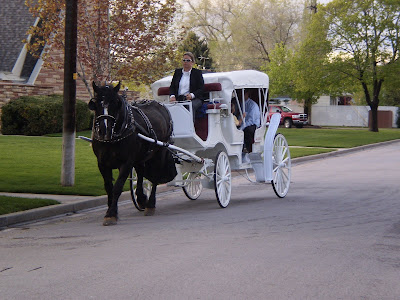 We did, however, run into residents who were happy either way. It was, after all, weather befitting them. 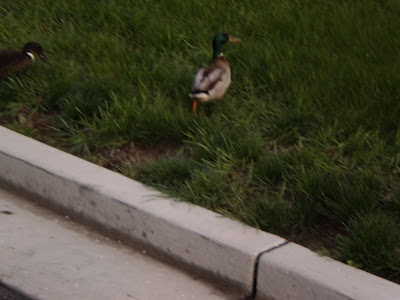 Wow, that is some swell piece of carriage. Cinderella, eat your heart out! I do wear dusters, but not the authentic cowboy ones. Pricey, whoa. One denim, one OD twill. Keeps me as warm as I need to be.

Somebody should make a movie that has carriages in it. Ooh! How about a wild carriage chase--have to run into a fruitstand or two. Very handsome rides.

In his book 'Hints on Driving', Captain C Morley Knight recommends dog skin gloves, two sizes too large, as the ideal driving gloves. Apparently dog skin doesn't get slimy in wet weather and oversize gloves, once they shrink up a bit and get broken in, are warmer and don't interfere with circulation. Knight drove a hansom in London in the 1800's. He also has some really interesting observations, and how to's, for professionals- or those who wish to cut a figure like one. As I recall I picked up a reprint of his book at Callister's. They don't carry dog skin gloves though.

*No dog skin gloves? Well, forget it then.

Actually I use a brand of gloves favored by drywallers...index and thumb are cut out. It allows for control (plus I can fill out a credit card slip) and my hands don't get torn up.