Somebody said that it couldn't be done,
But he with a chuckle replied
That "maybe it couldn't," but he would be one
Who wouldn't say so till he'd tried.

So he buckled right in with the trace of a grin
on his face. If he worried he hid it.
He started to sing as he tackled the thing
That couldn't be done and he did it.

It Couldn't Be Done

The above quote is particularly poignant for me because at 5:30 mountain time on November 12, 2009, I submitted my first novel, The Carriage Trade, to a literary agent.

Now, I know that this comes to no surprise to those of you who follow Confessions of a Slave Driver, as I occasionally blog about the trials and tribulations of being Pre-Published (yes, that is the term those of us who have not yet hit the shelves of Barnes and Nobel prefer. It sounds so much nicer than "Unpublished, and I have to tell you, I hate the term "Aspiring Writer." I feel it denotes "wanting" as opposed to "doing". I don't want to write, I write. Period.)

Anyway, the best way to get me to do something is to tell me that I can't. When I started writing my novel I did it because I had a story in my head and I needed to get it out of there before I went insane. Now, some may argue that by then I was well past the point of no return on the whole insanity thing, but nevertheless, I put the story on paper first, then I went about learning how to write a novel. I am infamous for doing things bass ackward.

So after years of writing and rewriting to fix all the things I did wrong, I finally submitted the finished piece and can move on the next work in process I have sitting on my laptop.

Now, you may ask, why the heck did Slave Driver invest the last three years in something for which she did not get paid and may never get published? Neglecting her family (Yeah, it toughened them up and taught them to be self-sufficient…) Living in a dirty house (nobody cares anyway, and I've never been much of a clean freak) not to mention all the drinking I've missed out on…Okay, to be honest, writing never inhibited me from partaking in the occasional adult beverage. In fact, I'd say that drinking while writing is my forte. I find a glass or three of wine helps to lubricate my creative gears, so to speak. So I guess that doesn't count. But writing is a solitary endeavor, so it's not like I could do it in a bar surrounded by my partners in crime friends. Which brings us back to the original question of why?

Because, it's something that I'm passionate about. That's why even when few of you come and visit, and even fewer of you comment, I still blog. I'm still going to churn out words, twice a week, because it's writing. For years I've had jobs, but never a career. When I began writing I discovered that all the weird and varied jobs I'd had were my preparation for a career as a writer. I mean, come on, working as a mare handler at a stud farm, and being the personal assistant to the director on a movie? Not to mention the year I was a lunch lady at a high school. My resume bounces from one obscure job category to another, like a pinball. But that's okay— it's all been fodder for the word mill. It's all been experience.

Which bring me to this:

The eBook I contributed a chapter to is now available for your purchasing pleasure. It's geared towards those of you who are dissatisfied with the current status of your employment or life and want to move forward into a position that you might actually enjoy. It's chocked full of stories and anecdotes about how successful people took a look at their lives and decided that a change was in order.

Inside the virtual pages you will find inspiration from such notable individuals as cookie giant Wally "Famous" Amos , marketing strategist Michelle Kabele , motivational speaker Dave "The Shef" Sheffield along with career coach and networking goddess April Williams . I highly recommend it for those of you who seek a change and don't know where to begin.

Here's the secret; it begins with you. 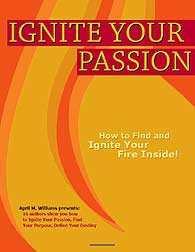 And, I can get you a discount. Because we know I'm all about not paying retail.

Use coupon code Le5Ord3r04 for a 5% discount

My name is *Lisa Williams, and I am a published writer.


*Truth in advertising; I am not the Lisa Williams who speaks to dead people. At least, none that I know of.
Posted by Lisa Deon at 10:13 AM

Great Blog! And I too think I write better with a glass of wine (bottled not boxed) on my desk. Then I can sip and enjoy!
Congratulations on the eBook.
Mary

Congrats, Lisa. Hey, we have to start somewhere...that's where I started, too. (grins)

Lisa, what a terrific blog, and I feel like giving a rousing cheer for you, for sending off your manuscript. Wahoo! You give hope to the unpublished masses of which I am proudly a part.

YOU GO GIRL! This is only the beginning. :)

SD;
Congratulations and much continued success. I'm looking forward to the day when I can trade on dishy exposes that purport to have known you when. But what of the horses, how did they react to this good news? Are they fond of laurel and myrtle?

Congratulations on the finished product and good luck with your submission. Keep up the great work and stay warm

Good luck! I loved the book! I'm sure many, many other people will too!

Oh. My. God. You got published AND submitted a full to an agent? Okay, I knew you got the request, but still. When were you going to TELL ME THIS?! You must be sending out stealth tweets while I'm at work and can't read them.

This is SO awesome! Sending HUGE congrats from here. Even if you and/or the agent decide you're not right for each other, that is a gigantic step. So very proud of you!

Hell, I might have to crack open a bottle and have a B.A.G.O.W. in your honour.

bioni: a fine wine reserved for those with enhanced super powers; here, have a glass ;)