In other words, they get trashed real fast.

As you can imagine I've been a busy little beaver over here in Salt Lake. The Sundance Film Festival opened Friday evening here with the premier of "Get Low", a film starring Robert Duval, Sissy Spacek, Lucas Black, and one of my all time favorite people, Bill Murray.

Why Bill, you ask? With a headliner like Duval, why fawn over Mr. M?

He's a Cubs fan, and a Chicagoan (okay, Wilmette, but it still counts). Duh! It's me we're talking about here, not, well, you know, someone who is not me…

So Bill was at the premier, using a crutch ("I got hurt rescuing a bunny rabbit.") At one point he, and I know this will come as a shock to those starry eyed readers of "People" and "The National Enquirer" who keep the paparazzi in business because they worship celebrities, had to use the restroom! (gasp!) so, being he was "other abled" I escorted him down in the elevator to the closest men's room available where stairs were not in the equation.

On the way back up he curiously popped his head into the "Green Room" which at this venue our volunteers use as a lounge. It's great because a video feed from the auditorium allows them to not only watch the film, but we also know when it's ending, if the sound goes out, the film breaks, or there is some other kind of disruption. So Bill walks by, pops his head in.

"It's our lounge where our wonderful volunteers hang out and relax," I replied.

Bill looks up at the monitor. "What are they watching?" he asks, turning to me with a quizzical expression.

"They're watching your movie, Bill."

Feigning being startled, "Oh, I'd better go and leave them alone then."

On the way back I mentioned I grew up in Des Plaines, (a suburb of Chicago) he replied, "I had cousins that lived in Des Plaines. They were really cool. Then they moved to Iowa and got weird."

I told him, "I hear that Iowa is going to use that as their new State Motto; "Move to Iowa, we'll turn you weird."

So working the Gala was a lot of fun, and it is great seeing all my Facebook Sundance friends in the flesh again. At the volunteer party last week I got to meet two people who are "imaginary internet friends" in person, which was interesting. One of them, a film maker from Chicago, was a lot of fun. We chatted and networked and I'm hooking my nephew up with him to get some experience "in the business" since that's what he's going to college for.

The other guy, who is a very handsome man in the field of media, "friended me" using the find-a-friend app and did not actually, cognitively "look" for me (or even, I suspect, at my profile. Our 'friendship" was the result of an email blast that could have included anyone…) Well, I saw his name tag, introduced myself, and I think I kind of creeped him out, in a Fatal Attraction/Stalker-ish boiling your puppy kind of way.

And you know, I'm okay with that, because it should keep him on his toes for the balance of the Festival. 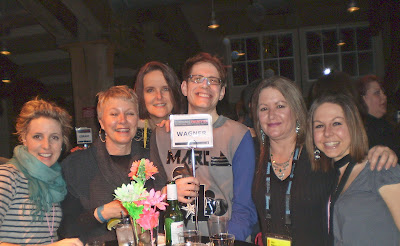 The Rose Wagner Team
Posted by Lisa Deon at 11:54 AM

Bill Murray! Oh my goodness, Driver, you took Bill Murray to the John? Oh my gracious! If I ever get to SLC, I want to touch your hand--I know, I know, you will have washed it by then, because, baby I am so not coming there in the winter--but Cheezits! Bill Murray! Oh!

I'm sending that to our governor right now.