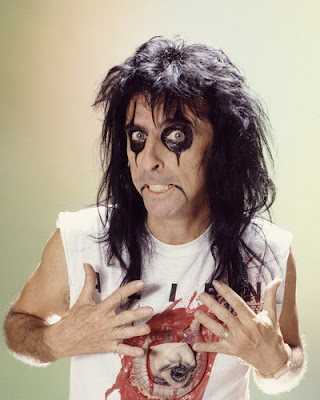 But I love that it's Alice Cooper's birthday, because I grew up a fan of his music and identify the most with him on the list of Famous Birthdays Today.

What, you are asking yourself, does this have to do with Slave Driver?

Well, to quote the Beatles, "It's my birthday too, yeah."

And here is what I'm doing to celebrate:

First off, it's a Thursday. Not typically the day of the week one goes out to party. Plus, Mr. Slave Driver is on a clear liquid diet for today because he has a procedure tomorrow typically reserved for men of a certain age to check for polyps. So, obviously, there will be no fine dining or cake and ice cream today…we'll do that Saturday after he's recovered. Along with looking for a new clothes dryer, since ours quit on us last week.

It could be worse; several years ago my birthday fell on Super Bowl Sunday, the official holiday for football fans where the rules dictate that one cannot be more that 6 feet from a wide screen television. That day sucked ass. Because unless you follow football,(I don't) or are an aficionado of Buffalo chicken wings,(meh) your celebratory choices are severely limited.

The birthday I remember most fondly was a long, long time ago.

When I was a teenager, like most teenagers, my teenage friends were poor. My high school boyfriend was in a garage band, and I'd just had a major fight with my parents. So, being somewhat depressed about the entire situation, while I sat around band practice and stewed about the argument, my boyfriend and another person borrowed my car, took it to a car wash and cleaned it out (I'm a car slob. My personal vehicle always looks like a family of Gypsies has taken up residence. I subscribe to the theory that 1) it takes less time to apologize for a mess then it does to clean it and 2) if I'm ever stranded, I can forage for food in my car and survive for at least a week on the various half filled bags of Fritos and Starburst Fruit Chews I unearth from beneath the seats.) Then they filled the gas tank. For you young pups, back in the late 70's gas was between .32 and .40 cents a gallon. The most money I would invest in my gas tank at a time was $5.00, which filled the tank on my '67 Pontiac Catalina at least half way. I know this sounds like a fabulous deal, but mind you my car got a whopping 8 miles to the gallon. It could, however, sit eight people, comfortably, inside and fit three more in the trunk. You do not want to know the details of how I know this.

Anyway, in honor of my birthday I'm doing nothing today, so I'm sorry to report that this is the blog you're getting. It's about as close to nothing as I can manage.
Posted by Lisa Deon at 10:11 AM

Well, bah, humbug and Happy Birthday. I will not ask how many; I doan wanna admit to mine!!!

Hey, happy birthday! I missed t his yesterday--didn't turn on the computer till late in the day. Excuses, excuses. So, happy birthday. And, come Saturday, happy feasting/celebrating.

Loved the car story. Catalina, huh? And I'll bet I know why you know the seating (?) capacity of the trunk, but that's another blog.

Dang! I don't know how I missed this before!

Oops. I'll have to work on that high note at the end there. Didn't mean to break that glass.