Working as I do for a carriage company there are not a whole lot of perks. The hours are long, and those long hours are usually hot, cold or wet. You can't use the john unless you wrangle another carriage company employee into holding your horse for you while you disappear into Temple Square for a stolen moment of relief in the heated/air-conditioned comfort of the Visitor's Center. And you pack a lunch or brave the yuckyness that is the Carl's Jr's drive thru, because decent restaurants just don't see a need to add "Carriage Parking" in their lots. However, the one perk I do have, the one that makes me shudder at the thought of looking for a "real" job (ie one with actual schedules) is the benefit of being able to pick and choose the days on which I do work.

This is my benefit package. It's the reason why others were jealous because I traveled to Chicago last August for two weeks, returned home for four days, then took off camping for another week. And while it tends to drive Ro insane, ("Who the hell am I supposed to get to cover this weird wedding? It's goofy, and I need you to drive it!") She cannot complain over much because she also takes off whenever the spirit moves her.

Which bring us to this: I do not sign up to work holidays that involve drinking and/or fireworks.

Because on those days I usually find myself drinking and blowing off fireworks, that's why.

However, this past Friday I conceded to work the Riverton Fourth Of July (but held on the Second of July) Parade. I assumed it would be easy, fast, and painless. Three words I adore.

What I got was what I always get: long, tedious and so-not-worth-it. I won’t go into all the details, because the blog will only spiral down into a rant, which is not unusual, however I have given Ro permission to beat me senseless the next time I agree to drive in a parade. And after she has beaten me into a heap, I've encouraged her to then give several swift kicks, lest I ever forget and agree to work a parade again.

Anyway, although our parade ended much better than some others did, here are some observations regarding it:

I drove the Grand Marshall, Cleatus Hamilton, and his lovely wife Sharon. Cleatus is a relation to the carriage company owners, and my favorite horse Cletus is name for Grand Marshall Cleatus. They even got to meet, although I don't think either one was too impressed with the other.

And while Cleatus (the human one) and Sharon are nice, they are getting up there in age, so when they realized the quantity of candy they would be required to toss to the crowd they blanched a bit. And I must admit that for a little while there the begging from the sidelines was so intense I felt like I was roaming the streets of Calcutta with a pocket full of coins. So I assisted, tossing taffy high into the air and watching it bean bystanders on the noggin.

Okay, I admit, that part was fun. Pelting people with candy left me with a warm, fuzzy feeling. Giddy, even.

Plus it gave me plenty of ammunition to use when children ran into the street and tossed "poppers" at Rex's hooves. I "gave" those kids extra candy. At a high rate of speed. Aimed at their heads.

Oddly enough, they thanked me for it.

Anyway, for your viewing pleasure, here are a few photos from the Riverton Parade.

And while you enjoy them, I'm going to get a big ass glass of wine and shoot bottle rockets disguised as Tootsie-Rolls at the neighbor's kids. 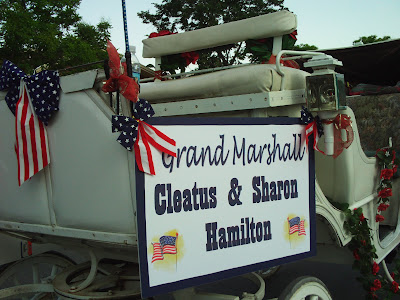 The Grand Marshall sign. It's a good thing I drove Rex, if I'd driven Cleatus he would have been confused by all the people lining the parade route shouting out his name. 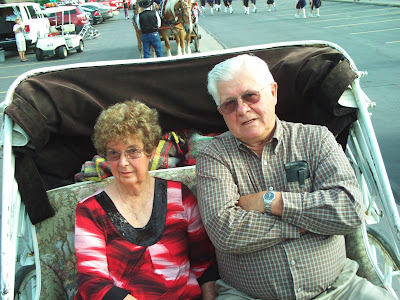 Human Cleatus with his wife Sharon. 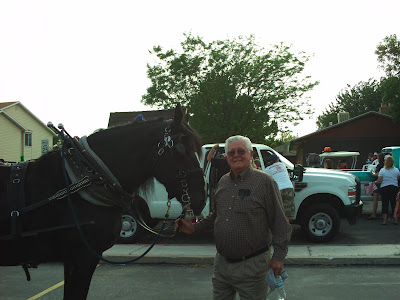 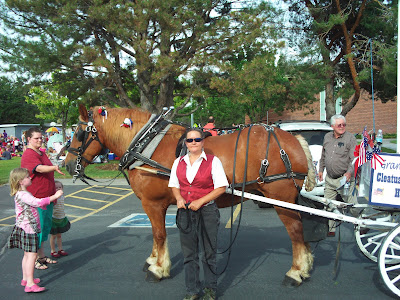 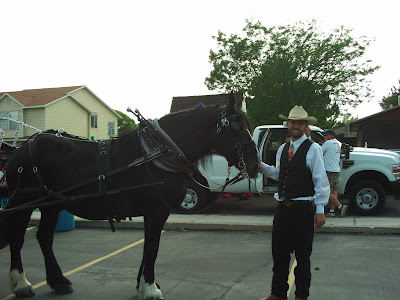 Hardrock and Cleatus: they brought up the rear. 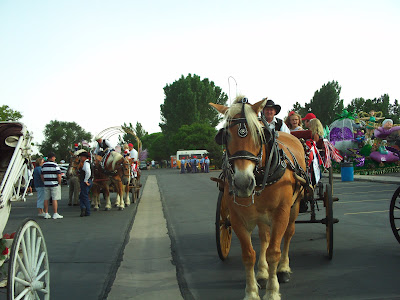 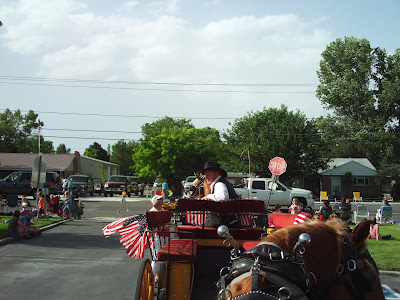 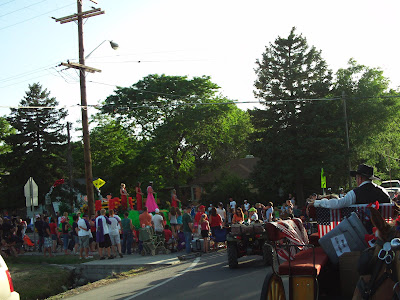 Scooter and I were at the front of the parade, Hardrock at the end. We had to sit and wait for it to be ove to get back to the horse trailers. I spent five hours of my life working this parade, none of which I will ever get back.
Posted by Lisa Deon at 2:26 PM

You say the "Cleatuses" met. Perhaps that should that be "Cleatusi"?

Thank Goodness your parade didn't end up like the one in Iowa: with the driver dead and up to twenty people seriously injured by a runaway team. This accident has been very bad press for us horse professionals and in particular carriage drivers.

I agree: I hate parades and do not do them any more. Ever. Period.

I must add that the "easy, fast and painless" did not come out of my mouth!!

Ro, I have changed it from "I was promised" to "I assumed". My fault, and I apologize. I'll sure I will mis-quote you again in the future.