Tom and his "Wheel Of Mystery"

Tom. Ahhhhh…. Yes, Tom. I like Tom although he's no great beauty. He has a very noticeable sway back, he's scruffy and a little goofy looking. To counteract these handicaps he has a great work ethic, likes to blow raspberries, and has multiple personalities.

I'm sorry, what was that again?

Oh yes, Tom's "Sybil" complex. Well, it has to be that, or the other choice is "Tom's Wheel Of Mystery." You see, with 99% of the other horses we know their personalities and therefore the things that "Set Them Off." For example, Cletus dislikes Balloons, stepping on manhole covers, and the open back of box trucks. Charlie is not a big fan of Schnauzers and cement mixer trucks. Tony is afraid of leaves blowing around, and Max? Grocery sacks do it for him.

With Tom, one can never be too certain. Sometimes it's bells, sometimes it's, well, I've made a graphic to assist in your understanding. You see, I firmly believe that Tom, on a daily basis, spins a wheel in his head to randomly choose what he will be spooking at that day.

Things Tom might choose to spook at:
(AKA Tom's Wheel of Mystery) 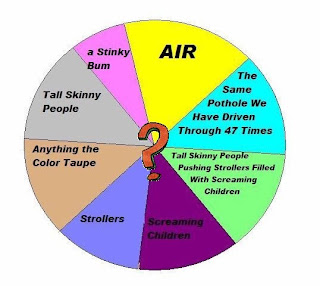 Sunday night Tom and I worked together. While we were in the barn getting ready he tried to bite me, but I'm too fast for him and he missed. He never made a second attempt. Once we were on the street he spooked when I sneezed and again when we went through the same pothole that we had gone through at least 5 times that night. Then he jumped sideways, I have no idea why, it must have been scary air or something.

So working with Tom is an exercise in vigilance. One can never be quite sure what might make Tom go "Aaaakkkkkk!!!" and take a sudden jump to the left (or right, depending on which side the mystery object/sound/shadow is on) or come to a full and complete stop to take a good long look at the scary monster he perceives might eat him.

Mr. Carriage Clause had a photo of Tom in his locker from a parade they were in. Mr. Carriage Clause proudly pointed it out to me once, and then advised me that it was Toms one and only parade appearance. Parades, you see, while full of merriment and wonder for the audience, are rife with Things That Eat Horses. This is why there are certain equine employees that are considered "Parade Material" and others that are "Not a Snowball's Chance in Hell."

I did a video shoot last January for a local TV station that wanted footage of their weather person and her husband in a carriage to prove that they were just like the rest of us. Out and about the town, riding in a carriage up in Memory Grove, having a delightful time. I was asked to take Tony. Tony's nickname is "Tony the Kitten-hearted." I've worked with him before up in the grove when a bride was having her photos done, and the camera crew was using one of those big floppy silver light reflectors. Turns out, Tony is not a fan of big shiny objects. Not knowing exactly what kind of equipment the crew was bringing with, I opted to drive Rex, who, while not a great beauty like Tony, is as solid as a rock when it comes to weird shit. So fugly horse it was. At least we both matched.

So if you are wandering around downtown Salt Lake some evening and see a swayback black horse that looks like he's doing the "Time Warp" dance from The Rocky Horror Picture Show, it's probably Tom. Please be kind to him, and leave all your weird horse eating stuff at home. I'm sure he'll appreciate it. I know the driver will.
Posted by Lisa Deon at 10:12 AM

You left off "his own urine" on the wheel of mystery. Standing at the corner of State & N. Temple after visiting the grove he decided it was time to relieve himself, as you know there is a slight downhill slope....well let's just say Tom could have won dancing with the stars all by his lonesome, it was a special moment for all involved particulary the motorist going East through the intersection at that exact moment. I'm sure they had to go have their upholstery shampooed the next morning.

Well, as a "Wheel Of Mystery" it changes weekly, daily and sometimes by the nano-second. But that's Tom. He's a trip.

And people don't think that horses have personalities!?!? They definitely make the best co-workers. I would love to trade any of my daytime co-workers for (almost)any of the horses at the barn. You may keep Rex. He would not be an improvement. Ace wouldn't either. Or Jerry. Never mind. How about I just take Bart, Jim, Bob, and Charlie. You may keep the rest.

Now, I agree about Rex and Ace. They're the surly co-workers prairie-dogging it in the cube farm, trying to figure out who's got a better deal than they have, but Rex is the go-to guy when it comes to doing weird shit. Kid's just getting too old to deal with the BS anyway.

You are welcome to Bart. He's a fucknut. Belle can have him back and beat the crap out of him as only a mare can.

I have often wished I had a whip for my co-workers. Had to settle for cryptic comments and steely glares. And the occasional weird thing in the employee microwave. Oh, and once, for great fun, I turned the volume of our audio booth to max, did some secret switch things that created a screaming feedback tone (1000 cps coming through all the speakers in the building) and I went home. Their service revolvers were no darn help at all. Sometimes I do miss working. Mostly not.
Damn, I am sick and not much lucid.

Now that the Nyquil has worn off a bit, I realize something important: in my working life, I was not the driver--I was the horse!

You know, Dusty,sometimes being the horse is not all bad.

Do not make disparaging comments about my future horse. He merely misses Belle. He is a masochist that believes that he deserves to be chewed, bitten, and nibbled on occasion. With any luck, by this time next year, or the year after, that long mane of his will be blowing in the Wyoming wind.

Keep dreamin', sister. You and Stace can be the charter members of the "One day I'm gonna own my favorite carriage horse" club. Tony & I will live in Tahiti with Cletus and a mob of ripped cabana boys. You, Bart & Belle will inherit the wind in Wyoming, and Stace, Wesson and Klein will remain in Hawaii and the Air Force will never ship her anywhere else. She will then have Wesson undergo a testicle transplant and the only babies she will ever breed will be the ones from Klein and Wes.

And we all live happily ever after.

Oh, and we all lose enough weight that we're finally proportionate to our height. At least you & me, Stace already is.

(Which is why we hate her. Plus she lives in Hawaii, and probably have an ass kicking tan by now.)

I thought that I already was a charter member of the one day I am going to own my favorite carriage horse club. Belle is obviously my favorite. I just want to help Bart fulfill his life's dream. He needs a mare to pick on him for him to be happy.

Hmm Lets not forget the Wrigley gum wrapper....
Those are always interesting...

This blog reminds me of the time that I have never seen Wes more scared in his life. A guy with a snowboard was walking by us on the way out to South Gate and Wes TOOK OFF. Poor Wes! He just needs to come home with Klein and I already.
Tom and I just never got along. I know he's the love of Angie's life but...I just don't get it.

Well, for the next "Tom Wheel" I recommend adding the big faces that are plastered on the sides of buses. Those freak him out! Of course, they freak me out, too.

Sunday night Tom and I worked together again because Tony had lost a shoe. So, everything was going well untill some ASSHOLE hid behind the construction sidewalk barrier on Main and, as Tom walked by, minding his own business, doing his JOB, this ASSHOLE jumped up and yelled "Barrrghrrg!" at Tom, scaring him sideways.

I had a carriage full of children, and we were luck the train wasn't coming or we'd a been part of it.

Had I my whip in my hand, ASSHOLE would have gone home with welts across his face as a reminder to "Be Kind To Animals Or You Will Get Your Ass Beat." As it is, since they were leaving the Christmas Devotional at the conference center I'm pretty sure he's going straight to Hell.

Then when we were on NT by the bridge, Tom spooked at the black horse walking abreast of him on the sidewalk...Yes, his own shadow.

cruchnob:
Assholes who go to church then walk out and are mean to animals.

Used in a sentance:

"All cruchnobs have their own level in Hell, where the animals get to have their revenge."

Okay, without getting too personal here, um, have you ever had Tom's eyes checked? Because, like, um, he sounds kind of nearsighted. Or maybe he's just picking up on the rampant wild-eyed nutty sky-is-falling-right-this-minute zeitgeist.

Poor Tom. The more you talk about him, the more I can relate. Glad you were able to save the wagonload of kiddies, even if you do have inner conflicts about it, and that you didn't have to bailout.

Elk on buses. Those are scary, too. You need to write a new blog, 17 comments on one blog either means that you have started a contraversy, or the rest of us are all bored and have nothing better to do at 10:30 at night.

psiatili -- new obscenity to try on my students in the morning!!!

The problem is, BPA, that I've had no time to write a NEW blog, but things keep happening with Tom, and this is starting to be the blog comments that never end but I'm okay with that because, well, I'm freakin' BUSY right now...

alnesti: Scuzzy dirty: When you don't have a chance to clean your house it gets alnesti.


and besides, this is like our version of MSN Messenger, which, while you, me & Dusty are all here at the same time, it appears neither of you have. Just me.

Dusty, glad to se you back. Hope you are feeling better.

ya know just because Tom is paranoid doesn't mean that they're "NOT" out to get him.