It's beginning to look a lot like...Las Vegas 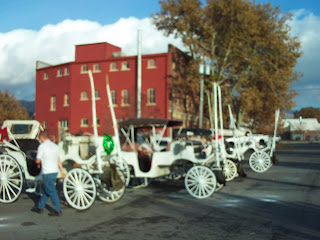 The Christmas Carriage Driving season opener was this past Friday night and we were fortunate that the weather was good and people came out to take rides around Temple Square to see the lights. The usual suspects made their appearance; Bagpiper guy wearing his kilt and Santa hat; harmonica guy standing on the north east corner by the wall that surrounds the square; Gary and Raine with their hot cocoa stand; assorted panhandlers preying on the generosity of the ignorant but soft hearted who unwittingly finance their addictions, and of course the cast of thousands of morons piloting their vehicles who bypass public transportation (which would drop them a block from the lights) in favor of cruising around for 45 minutes looking for a parking spot, legal or otherwise.


The funnest part for me is the annual "Pimping of the carriage", and yes, I go all out. Why? I think I already told you; when all the carriages are the same price why choose economy when you can go first class?


Now, I advised The Fabulous Todd a while ago that lights sell rides. After decorating his carriage he finally believed me.


About half of the carriages are decorated, and although on Friday and Saturday,when Ro was our stager, decorations are superfluous because we are loaded from the front of the line, on Sunday we were on our own. 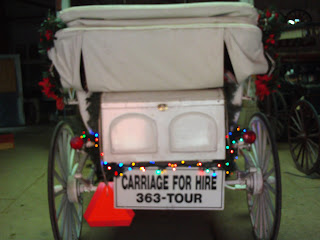 On Sunday I kicked ass. Besides the lights I also run my iPod loaded with Christmas music. People were walking down the line, passing up all the Plain Janes, and picking me out of the middle.


Anyway, for your visual pleasure I took photos of the decorated carriages and some of the horses.

This is my carriage sitting in front of the carriage barn on Friday before we went out. 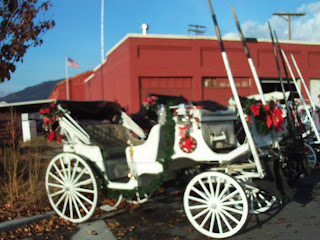 This is Marky-Marks carriage at South Gate 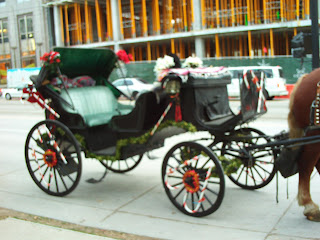 And of course, Marky-Mark and Rex. In matching hats. 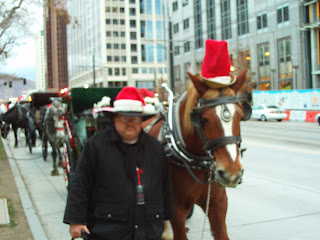 We haven't had bad weather yet so my top has remained down, but here is a photo of the garland that runs along the top bow supports for the roof. 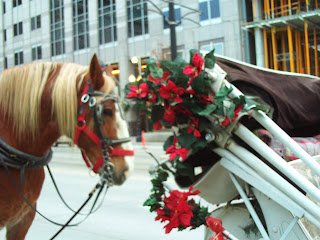 I dumped my old Christmas lights because they sucked too much juice out of my battery and would therefore crap out around nine pm. I bought LED lights at Wal-Mart and layered them over the old lights because I'm too lazy to take the garland off, unwrap the old strings, and re-wrap new ones. These are so much brighter it's amazing, althought I liked the colors of the old ones much better.

Here are the old lights: 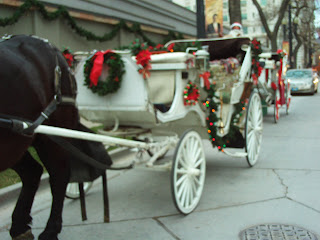 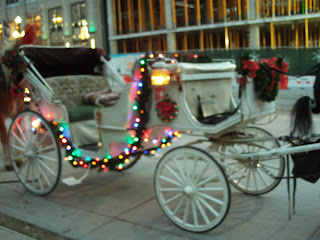 The Fabulous Todd pimped his ride. Black carriages suck the illumination out, so he needs to add more lights to compensate. 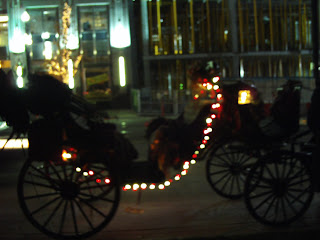 And of course no photo album would be complete without Scooter's carriage with Drunken Santa on Wessons back. 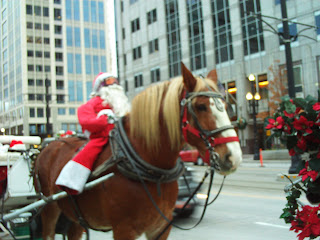 By the way, Drunken Santa is so popular that people have caused car accidents stopping in the middle of the street to take his picture. Of course there are also a number of traumatized children from the night his head fell off.
Posted by Lisa Deon at 12:06 PM

Very pretty! Yep those LED lights are bright. We have some around here for night lights. I guess that in a few years they won't look odd to us. Recon the first people to use electric lights rather than candles or lanterns had to adjust, too.

Just very pretty to look at those carriages with the garlands and lights. Now, how about some hot cocoa? or a toddy?

Hope you have a fun, safe season and make a ton of dough!

That's "reckon," not "recon," though coming from me, it could be either.

I can't believe that the drunken Santa has raised his ugly head. Except, is he drunk or dead? I think that he is now dead. Why dig him up? Let him rest in peace!!!

Hey, Mark and Rex are looking mighty stoic. They both look like they are waiting for someone to bring them some snacks!

They are food sluts!!!

Don't be pickin' on Mark. He is one of those few really nice guys.
Now Rex? Yep, you can pick on that dumpster divin' crack horse.