Hey, Tony, Why The Long Face? 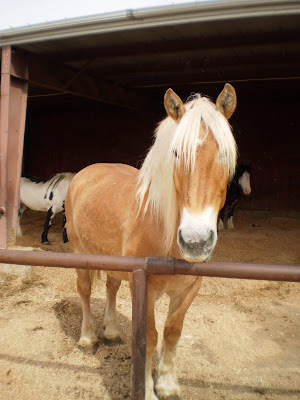 Excuse me while I do a little bit of personal business here for a moment, would you?

Slave Driver shakes her laptop to get BPA's attention

SD: "Last night I was informed by a person in a KSL chat room during a discussion about the carriages that our horses are worked until they are near death then sent to slaughter houses and turned into dog food or shipped overseas for human consumption. Can you look out your window and tell me if Belle is standing out in your pasture?"

SD: "Does she look like she's been worked to death?"

SD: "Was she near death when you got her?"

SD: "Do you think she misses carriage driving?"

BPA:"No. This is a horse that doesn’t miss carriage driving, but she probably misses pulling. She wasn’t cut out for it that’s why she was done."

SD: "Do you think that she's a better riding horse because of it?"

BPA: "She is a better, safer horse now because of her exposure to the downtown environment. The thing about the horses in Salt Lake is, they are given a chance to acclimate and if they don’t they are sold, and not for meat. Mia & Carl are in pasture, Mikey, my favorite, is in a pasture, and since he was so important to me the owners let me know that he was sold to an older couple so they could give their grandkids rides."

"I would sign up to drive Jim, Charlie or Bart any day of the week, because I know they will not freak out. I also know that the carriage horses never suffer from malnutrition, which is a problem that I've noticed in other horses I've looked at."

"Belle has no foot problems because they kept regular trims on her and farriers tell me that she has excellent feet."

SD: "Thanks, BPA. When I was told all of our horses go to slaughter I was worried."

SD: "Hey Wease, can you look outside and tell me if Kid is still in your back yard?"

SD: "And do you still use him to pull your meadowbrook cart?"

SD: "How does he react when you put on his driving tack and pull out the cart?"

Wease: "He loves it. He starts acting like a four year old colt."

SD: "Has he had any problems since he retired?"

Wease: "No. He lives in a pasture, eats lots of food, he has weight problems like any older horse might, but that's not the carriage barn's fault."

SD: "Does he seem stressed when you drive him?"

Wease: "No, he loves it. Horses need a job, just like people need a job. I hook him up and he steps out. His personality has not changed since he came here. He's still the same rock solid horse who wants to work which was why everyone loved him."

(I'm going to visit Wease, along with other members of my tribe, and I'll be driving Kid on what Wease calls" The Cemetery Tour" this weekend.)

See, I contacted the two former carriage drivers because when I was told this information I was worried…

Okay, not really, because while listening to the Director of the Utah Animal Rights Coalition part of his argument for banning carriages was because, "The horses look sad."

(Anthropomorphism: an.thro.po.mor.phism : the attribution of a human form, human characteristics, or human behavior to nonhuman things, e.g. deities in mythology and animals in children's stories.)

He also stated that "The horses are denied water."

Really? Then why do I haul that five gallon bucket of water around under my carriage? So when we're bored we can bob for apples?

Charlie likes to look around at stuff when he's working. Ace typically falls asleep at South Gate. Jerry will follow you around the pen when you walk in to get the horse you're working with, and will repeatedly attempt to stick his face in the halter. Bob tries to cuddle up with you when you're standing at South Gate holding his lead rope. And Jock, who was 30 when he retired and 33 when he passed away, lived out the remainder of his days at the Carriage Barn. The owners would close the gates and he was free to wander the property. He would occasionally walk into the shed housing the vehicles, turn his big body around, and back up to the front of a carriage, waiting to be hooked up, which he never again was, because he was retired.

That, my friends, was a horse that looked sad.
Posted by Lisa Deon at 10:30 AM

I was hoping you'd post about this. It will certainly make for an interesting weekend drving.

I wanted to tell you about 2 of the other retired horses. I bought King and used him as a riding horse for about 2 years until I had to sell him because of finances. My daugter, who was about 4 at the time rode him all over. I sold him to a lady who had a side saddle made for him. He is living in a 5 acres pasture, pushing around all the other horses. Was he in bad condition when I bought him? No he was great. I even drove him during Christmas that first year. He was so happy to be back around all those people loving on him.
I wish people would find out the truth and educate themselves before spouting off.

I ran out of room. Another horse, Sam lives down the street and was retired at about 10(I think). He's being ridden and driving in the country and loving it.

Probably not. It's supposed to drizzle this weekend, which means, as past experience has shown, that while we ( well, not me because I'll be up at Wease's having fun. :) ) stand outside and work in all kinds of weather, the people who show up to protest stuff are fair-weather fans and run at the first sign of precipitation.

Because they aren't as committed as we are.

Entertaining & informative, poignant, yet hilarious - what the heck else could someone ask for in a blog entry? :-D

You really ought to be paid for writing like that!

(PS - I have known horses like Kid - love those older horses with that built-in work ethic!)

The crazy thing about this whole thing is that if Peta succeeds, unless all of a sudden lots of people want drafts, they will probably be sold to canners. I love those guys, but I can't afford to take Bart, Jim, Bob, and Charlie. The economy sucks too bad right now. How many people can really afford to buy those horses for what they are worth? That is one thing that I just don't get about these activists. They would rather see all of these horses dead than happy and working.

I just heard a metaphorical story about slaughtering all of the draft horses in a kingdom, if I can get a hard copy, I will send it to you (do you ever go to the Timpanogos Storytelling festival? Its awesomesauce!! and its this weekend!!!)

Oh man...I'm gonna send an email to these retards...this is just ridiculous.

Over the weekend a little boy was killed when he got caught under the wheels of a flatbed being used on a family hay ride. The flatbed was being towed by a pickup truck. It was an unfortunate and tragic accident that happened here in Utah.

Will we be seeing concerned citizens protesting for the end of pickup truck use, or the abolishment of hay rides? No. Why? Because no horses were involved, that's why.

Will we be seeing parents up in arms because a child was doing something out of the ordinary, not in a car seat? No. Why? Because no horses were involved, that' why.

But if it had involved a team of drafts the pitchforks, torches and mob would be out wearing their PeTA t-shirts in force.