*It Must Be Something In The Dairy Air

My tribe took a ride north this weekend to visit Wease. Because her house is small we brought my travel trailer along to stay in. So, essentially we camped in her front yard. 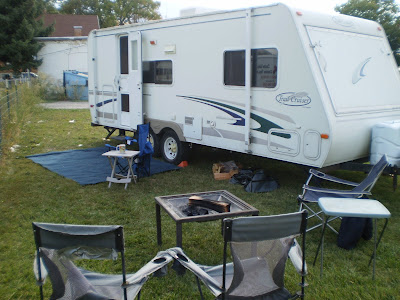 All six of us were there Friday night; ~A~, Oli, Bill, The Fabulous Todd, Wease and yours truly. We went to a restaurant down the street from Weases for dinner because when we get together we tend to drink a lot, and after the first round of drinks we don't drive anywhere. The restaurant is within walking distance, so they get a lot of our business. A lot.

We checked on Kid, retired carriage horse, and fussed over Wease's new baby. 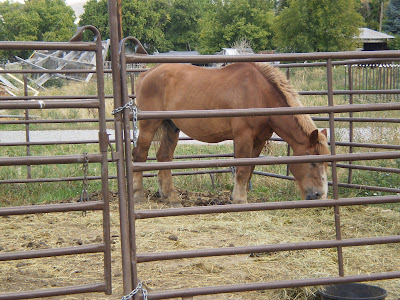 "Slave Driver fussing over a new baby?" You wonder."Is she sick or something?" 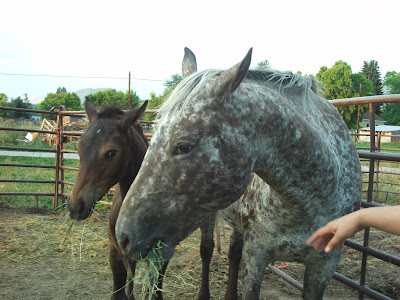 Well, it's a horse baby, so yes. If it had been the human kind we would have avoided Wease's place like it was infested with plague carrying rats and perfume snipers from Dillards. 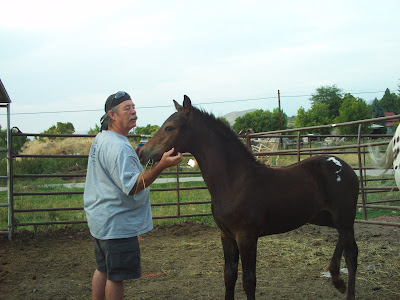 Wease took The Fabulous Todd and I on what she calls "The Cemetery Tour", which is a ride through her neighborhood to, you guessed it, the local cemetery. It was quite beautiful, and Kid did excellent, only acting up a bit when a curious cow stood at the fence and mooed at us. Kid, you see, is a city boy, and it confirmed my suspicions that our horses are desensitized to the noise and pace of the mechanized city but if confronted by a bovine they would have reservations. Kid's reaction was to pick up the pace and jog a bit, which was a little uncomfortable for me since the gig is a two person vehicle and we had stuffed in three, The Fabulous Todd essentially sitting in my lap. 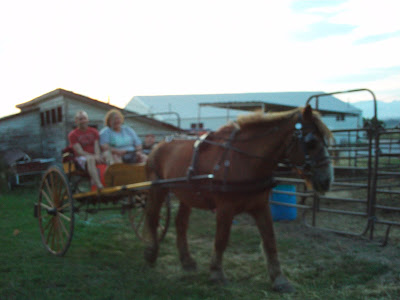 Wease wanted to show us a secluded house she likes, so under cover of darkness we rolled up their private semi-circular drive, Wease admonishing us to "Shhh," since we were giggling the whole time. Of course the clomping of Kid and crunching grind of the buggy wheels was totally not noisy… We called it an Amish Drive-by Shunning, and I have to wonder what the owners thought the next morning when they found wheel tracks and hoof prints in their driveway…

I imagine it was a "WTF" moment.

Upon our return we drank a lot more and played Rummikub, during which our conversation turned to a well worn topic—Zombies.

(I bet you thought I was gonna say Radical Animal Rights Activists, huh? They do have certain similarities.)

Wease noted that since my trailer has sleeping areas that flop down and are soft sided, similar to a pop-up camper (referred to in the Western RV camping world as a "Grizzly Bear Boxed Lunch") that Zombies would have easy access to the area where certain members of our tribe would be sleeping. Wease, you see, keeps a sword hanging on the wall in her living room, a la "Sean of the Dead", in case of an attack, stating that, "One can never be too careful when it comes to Zombies."

I had always thought the quote was "One can never be to rich or too thin", but that obviously does not apply to us.

We mapped out our plan, just in case, and it was decided by a majority that since Bill was inebriated, he would sleep on one end and be used as bait, so the rest of us could escape into the house to barricade and arm ourselves in case of an attack.

Bill, however, foiled our plan by sleeping in his car. Luckily the night was Zombie-free.

Saturday morning brought the end of the visit of both The Fabulous Todd and Bill, both of whom had other, seemingly better, things to do, so they left and we decided to go into Idaho for breakfast, a bit of shopping, and lottery tickets (no gambling of any kind is tolerated legal in Utah). 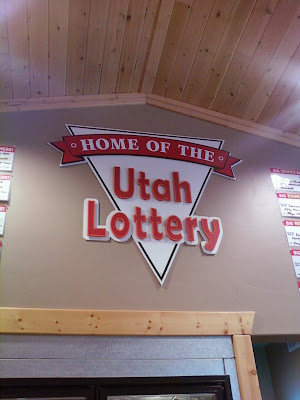 We were also running a little low on booze. Go figure.

After shopping we spent the rest of the day drinking, eating, and playing Rummikub, with the exception of taking a break to watch an old movie called "The Dancing Pirate" which we picked up at a five and dime in Preston, Idaho, mocking it Mystery Science Theater 3000 style.

We even manages to have a campfire and roast marshmallows. 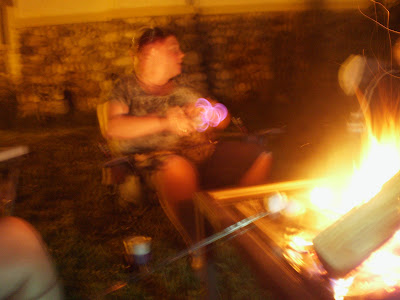 And, of course, we got tattoos, which is traditional when we go visit Wease. They're the stick on kind, but it still counts. Because, as everyone knows, Like garlic for vampires, tattoos ward off Zombies. Which is another reason we used Bill for bait. He does'nt have any. 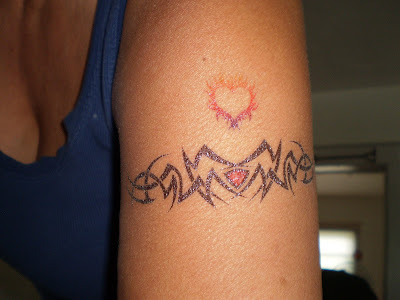 We never did fall victim to a Zombie attack. We did, however, learn that Oli not only considers "7" to be a number, but it's also a color.

*Cache County, Utah, is famous for its dairy products. The overall odor surrounding Wease's home can only be described as "cow".
Posted by Lisa Deon at 9:49 AM

Nice posts! Love the Kid pics, and the mom and filly, aaaaaaaaaand the drunk blurry pics :) Those are always mandatory with those trips :)

Well, for the biggy ride it was getting dark and my cheap cam corder does'nt do "dark" very well. And the campfire, well, no flash, so that's the story I'm sticking to...

One night in the Sierras, we got a camping spot because some people had left the campground after a bear attack. Those honeys can rip the door off a Buick, and a Winnebago would be no problem, either. My dad got around the whole thing by sleeping on the picnic table.

WTF? Bill has NO tattoos? What kind of extremist is he?
Dusty

It appears that Zombies, while able to kill and eat people althought they are slow moving, stiff, and go "Ahhhrhhh" which makes them kind of noisy, are very weak, so tearing canvas or breaking glass is about as destructive as they can get. Not being an expert myself I must rely heavily on information from Wease.

Bill, on the other hand, refuses to get tattoos and attempts to minimize his scars and moles as to not have any identifying marks just in case one day he needs to go underground and live in South America.

I no, I am not making any of that up. Of course he's 60 now, and if he's planning to go off the grid and live on a compound in the Andies somewhere I'm not sure exactly when he plans on doing it since it is my firm belief that radicalism and anarchy are a young mans game. Most days he spends sitting on his porch with his dogs drinking beer.

So glad you got a change to get a weekend away and enjoy the company of friends, not to mention campfires on the table. [WTF?]