There Must Have Been Something In The Water 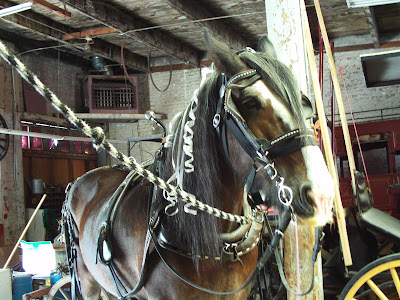 Bart, with girlish ribbons in his mane, which he was not happy about, but sometimes it comes with the job
(This pic's for you, BPA)

I worked Friday night. Nothing strange or unusual there— I work most Friday nights, unless 1) I have other plans 2) there are too many people already signed up and I know I won't make any money or 3) It's conference weekend, which only happens in the spring and fall or 4) I'm doing a specialty off site or 5) I've forgotten to sign up which is rare and even if I do Ro will call me up and write me into the schedule anyway. So, working a Friday is not a new or different experience.

Odd things happening during the course of an evening is not unusual either. We get visits from the Drunken Horse Whisperer, fistfights, and customers making strange requests. We handle all of these things on a regular basis because we have to. We work in an arena filled with the general public, in all weather and traffic conditions, because it's part of the job. There is no status quo for us. A driver must be able to think on their feet and often has to improvise. What is a strange and unusual occurrence is to get your monthly quota of weird shit all in the same night. That was this past Friday.

The evening started out normally; Kar had a trainee, several of us had appointments. We stood at South Gate killing time when from across the street at the construction site one of the workers, up in the air on a man-lift, had a melt down and started swearing at one of his co-workers. We listened while he screamed and yelled, dropping the "F" bomb numerous times, until the foreman came over and put him in a time out. Normally, this wouldn’t be an issue, because the Trax train, traffic, and noise coming from the construction site would mask the obscenities, but for some weird reason at that point in time our block was almost silent.

That little piece of street theater concluded, and then it was time for appointments. Mine was at 7:15, and I was to pick a family up in front of the Artspace condos on 200 South, drive them around for half an hour and drop them at Abravanelle Hall for the Cirque de Symphonie performance. All was well, and kind of slow, as I waited to leave from South Gates, when the wind picked up and a front came in. I was hoping that it would pass, but Kar gave me her trainee because I had my appointment and she was still standing at South Gate trying to sell a ride. As the trainee and I headed out for my appointment, which I left a little early for (because I'm anal retentive and hate to be late) the rain started so I pulled the carriage over on West Temple and we put the top up. When we arrived at the pickup point the family was waiting on the street so I flipped a u-turn and they got into the carriage. Going forward to the light, we were waiting for it to turn green when a gust of wind picked up a 3ft X 3ft wooden "Event Parking $3.00" sign and, with much noise and clattering, blew it from the north side of the street across all five lanes to the south side, behind my carriage, where it came to rest on the sidewalk. 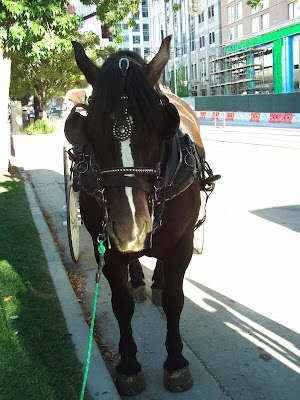 Charlie Horse, during a lull in the insanity

Now, I'm going to discuss "having an out". When I drive either my car or my carriage I always try and have an "out". That is an escape plan. When I stop somewhere I always check my surroundings and see where I could go if I have to move out of the way in a hurry. I look for holes in traffic, open access to the sidewalk, curbs I could go over (you'd be surprised how well a carriage can handle a curb if you take it straight on) and I like to give myself a lot of room in my lane in case the horse I'm driving decides to have a fit about something. This is very rare, but as stated earlier, I'm anal retentive and I think about stuff like this so often that it's automatic.

I tell trainees all the time, to do this job you have to be a defensive driver, extremely vigilant, and constantly aware of your surroundings.

My "out" in this case was a right turn, which I did not have to use, although I was prepared to if necessary. So when the sign became a missile, rolling across the street, almost nailing a pedestrian on the sidewalk, making Charlie do a vigorous tap dance, I was prepared to make a right, but he calmed down and the situation was handled in a safe and secure manner.

I finished the ride and returned to South Gate. A little later I hooked a ride up to Memory Grove. It was a young couple, casually dressed, nothing different or unusual. On the way up Canyon Road, I passed Kar, and it appeared that she had long streamers, at least 30 feet, hanging off the back of her carriage. It was strange, but I figured she knew about it so I didn't say anything.

I went into the Grove and back down, and was almost to the gate when the young man in my carriage whispered in my ear, "Can you pull over for a minute?" I stopped Charlie, and the customer proceeded to get down on one knee and propose. This was only weird because it's typical to do "it" at the bridge, or in the park, not on the carriage almost out the gate.

Eh, what are you going to do? It's not like we have a sign in the carriage "To propose properly, ask the driver to stop at the bridge, get out and do it there. We'll pick you back up on the way down."

The girl, while ecstatic that he had popped the question, was a little embarrassed because she was wearing sweats. She had planned, she told me, on having dinner with his sister, and he had surprised her by showing up instead. So now, instead of that little black dress I'm sure she has tucked into her closet, whenever she puts on her "Raging Waters Lifeguard" sweatshirt, she will be reminded that this was what she was wearing when she got engaged.

I got back to South Gate. ~A~ pulled up behind me just as a red sedan came to a screeching halt at the corner of South Temple and Main street. The door flew open and people started yelling and screaming, the driver attempting to pull a passenger from the back seat. All kinds of swearing was going on, and I thought it was going to get violent so I called the cops to report a domestic issue, but they passengers exited the car, it took off down Main, and the people walked away.

Finally, Kar returned from her wedding appointment, and we mentioned that all of us were happy not to be driving our carriage right behind her. She had no idea what we were talking about, and got off the carriage to look at the back. Her wedding people had, unbeknownst to her, looped several rolls of toilet paper behind the carriage (that was the "streamers" I'd seen earlier) and she'd been driving around town like that for about an hour.

Weird shit happens to us all the time, but not usually all in one night. It wasn't a full moon, so there must have been something in the water.
Posted by Lisa Deon at 10:34 AM

There's nothing in the water, or the air, it's just...Utah.

Glad you all came through it okay. Didn't the cops pull ~A~ over for trailing TP? What kind of sign would you need to put up for that? "Soft Load?" Nah. That sounds . . . unpleasant.

Spam word: rockin
How did the spam catcher know I just got my first EVER invite to my high school reunion? Their website sounds like the soundtrack from Dirty Dancing, a stupid flick with great music. Argh.