Dreamer, the day I got him

This blog is called "Confessions" of a Slave Driver, so I'm going to confess something to you;

My horse, L.P. Prairie Dreamer, is a World Champion Halter Horse. This means that at one point in time he was considered, by a club, to be the finest specimen of his breed in that club at that time. And I even have a halter to prove it. How we got it, however, is rather unconventional.

We purchased Dreamer in July of 1992. At the time the breeder we got him from was showing him on the Appaloosa Horse Club circuit (ApHC) in Geldings of '89, Most Colorful, and a stupid class called "Suitability for Dressage". Now, the first two classes involved walking your horse out into the arena and having the judge gauge him against the other participants for conformation and Appaloosa markings. He's a little guy, 14.3 hands but with excellent conformation, but at that time in the horse world there was a stud named Impressive who had been used to breed into the Appy, Quarter horse, and Paint breeds. Impressive, and conversely his get, were built like brick shithouses. Imagine, if you will, a horse with spidley legs, small feet, and ugly head, and a body like a Sherman tank. At the time, this was considered the epitome of Horse Perfection. Of course, the ultimate way of moving was called "Peanut Pushing" because the horse jogged with his nose almost touching the ground. Both of these eventually went out of fashion, along with ugly shirts and "taco" cowboy hats, but Impressive left his mark on the horse world, unfortunately with a muscular condition called HYPP, but that's a story for another day…

Anyway, when we purchased Dreamer he had enough points on him to be eligible for the ApHC World Championships being held that year in Fort Worth, Texas. Excited, and with huge dreams of having a World Champion horse, we assured the breeder that we would take him to the "World".

Besides being registered with the ApHC, Dreamer was also eligible for a registry known as the "Colorado Ranger Bred" Horse. This is a very selective group of equines that are descended from one of two studs, Max#2 and Patches#1. The history is interesting, and you can read all about it here, but being that I was a newbie at owning a horse, I made sure to cover my bases by registering him in the two afore mentioned clubs, and a new one I had read about in a magazine, the International Colored Appaloosa Association (ICAA).

We never showed him in any of the Rangerbred shows, but it was pretty cool that he was eligible for their registry.

So, we went about the rest of that summer and autumn, showing him not only at "A" circuit shows but also little backyard and local riding stable shows too, to accumulate points for the ICAA's open show point program. It was a time in my life when Mr. Slave Driver and I were DINKS (Double Income No Kids) and we had both money and time to burn. Almost every weekend was filled with horse shows and the accumulated travel and experience that accompanies such. 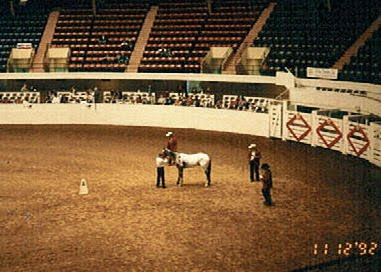 Dreamer at the 1992 ApHC World Championship Show in Fort Worth, Texas


By the end of the showing season, Dreamer, who already had enough points on him to attend the ApHC World in November of 1992, was also, I was advised by the ICAA, in the running for the Champion of the adult division of the ICAA. This was very exciting stuff for me. All those long hot weekends spent running to non-A circuit shows paid off by accumulating points that eventually made us the winners! My horse was to be presented his title and all the accompanying accoutrements the following August in South Haven, Michigan at the ICAA's championship show. Would I, the ICAA secretary asked over the phone, be able to attend?

"You betcha!" I told her. It was January of 1993. We had taken Dreamer to Fort Worth in November of 1992 and it was a bust for us, although he did receive a 6th place ribbon in the "Geldings of '89" class. They place 1st - 10th at The World, and 6th sounds pretty good for amateurs like us. Of course, when speaking to a group of seasoned horse folk, we would neglect to mention that there were only six entrants in the class, so 6th was actually last. But that's a minor detail that was conveniently overlooked. I got a ribbon. Technically, it still counts…

Fast forward to August of 1993: I am asked to attend the ICAA Presentation of Awards Show. I'm also requested to drive from Northern Illinois, up to Kenosha Wisconsin to pick up the Junior Champion, her horse, and her guardian. Then I get to drive the three of us, along with two horses and our dog, Stormy, back down around Lake Michigan, take a left part way through Indiana, and go north into South Haven, Michigan. I do this during the height of Construction Season, driving a 22 foot motor home, pulling a two horse trailer, with no air-conditioning because the RV's thermostat keeps edging towards the red zone. It's predicted to be in the upped 90's with 90-95% humidity all weekend. Ah…weather in the Midwest! And the best part?
I'm now seven months pregnant. 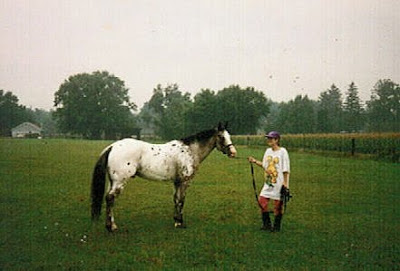 Dreamer and Slave Driver in a field, South Haven, Michigan

But I did it. (Looking back I see now that I was insane.) The junior champion's guardian was no help at all- she'd never driven a vehicle larger than a pickup truck, OR hauled a horse trailer (that was her husband's job…) We made it up to the show grounds, only to have a thunder and lightning enhanced downpour the next morning. 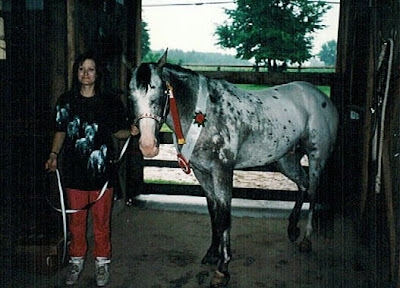 The show was cancelled, and our awards were presented in a tiny barn on the show grounds. 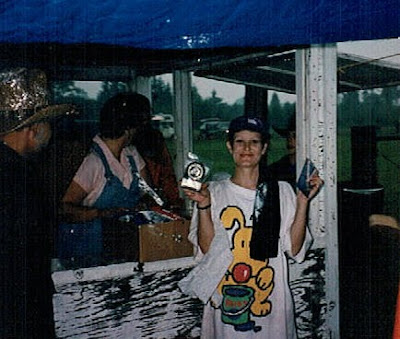 Dreamer, she advised, was the winner of the 1992 ICAA Adult High Point Halter World Championship because…He was the only horse entered.

But, technically, it still counts… 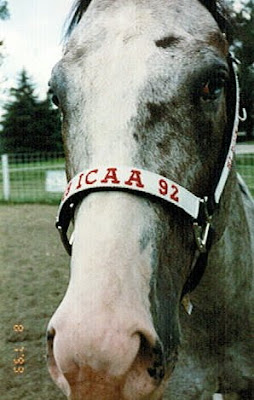 And, no matter what the numbers say, he'll always be a champion to me.
Posted by Lisa Deon at 11:51 AM