My Worst Nightmare, Three Days Of Witching, And Scoring A Bonus…

My little world for the next month 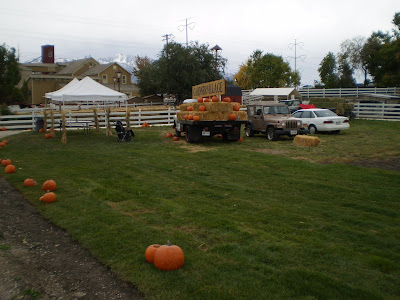 Imagine, if you will, my worst nightmare. Remember, now, we're talking me, not you. Zombies, snakes, ninjas, drunken horse whisperers, the IRS…not a problem. I usually have some type of weapon handy for any occasion, plus I think snakes are cool.
Loading the hay ride 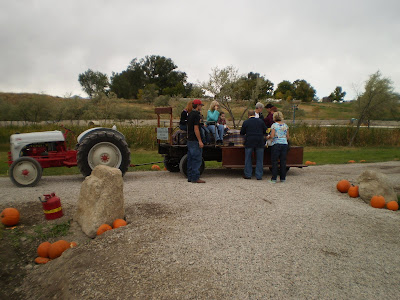 My worst nightmare is to be surrounded by free-range children. "Free-Rangers", as those close to me know them as, roam around unfettered by the attention and direction of their parental units. You've seen these children; they are the ones climbing on the back of your restaurant booth and rubbing tartar sauce or ketchup in your hair when you've sat down for a quiet meal at the end of the day. They run, usually screaming AT THE TOP OF THEIR LUNGS, through the airport/supermarket/doctors office while their tired and apathetic parent lollygags behind, hoping to distance themselves both literally and figuratively from the little urchins. They are the small and less than charming individuals that make me withdraw into my mind where I quietly watch the cartoons in my head so I do not react in a manner that will feature me on the evening news.

So, for the last three days I've been working as a witch (you may hold your comments. I am not oblivious to the allegory.) We're situated out in a field away from the center of the shopping area. This is good because, while the ride is geared towards children, I am not surrounded by them like a chunk of chicken in a pond of piranhas. They have to come all the way out to the back forty, accompanied by their parent/guardian, in order to ride out to the witch's house. Occasionally there is a short wait for the next tractor pulling the hay wagon, so they mill around, bored because their attention span is shortened due, I feel, to an MTV based society where everything happens fast.

Coco and Slave Driver during a break in the insanity 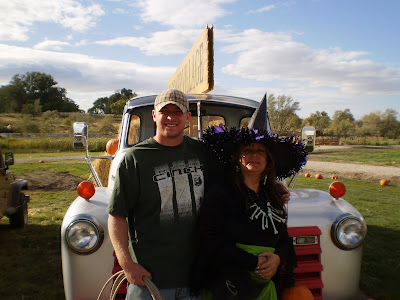 The milling around includes but is not limited to the following activities:

Jumping the ditch filled with water

Throwing gravel in the water

Throwing handful's of gravel in the air

Throwing gravel at me

Having their photo taken on the farm truck 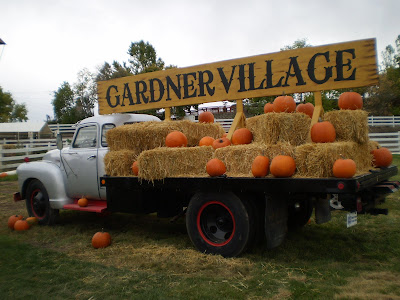 Throwing pumpkins into the ditch.

When the last action occurred, and a young miscreant picked up a pumpkin to toss it into the ditch (which, by the way, is filled with fetid, scummy water that smells like ass) I took the opportunity to say, "No!" I was rewarded with a pouting glare from the child and a nasty look from the mother. I don't care, I have no intention of spending the rest of my afternoon wearing a costume that looks and smells like I store it, wadded in a ball, inside the chest cavity of a rotting Yak. So, while the parent was busy conversing with her friend, I was on child watch. Just so you know, I don't get paid extra for babysitting. 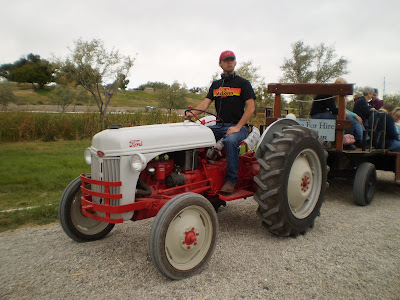 I do not drink and drive. Needless to say by the time I get home I am salivating for a big ass glass of wine to temper the urge to snarl and lash out at the next person I see. Just as I've trained my family to not speak to me in the morning until I have had at least one cup of coffee, silence reigns in Slave Driverland until I've enjoyed an adult beverage upon my return from Gardner. Then they may converse.

So I did three days in a row as a witch which lent me a new appreciation for Ro because it's usually her job. But I think I did okay, because I scored us a bonus. The people running the parking concession this weekend at Gardner are the same folks who also operate almost all of the pay-to-park lots downtown. The manager introduced himself to me, we chatted for a while and when he found out that not only am I a carriage driver but I also help manage The Rose Wagner theater during the Sundance Film Festival where I pay to park in one of their lots, he gave me some of his business cards. Normally the exchange of business cards is not unusual between entrepreneurs, and while the card I gave him will get him a 10% discount should he care to indulge his family in a carriage ride, the card he gave me, he explained, will allow me (and Ro, and the carriage barn owners, because he gave me a bunch of cards) to park in any of the lots operated by his company for free.

Score one for the win! Yay! Because if you've never seen Ro and I, out to lunch, circling the block like turkey vultures over a carcass looking for free parking, you have no idea what kind of a perk this is. It so makes up for the dead Yak smell.

Coco practicing his roping during a little down time 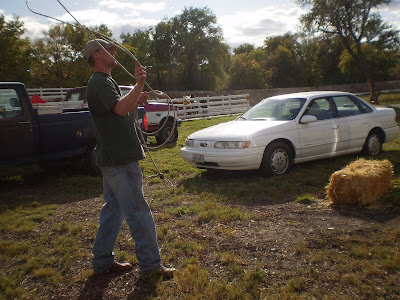 Curious about the names "Hardrock" and "Coco?" I grew up in the Midwest watching WGN television

Too, too funny! I live in a similar coven here in the cornfield where I've considered the spit roasted free range children recipe many a time.

Good for you for going the glass of wine instead of the evening news route.

Thanks for the chuckle.

That is indeed a fine looking truck--also tractor. Makes me pine for Roger Welsch, who wrote Old Tractors and the Men who Love Them.

Sorry you were exposed to juvenile units. Hope you bathed and meditated. Of course you did--red or white?